THE ANGEL AND THE ROLLING STONES 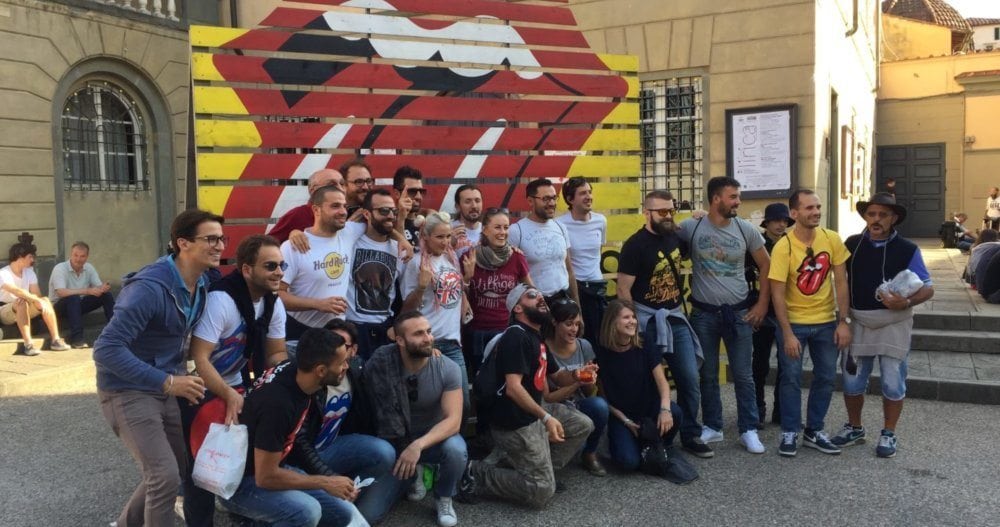 Like an Italian Woodstock, people of all ages and nationalities, wearing Rolling Stones t-shirts, poured into the walled Renaissance city of Lucca, Italy, to see what might be the last tour of the Rolling Stones. A reported 55,000 to 75,000 people made the pilgrimage for the Stones’s #NoFilter European tour, and I was one of them. It’s always a great day when I get to see the Rolling Stones. They’ve been part of my life since I was 12 and had a front row, center seat to their second U.S. performance in San Antonio, Texas.

It’s an even better day when I get to see the Stones and meet an angel.

When my train arrived early Saturday afternoon, Lucca was already a zoo. People were streaming through the gates into the old city, partying in the cobblestone streets and camping outside at the concert venue. 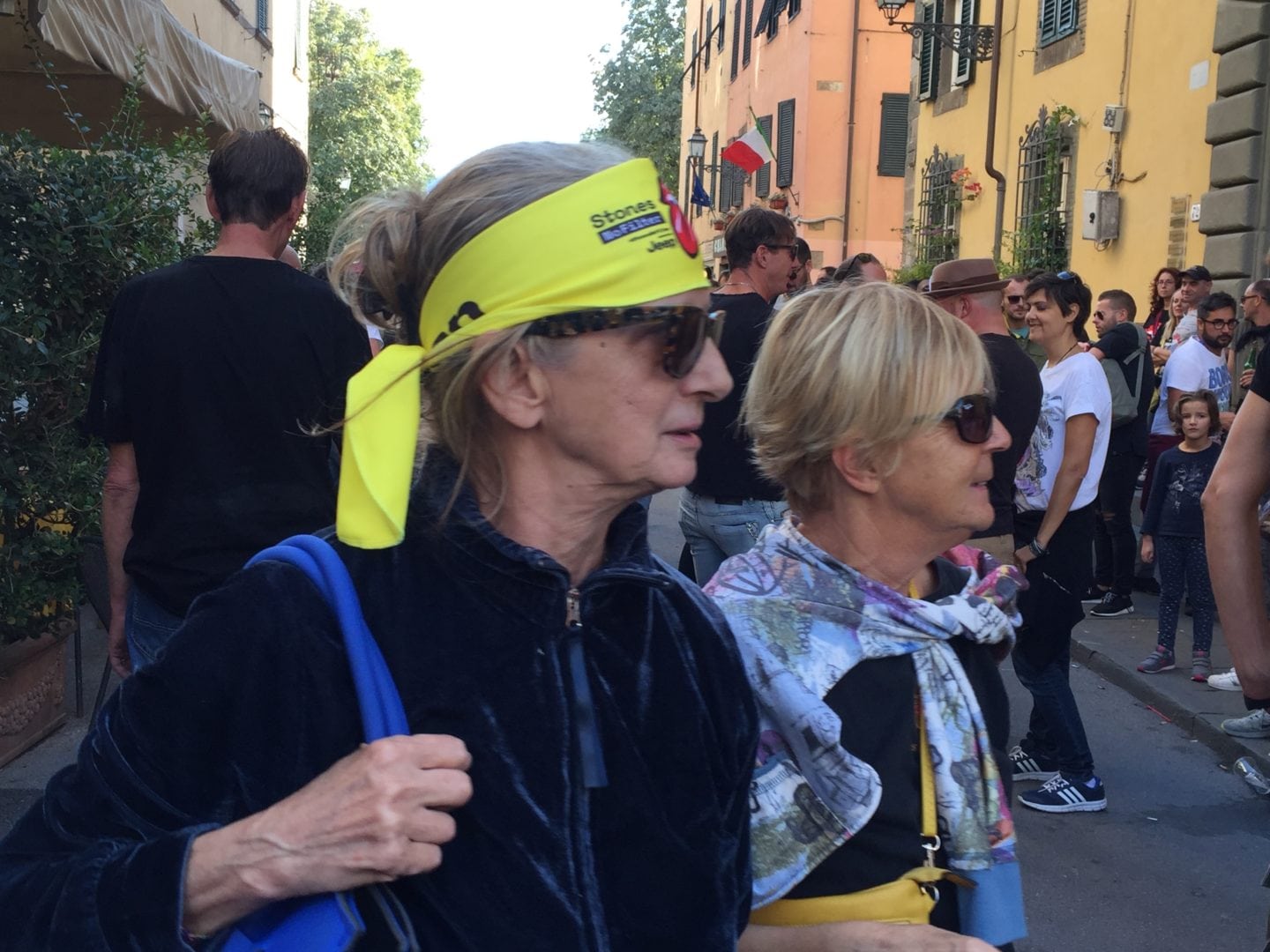 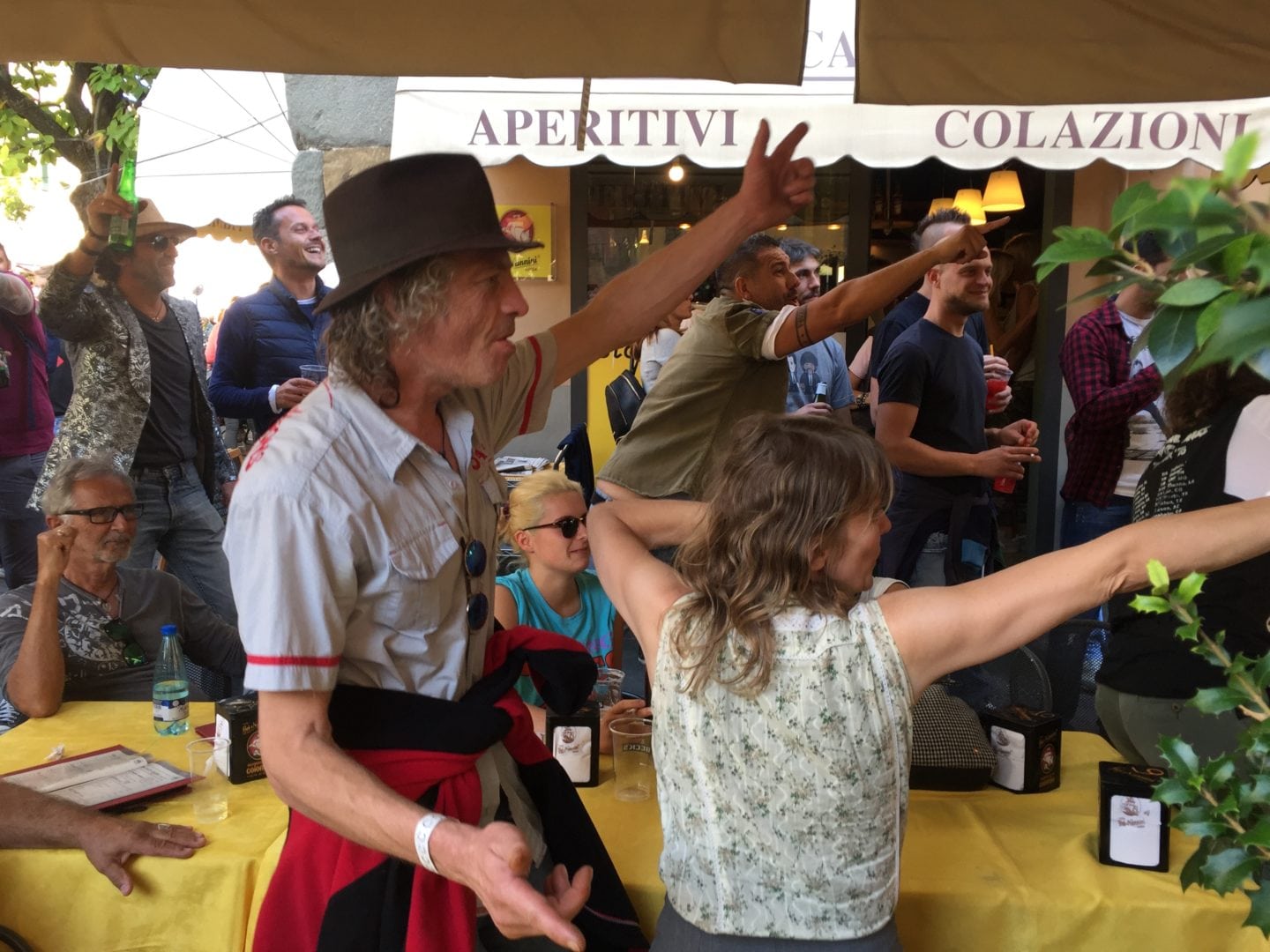 “Paint it Black” and “Satisfaction” were blaring from outdoor speakers at local bars. Many of the revelers I saw would be lucky if they were still standing when the Stones came onstage. 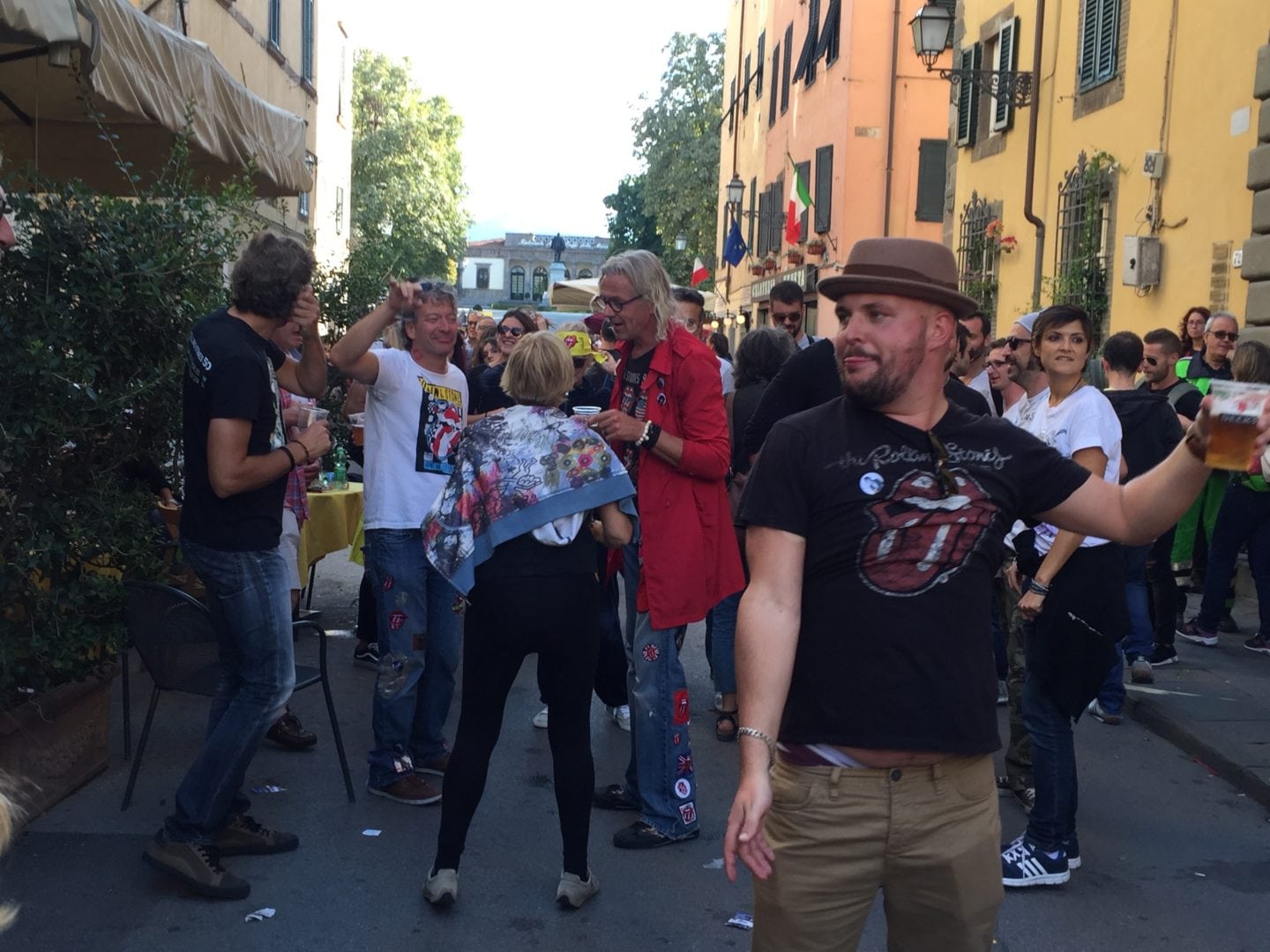 I stood in line for an hour for a taxi to drive me to my hotel outside of Lucca. The hotel restaurant was closed, so I checked in and waited for another taxi back into town. The desk clerk and my first taxi driver said it would be doubtful I found a taxi after the concert until well after 2am. With nothing to eat since 8am but yogurt, finding food and my standing “seat” were my top priorities. 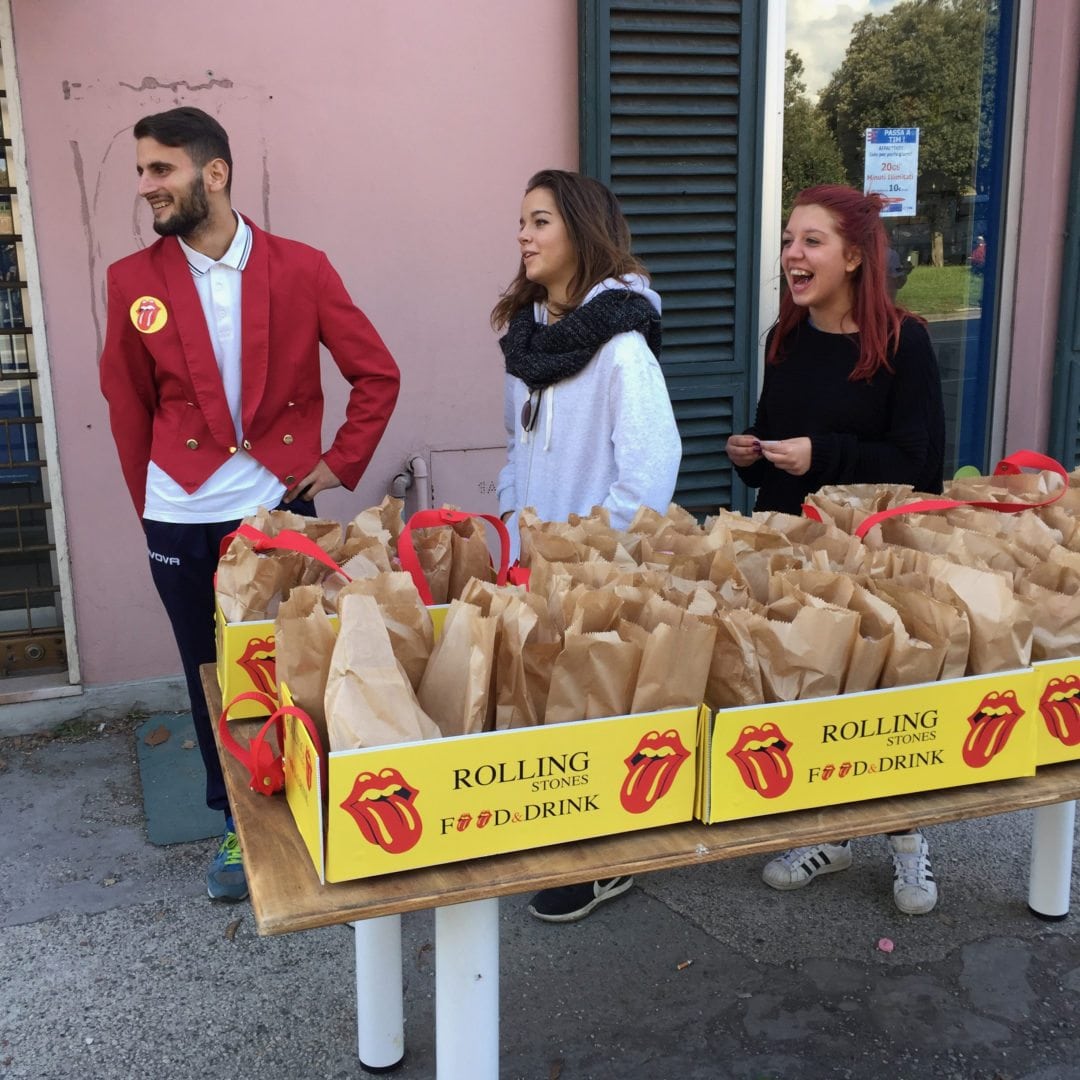 Restaurants and cafes were jammed and long wait lines danced in the streets. With a bottle of water and a prosciutto and mozzarella sandwich from a street vendor, I found my Preferred “Seating” gate on the other side of the city. 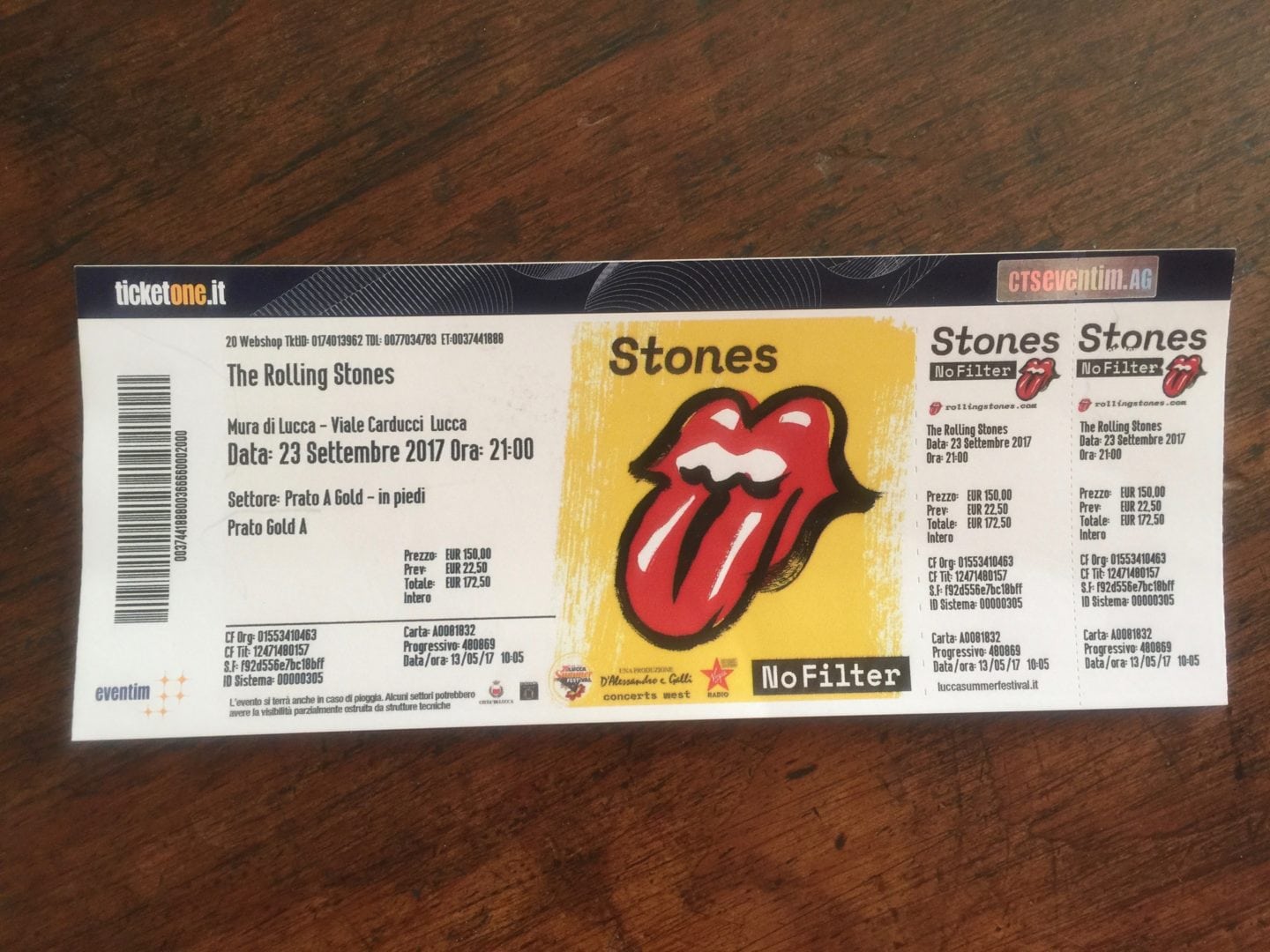 Three security checkpoints and two wristbands later, I pushed my way through the crowd to about “fourth row center.” Thousands of people unfolded behind me as far as I could see. 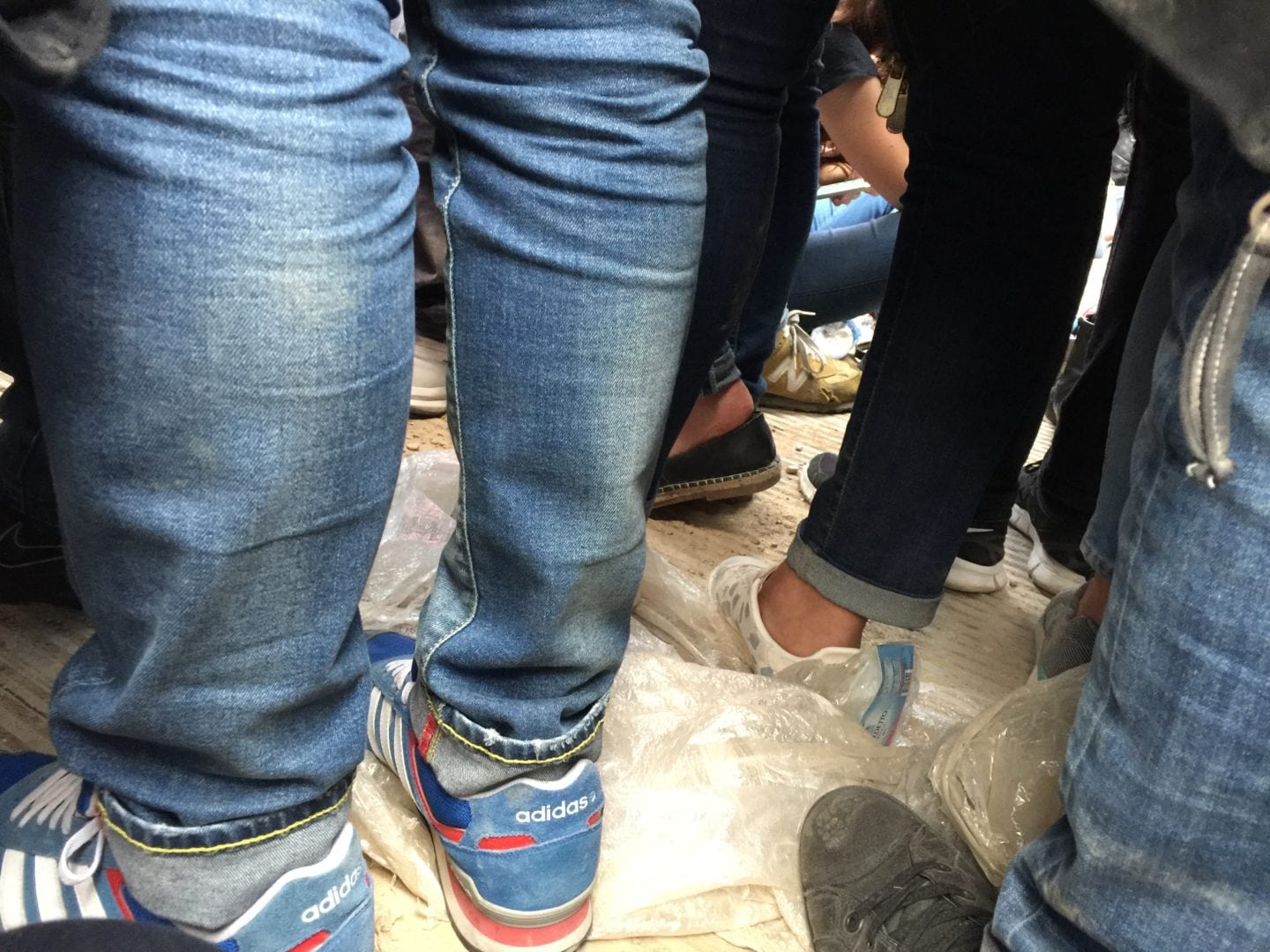 With five hours until showtime, I claimed a cramped spot where my feet were and sat down. For the next 90 minutes, my view was nothing but legs. 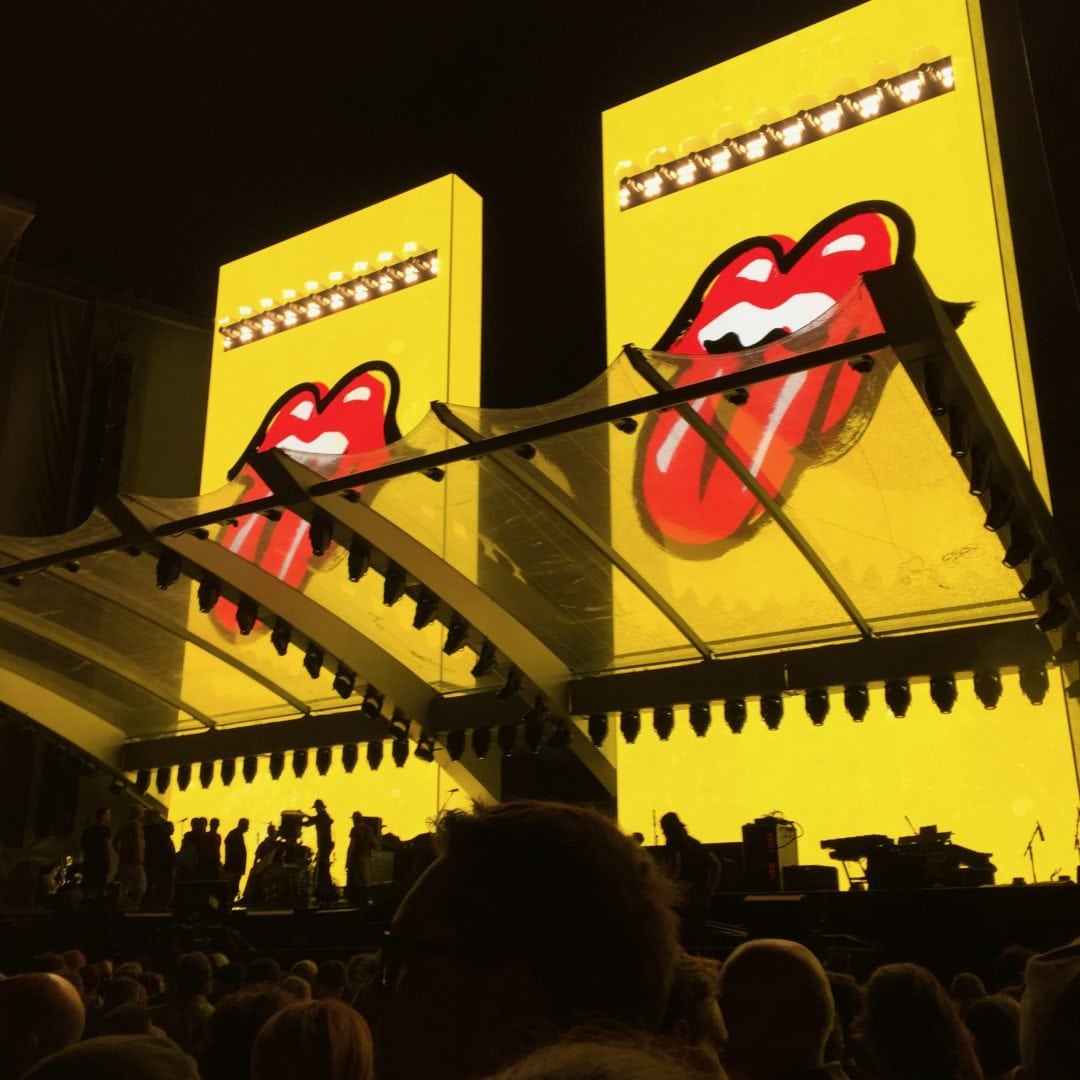 As though an inaudible “On your marks. Get set. Go!” had sounded, the crowd surged in mass toward the front barricades. I scrambled to my feet. We were the proverbial sardines in a can. My fourth row center spot now consisted of 100 people ahead of me, and we stayed, welded together like that for the next three hours. 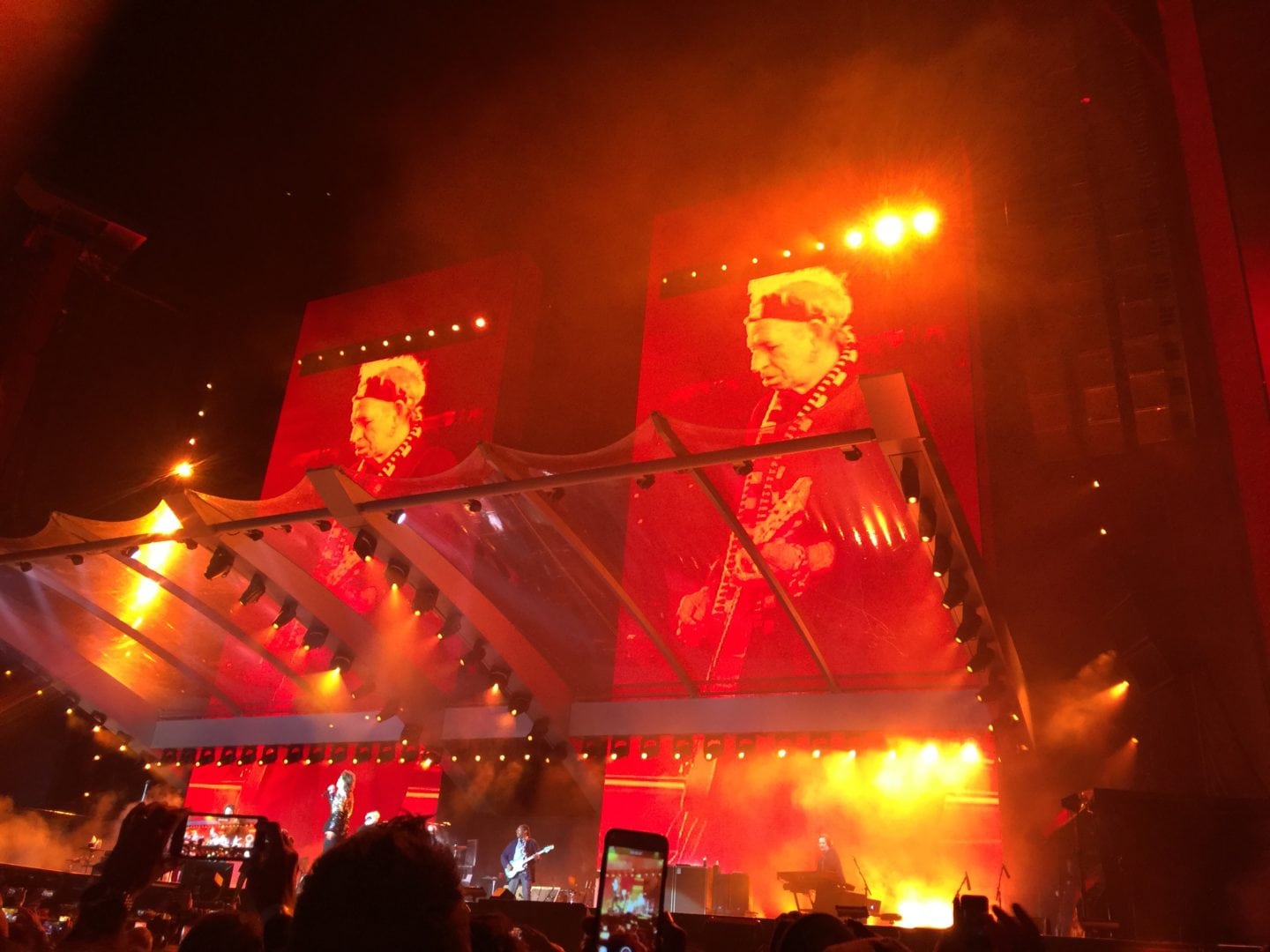 At last the stage lights flashed red as rock ‘n’ roll fire and brimstone erupted. Drums and piano and “Woo Woo” announced “Sympathy for the Devil,” and the Stones took the stage. With a kaleidoscope of big “Keiths” on the screens, the audience went wild, and the crowd surged again. 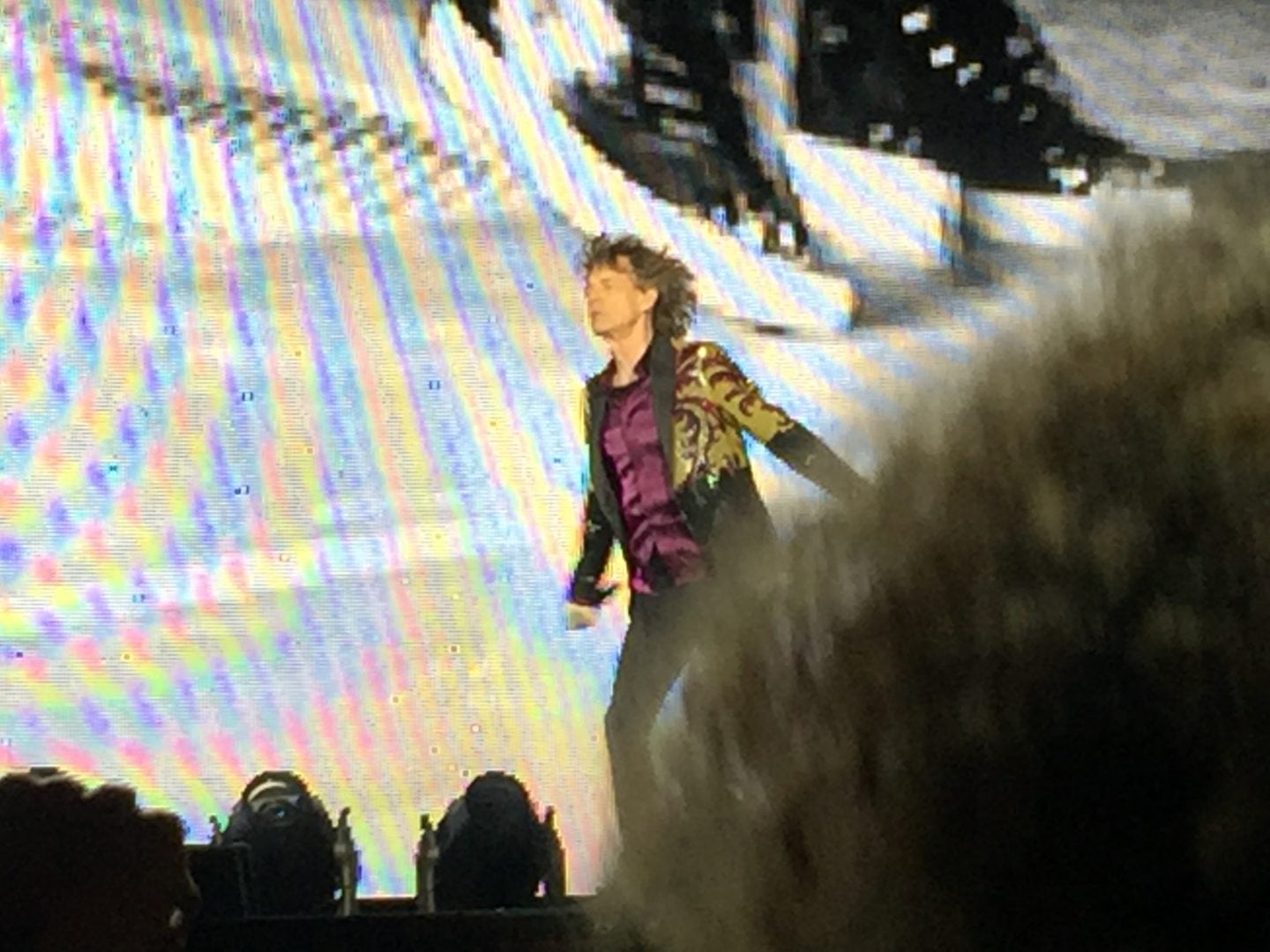 I couldn’t see Keith, Ronnie or Charlie but got one glimpse of Mick as he strutted down the ramp in front of me. I was trapped in a haze of cigarette smoke and marijuana from the tall guys in front of me, and the guy behind me was doing pelvic thrusts into my… back. 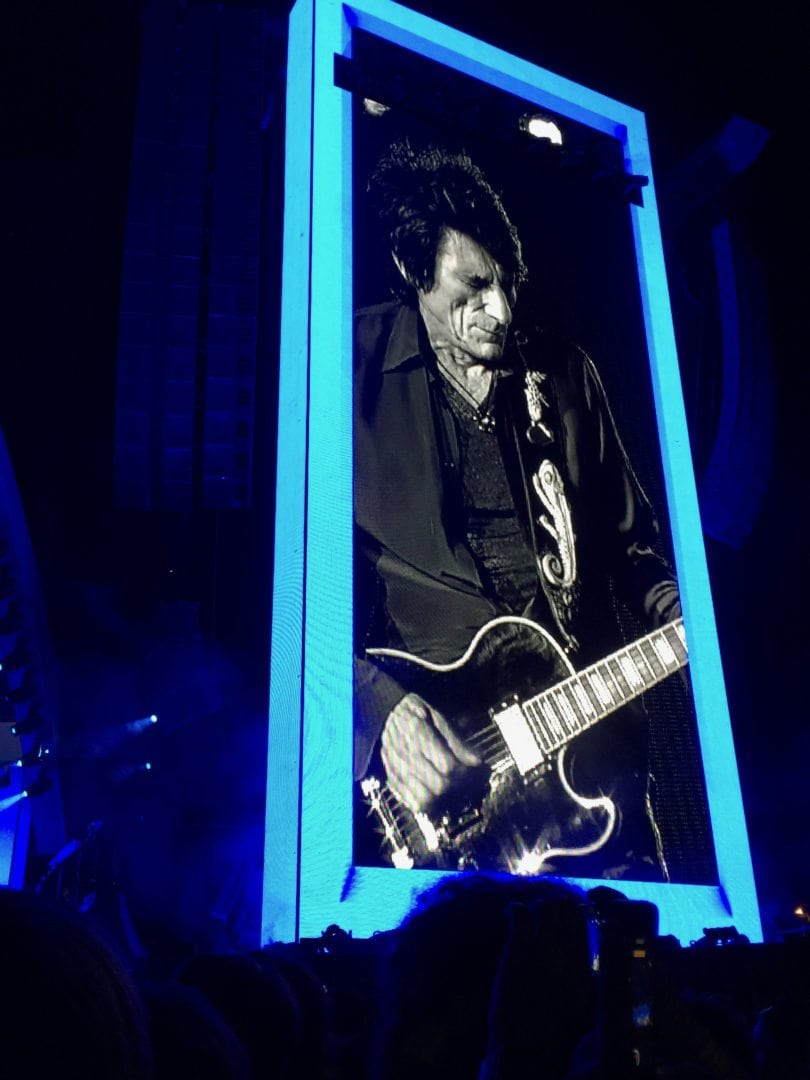 Thirty minutes in, I couldn’t see the stage except on ginormous screens. I felt lightheaded like I might pass out. No… I wasn’t stoned, but I figured I was dehydrated and low on potassium. Thanks to chemotherapy–13 years ago for breast cancer–this has happened before when I’m low on fluids. I remembered if I exited security, I couldn’t return, but I knew I had to leave before I passed out. I said a quick prayer and asked God to help me, then fought my way through the crowd.

Out on the street four EMT techs passed me, each holding the corner of a blanket, bearing what looked like a dead woman. They carried her past a parked ambulance and put her in the trunk of a car.

I stopped at the ambulance and told the nurse I was lightheaded–maybe dehydrated–and my blood sugar was somewhere down around my knees. Did she have some apple juice or water? She handed me a bottle of water and ushered me into the ambulance to take my blood pressure.

Two guzzled bottles of water and a packet of sugar later, I asked where I could get a taxi. Since I couldn’t see the stage or reenter the venue, I might as well get a jump on finding a taxi and some real food. It wasn’t an easy decision, because more than anything, I wanted to see Keith and the guys I’d grown up loving.

The best place to find a taxi was the train station on the other side of town. I was still wobbly, and it was further than I was up to walking. While the EMTs couldn’t drive me there, they could drive me to the ER… After much discussion in pidgin English/Italian, we settled on what the nurse referred to as “the chair.”

I was strapped—across my chest and lap—into a flimsy wheelchair that looked like it came from the Dollar Store.

One EMT tilted me back on two, tiny, rear wheels and pushed me down a dark and bumpy Etruscan street, while the other EMT used the flashlight on his phone to look for debris. I gathered the chair’s tiny wheels couldn’t handle anything bigger than a piece of salami. As we rolled further away from the concert, the sound of the Rolling Stones grew fainter and fainter, overridden by the rhythmic noise of the chair.

Neither EMT spoke English, but they seemed to be arguing about which one was going to push me through the line of armed soldiers ahead. With permission from the men with the automatic weapons, the EMTs pushed me across the plaza to the train station… the same spot where I’d waited an hour for a taxi earlier that day.

As if on cue, a taxi rounded the corner, and the three of us—me still strapped into the chair—waved our arms like crazy people.

The driver pulled along side of us and said, “Hello, Madam. It is me! Are you all right?” It was the same driver who’d taken me to my hotel.

Without missing a beat and in all seriousness he replied, “No Madam. I am an angel.”

His speech was proper and well-modulated with not a trace of an Italian accent. He reminded me of the actor, Ben Kingsley: bald, a bit shy and short in stature.

I climbed into the front seat and told him I needed food and water. He took me to the first pizzeria and went inside with me. When I’d last seen him, he hadn’t eaten either, so I bought both of us pizza. Gobbling my pizza on the way to the hotel, I kept coming back to, “What are the odds you were the one who pulled up to help me?”

I asked his name. It was Brunello.

The fair to my hotel was €24. He opened my door, and I handed him two €20 bills and told him I didn’t need change.

“But Madam,” he said. “You’ve already bought me pizza.”

I smiled and said, “It’s what you do when you meet an angel.”

My Body Is Not A Project

ARE YOU COMFORTABLE GOING PLACES ALONE?