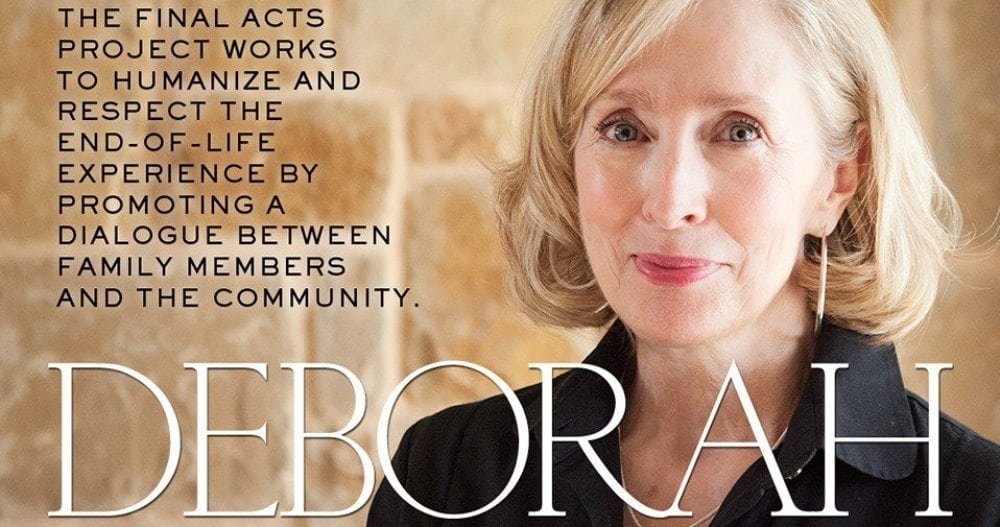 Deborah Kaercher is one of my favorite women. We met a few years ago when I was shooting a television pilot for PBS called “Girlfriends of a Certain Age.” While a major cut in government funding to the arts ended the series before it began, two great things came from that experience: 1010ParkPlace and my friendship with Deborah Kaercher.

Deborah runs a great nonprofit, The Final Acts Project, focused on developing a healthy dialog among family members, and communities, about aging and death. She’s a woman with a compassionate heart, who thinks about life on more than just a cursory level.

WE HAVE LITTLE EPIPHANIES ALONG THE WAY THAT KEEP NUDGING US INTO OUR SENIOR YEARS.

Here’s part of our conversation that didn’t make it into Deborah’s STYLE INSPIRATION  profile.

DEBORAH: I’d love for somebody to take this little skin here, and snip it off my neck.

BRENDA: Either that or a giant C-clamp back here that I can adjust on a daily basis. I had a consultation with a great plastic surgeon who did a soap opera friend, of a friend of mine. I told him I didn’t want a facelift. I just wanted him to get rid of my neck skin. He shook his head and said, “That’s a facelift, my dear.”

DEBORAH: I’m not sure that’s in the cards for me because I have an autoimmune disease, plus on the other side of vanity, sits this woman who’s a little bit too prideful. I feel that aging naturally should be good enough.

BRENDA: Some days I think I’d rather look my age, with all my sags and bags, than to have something done that doesn’t turn out right.

BRENDA: Yesterday I drove James’s truck to where he died and started talking to him. Part of what I said was, “I’ve gotten old since you died. In addition to your death, the same disappointment that killed you—a family member—nearly killed me. There’s no amount of sleep; no eight glasses of water a day that’s going to fix it. It’s aged me and hurt me in ways that’s been hard to heal.”

DEBORAH: It’s hard. There are days when I look in the mirror, and I have a mourning in my heart for what I remember, but no longer exists. I think there are days when my belly is a little more protruding that I want it to be. My backside is sagging a little more than I want. My thighs look like Jello. I think it’s a process. The gifts we were given—which is the vehicle through which we travel through time—and that’s all it is, is like a car. It gets us from point “A” to point “B,” but it wears out. Just like our cars. Just like everything.

The fact that we have this amazing body… Our hands are tools. They allow us to garden; to love people; to take care of ourselves; to do the simple things we do every day. I think we forget to have reference for this gift of body. This gift of life. As women, we’ve been told we need to please. We need to look perfect. What I love about what you’re doing with 1010 Park Place is you’re embracing the aging process—as painful as it may be for all of us. You’re creating a path that allows us to look in the mirror and say, “It’s okay. I like who I am. I like the kind of person I’ve become, and I don’t any longer have to worry about what other people think of me. What I think of me is all that counts.

BRENDA: We’re not going to wakeup one morning and make a sharp right turn. We have little epiphanies along the way that keep nudging us into our senior years.

DEBORAH: I don’t want to be a senior, an advanced senior, worrying about all the wrong things. I want to make sure I’m telling my family and friends that I love them, all the time. I want to make sure I look at what nature is doing outside my window, so I can be in awe, because it’s so fleeting. Your focus to help those of us of a certain age to have a reckoning with this, and yet, still find a way to comfort ourselves with appropriate clothes and makeup… That’s huge!

BRENDA: I appreciate that, but I think it bothers all of us that we’ve got 20-year-olds, selling us wrinkle creams. It’s a complete disconnect. It would be nice if the Federal Trade Commission, would step up and say this is false advertising. You’re leading women to believe this little jar is going to make us look like that, and when it doesn’t, we feel less than.

DEBORAH: There are so many practical things we can do to reduce accelerated aging, like staying out of the sun, finding inner peace, but we look for the quick fix when it’s a lifestyle issue. We need to cultivate an attitude that allows us to feel that it’s okay to rest. That you don’t have to work yourself into a pile of ashes at an early age. The idea of moving into my senior years without a lot of conversations around that reality is problematic.

BRENDA: You’re also stimulating important conversations about dying. I’m reminded of an online friend, in the breast cancer community, who died earlier this year. She’d become very outspoken and prominent about the lack of research into breast cancer that had metastasized.

Before she died, the New York Times criticized her for the extreme treatment she was taking to keep from dying. All of us in the breast cancer community were outraged, as were many of my friends in the NY publishing world. They all asked me about it. First of all, it wasn’t the New York Time’s business to make a judgement call on something so personal, and secondly, they were missing the point. She wasn’t trying to keep from dying. She was trying to keep living so she could see her children grow up. There’s a difference. They were going to have the opportunity to age, if you will, and she wanted to be part of it. So sad.

Sunset on the Beach

TIS THE SEASON FOR PERSONAL CONNECTIONS

What Nobody’s Saying About Self-Care

Paul and Anna in Paris