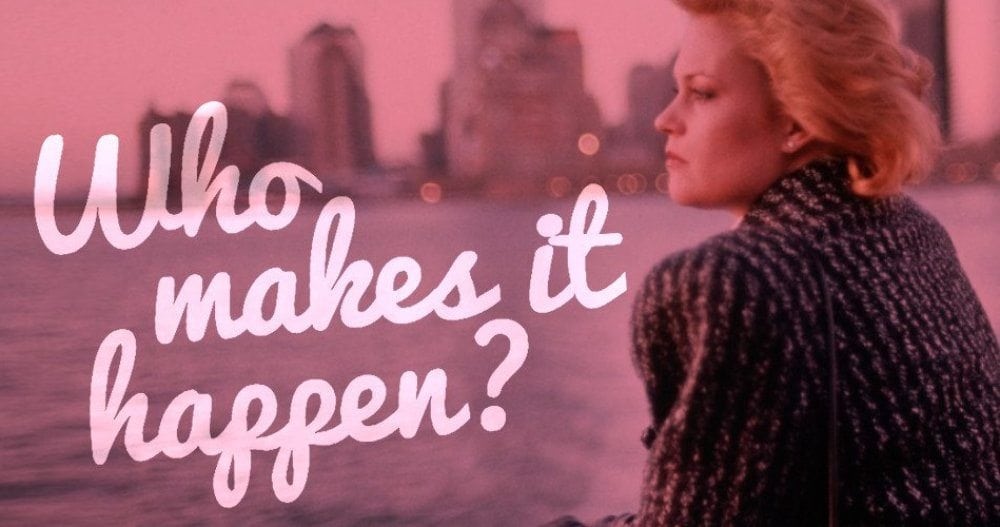 One of my favorite movies is Working Girl. It’s one of those films I can watch again and again. Working Girl is a snapshot of the ‘80s, when women wore power suits and fought for their place at the corporate table. In many ways, Working Girl is as relevant today as it was in the 80s. While women are still working for a place at the table, there is one big difference: Women are helping one another create their own tables.

BY HAVING THE COURAGE TO DREAM BIG, AND ASK FOR WHAT YOU WANT, YOU’VE ALREADY ELIMINATED MOST OF YOUR COMPETITION.

My favorite line from Working Girl is when Melanie Griffiths’ character asks her girlfriend, played by the brilliant Joan Cusack, “Who makes it happen? We make it happen.” It’s a statement every woman should print out and put on their desk or their refrigerator.

The ability to makes things happen is the result of knowing what you want and having the courage to go after it. For many of us, figuring out what we want is the hard part. I could give you the usual advice like “start with something you’re good at.” Instead, I’m going to suggest you ALLOW YOURSELF TO DREAM BIG! That’s another one for the fridge.

Early in my career, I wanted to be a sports photographer. While I could have gained experience shooting photographs at the local Little League games, I approached the Sports Editor of the biggest newspaper in San Antonio and asked if he’d give me press credentials to a Dallas Cowboys home game. Not only did he say yes, but he gave me a press pass for the entire season. Did that take courage on my part? You bet, but if I hadn’t asked, I would have been my own glass ceiling. By having the courage to dream big, and ask for what you want, you’ve eliminated most of your competition. Most people just talk about what they’re going to do “someday,” but few follow through.

While it’s great to dream big, don’t stop there. When you’ve figured out what you want to do, put together an organized, well-researched critical path that gets you from empty nest, or unhappily employed, to where you want to go. Maybe it starts with writing a business plan; acquiring new skills; working part-time in a boutique and culminates with opening your own boutique. While there will always be naysayers, if you believe in your idea, find qualified people/woman in that field and seek their advice. Don’t be afraid or embarrassed. More than likely, they’ve been in your shoes, plus people are flattered you think enough of them to ask their opinion.

As you’re honing your plan, don’t be discouraged if it doesn’t come together as you imagined or hoped it would. Things rarely do. If someone pokes holes in your plan, use it as an opportunity to do more research. They may have a valid point that will make your plan that much stronger.

One of my mantras is “Don’t take no for an answer.” “No” is just a word. It’s not a reflection of you or your abilities, and no today doesn’t mean no tomorrow. Don’t let a “no” keep you from moving forward. And finally, be relentless. Nothing is easy, but if you don’t like where you are in life, do something about it. Don’t wake up one day and regret the “what ifs” and “if only.”

WHO MAKES IT HAPPEN? WE MAKE IT HAPPEN.

10 Things That Scare Me More Than Aging