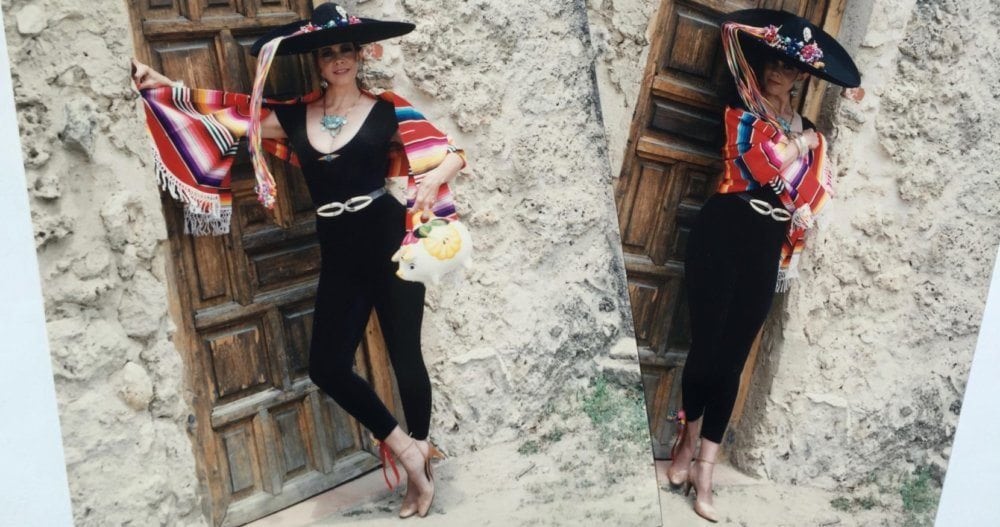 Every year my hometown of San Antonio throws a mean party. Fiesta is a 10-day celebration attended by 3.5 million people from around the world. Fiesta first began in the late 1800’s to honor the heroes of the Alamo and the Battle of San Jacinto. The entire city practically shuts down. Daily there are private and public events—fueled by music, margaritas and fajitas—including a day parade, a night parade and one that floats on barges down the San Antonio River. One of the most popular events is Cornyation, a bawdy spoof of Fiesta’s “royalty” that includes King Antonio, a Queen and her Court, all chosen from old San Antonio families. Tickets for Cornyation’s three-day, four-show event—downtown at the historic, 856-seat Empire Theatre—sell out in a few hours… faster than any other Fiesta event.

For almost 10 years, I was Mistress of Ceremonies of Cornyation which meant I was onstage, with a microphone, the entire show. Some years I also wrote the script.

Cornyation is attended by everyone from the Mayor, the Spurs, celebrities who happen to be in town, to anyone who loves a good time. Some years fans brought me roses and placed them on the edge of the stage. One year someone brought me a rhinestone tiara. I’ve been stopped in Barnes & Noble and restaurants around town and asked for my autograph. I thought they were joking, but they weren’t! At an art gallery cocktail reception someone introduced themselves and said they’d heard I was brought in from Los Angeles every year to do the show! Another person asked if I was the “Queen of Fiesta?” I had to laugh and say I was simply a performer (Drama scholarship to college) who loved being onstage and didn’t mind making a fool of myself.

In the beginning I pulled my own costumes together, like the one in the photographs. Here I wore a Mariachi sombrero I’d added ribbons and paper flowers to the brim; a serape I bought in college; a Danskin’s bodysuit; black velvet leggings, pinky/gold, Dior, snakeskin heels, and I carried a pottery piggy bank I bought at the Mexican market as my purse. I may have been campy, but I was always elegant.

As time went on, I had a woman make my costumes. I love hats, so one year she made me a gold crown studded with huge Swarovski crystals, interspersed with giant, red, crystal jalapeños! That was the year James and I started seeing one another, and I invited him to come backstage before the show.

Sometimes I shared a dressing room with “The Pointless Sisters,” an all male, gay group who were hysterical and had such creative costumes. When one of the six-foot “guys,” wearing eyelashes and falsies, poked his head in the dressing room and asked me, “Does the hunk out here with the cheekbones belong to you? You better come get him, honey, before someone else does,” I knew James had arrived.

While James was the antithesis of a prude, this West Texas boy, raised in the Church of Christ, looked like a deer caught in the headlights. I found him standing just inside the back stage door, his eyes the size of flour tortillas. Needless to say, that was the only time he came to Cornyation.

One of the great things about Fiesta is how everyone dresses up for the events. Hats are usually involved. 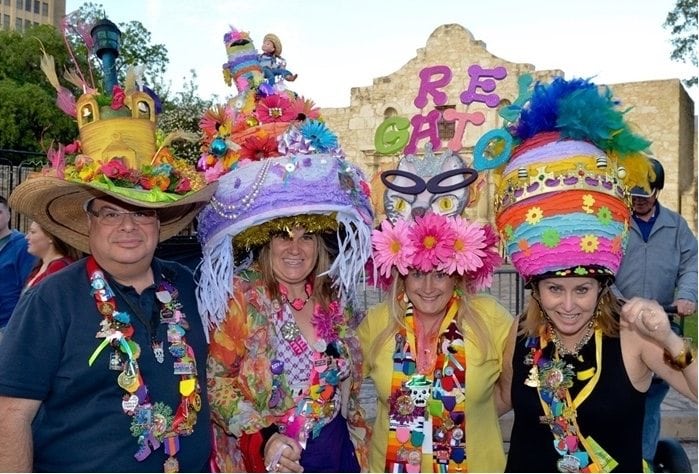 Photo from the Fiesta Association.

Here’s a photo of me and my girlfriend, Gayle, a few years ago at the Battle of Flowers Parade. It’s so hot we both had hats and umbrellas! I’m wearing my favorite all natural straw Patricia Underwood hat. I’d had that hat for years before this photo was taken and still have it. If you buy a well made hat (sorry, but they’re the most expensive) and take good care of it–hold it by the crown, not the brim, and store it upside down with the brim stuffed with paper–you’ll have it forever.

If you want to keep the sun off your face and neck, the bigger the brim the better! Baseball caps may be cute, but they don’t protect you from the sun. Many women think they don’t look good in hats but the trick is to pull them down low on your forehead. If you just plop a hat on the top of your head, you’ll look like a dunce! Look at the photo of me at the parade: You can tell my hat is low on my forehead because I had to tilt my head back so the camera could see my eyes. The same goes for the sombrero.

Whether it’s hot where you are or you want to make a fashion statement at your next festive event, here are some great summer hats! Never wear hats? Try my trick of pulling them down low on your forehead.