EVERY FAMILY HAS A BULLY 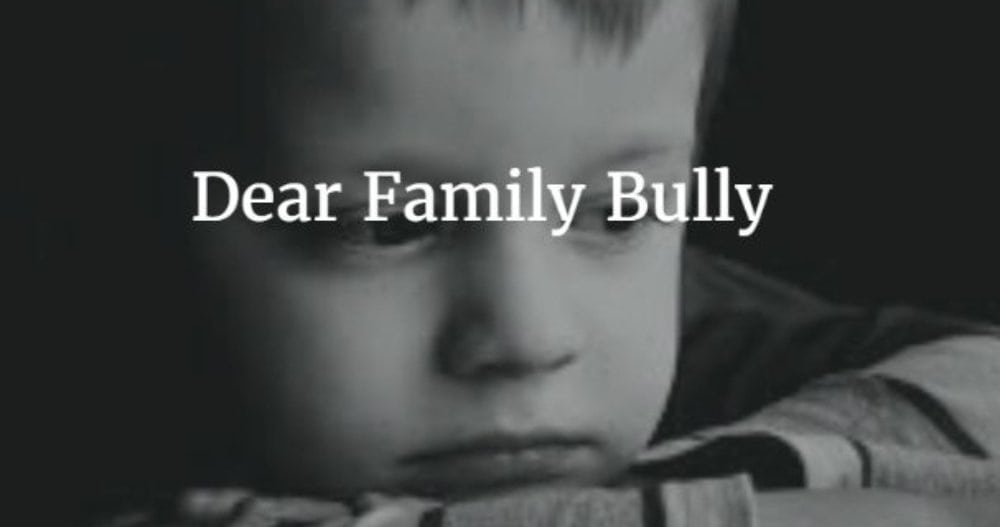 When a sudden storm descends it can unravel our lives in a blink. We’re forced to call upon an inner strength we didn’t know we had. If we’re lucky, we take shelter in the arms of family, friends, church and community. Often we’re forced to become our own strength. When James died unexpectedly that Christmas, his family wasn’t there for me, but then he’d predicted that.

Days after James’s died, the therapist who counseled me and one of his blood family said James was the glue that held the family together. James embodied God, country, family and fairness. Friends, family, even ex-family valued and relied on his strength, compassion and logic.

Later the therapist told me, “I don’t know about you, but I know crazy when I see it,” referring to the family member–the bully–who’d lunged at me in the therapist’s office, veins bulging, inches from my face and in essence threatened me. The therapist believed that since the rest of James’s family had no backbone, the bully would quickly move the troops into line.

Beginning with planning James’s memorial service, without consulting me, the bully ordered there would be no music, and no friends and/or family would speak at the service. Like a waddle of baby ducklings, the family followed the bully into the church—without me—and sat on the wrong side of the church. When it came time to stand in the receiving line and greet those who’d come to pay their respects, James’s blood family stood to the side with the bully. More’s the pity because they missed three hours of stories about James’s kindness and humor and statements of admiration and love. While it was the family’s loss, it was mine as well. They left me to stand in the receiving line by myself, and that was lost on no one.

James and I used to say, “Our kingdom to be a fly on the wall in that house.” They were odd, but they were the family I’d known and in some cases, loved for 16 years. Many never bothered to get to know me past a cursory level but came year after year to Christmas dinner and never said please or thank you, or let us help you clean up the table.

The same family that the day before he died, James had finally had enough of and vowed we would never spend another Christmas with any of them, and so it was.

Since then I’ve wondered if they fell into line like good little soldiers, afraid of setting off the bully. Countless times I remember one of them warning James, “I wouldn’t say that if I were you. You know how [the bully] is.” Did they even question or wonder why I’d been kicked to the curb? Did they ever stop to consider that as result, I lost my entire family that day? How hurt and alone I was, or how many months and years I cried and grieved for more than just James? Not even a “how are you doing” call. Nothing.

I know and the bully knows why. More importantly, God knows. The bully banned all contact with me so there would be no chance the bully might learn how devastated James was–to his core–about the bully who, also couldn’t face the thought of contributing to James’s death.

Do you have a bully in your family? Have you ever thought that by enabling them, you’re also complicit in their far-reaching destructive behavior? At what point do you stand up to a bully and say, “Enough?” I hope you never know the pain of such a sudden storm.

I Got No Time for Fancy Watches