Whose Bed Are You Sleeping In? 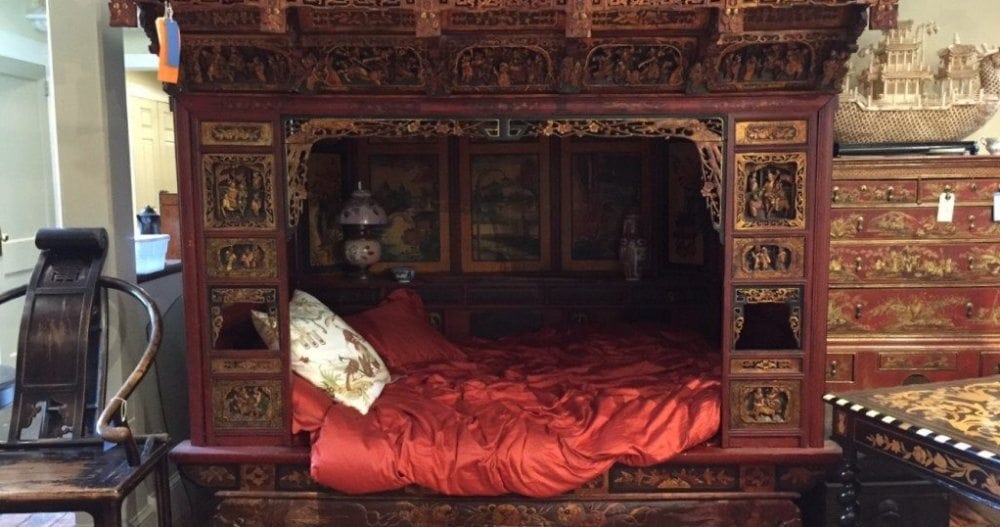 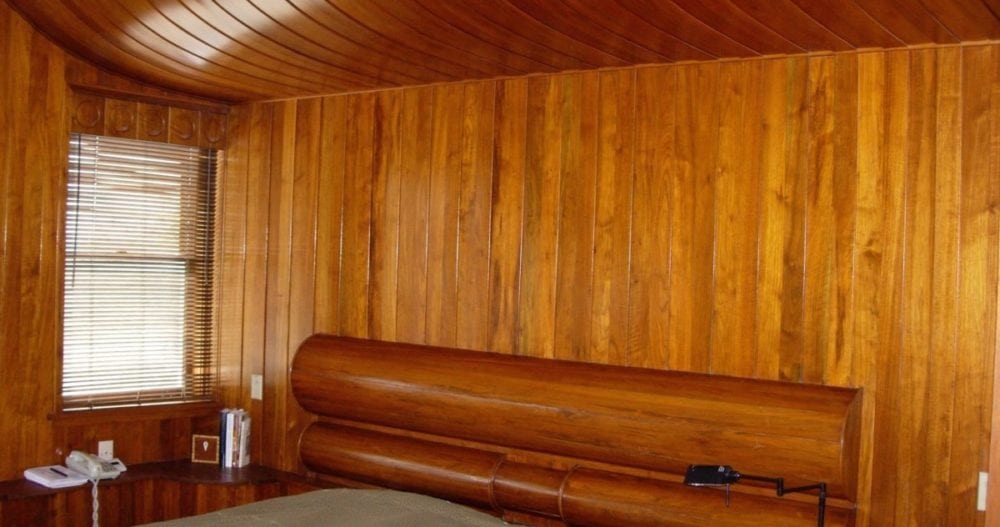 The only photo not in storage... 35mm. Wish you could see the entire room!

You’ve heard of statement necklaces? I lived in a house with a statement bedroom that was way ahead of its time. The bedroom was one of the first things you saw when you walked through the front door, and people were drawn to it like a magnet. The kingsize bed and its rolled headboard, curved overhead canopy and bedside compartments were made entirely from Honduran mahogany and were built into the house. While most bedrooms are intimate and private, this one was so big and on display, it was often the center of the house.

If that bedroom could’ve talked, I imagine its racy stories would have surpassed Fifty Shades of Grey.

Perhaps that’s because the house was once a gambling casino and a house of prostitution, then spy headquarters for Nazi sympathizers during World War II. Unusual people and things happened in that bedroom. I’ll tell you a few…

A psychic insisted on giving me a reading in that bed, and one of the San Antonio Spurs used to come and sit on the sofa in front of the bedroom window and watch the world go by while he waited for the dealership to repair his car. I arranged a hostile takeover of a public company from my bed, and friends would come on New Year’s Eve to watch fireworks from my bed and the sofa. Once I had a dinner party for eight there. The dining table replaced the sofa, and the house was lit only by candles. It was so fun and different.

The house I’m renting now has a modest master bedroom, and I doubt there have been many parties in there. Since this isn’t my forever home, I’ve started thinking about the bedroom in the new house I want to build. I’ve always been intrigued by antique Chinese bed chambers. They were small master suites unto themselves, and like my bedroom at the spy house, I can’t help but wonder what happened there?

Some Chinese bed chambers had a separate alcove furnished with a table and two chairs. Wealthy men were served tea, wine and food, by servants whose job it was to be invisible. Intricate, carved wooden panels were lacquered or inlaid with mother-of-pearl, and openings were draped with silk that could be closed for privacy. The rear of the bed chamber was for sleeping and lovemaking.

In ancient China it was common for wealthy men to have several concubines who took care of their every sexual need, while Chinese Emperors had thousands of concubines. A few, who were skilled at kinky sex, were given the status of pseudo-wives, while others were nothing more than poorly treated prostitutes. Some were murdered by their master’s wife. Others were buried alive to keep their departed master company in the afterlife. What do you want to bet the wife had something to do with that?

While I’m fascinated by Chinese bedchambers, it’s hard for me to think about owning and sleeping in one. This may surprise you, but I’ve decided there’s something creepy about sleeping in a bed with that much… history. I know, from experience, rooms and beds have positive and negative energy that can be picked up as easily as walking in the room. The spy house was one of those places. Over the years, there were people who couldn’t enter my bedroom, or my bathroom, because they picked up on something that scared them. I know… Once upon a time it scared me as well.

How Do Your Clothes Make You Feel?

Repurposing Your Silver Pieces in the Bathroom