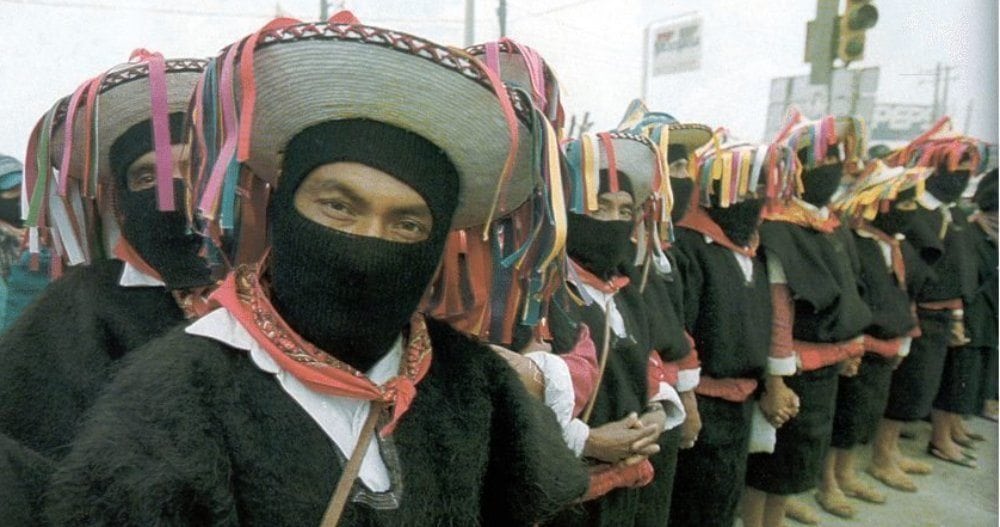 If we’d known about the violent conflict between the Lacandón Indians and the Mexican Army, we wouldn’t have driven into the beginning of a full-blown war. A time that later would be known as the Zapatista Uprising.

Many areas of Mexico are like opening a door to a dark basement. You don’t know what’s at the bottom of the stairs, but the hair on the back of your neck stands up. That was Chiapas in 1985.

San Cristóbal de las Casas, a Spanish colonial town in Chiapas, the southern most state in Mexico, was a contrast in cultures. Narrow cobblestone streets made way for donkeys pulling wagons with wooden wheels. Indian men with grim Mayan faces and straight black hair wore white dresses with red embroidery and paper-thin sandals. Some had rifles slung over their shoulders. Others wore black masks that revealed only their eyes. Members of the Mexican Army had automatic weapons and stood on random street corners. Tension and bad juju was as thick as the damp mountain fog.

After witnessing an armed confrontation at Palenque’s ‘Temple of the Inscriptions’ and a night in San Cristóbal, punctuated by gunfire, my husband and our friend and I abandoned any thoughts of searching for undiscovered Mayan treasure. Instead we headed for Oaxaca.

For nine hours we navigated a one lane, twisty mountain road—most of it in the dark—as gunfire erupted all around us. The drive was slow. Tedious. Nerve-wracking. Oncoming trucks—most without headlights, some full of soldiers—forced us to backup; once for nearly a mile, until the road was wide enough for them to pass us. Our drive was made even more urgent by the fires the Army had set up and down the mountainside and by the fact that we couldn’t turn around.

Often we saw fires, zigzagging below us. With each passing mile, it became more doubtful whether we’d make it to the next switchback before the fire jumped the road and engulfed the rest of the mountainside. All the while we heard gunfire and wondered if we’d be shot, or if our car would explode in the flames.

When we were out of the mountains the road leveled out, and the fires became a smoky orange glow behind us. Exhausted and shell-shocked, we stopped at the first sign of civilization. It was little more than a wide spot in the road. There was one store which only sold blue agave tequila. Fifty cents a bottle. We stood outside and passed the bottle between us; a swig or two, then more to quiet our nerves and wash down the taste of burning trees.

Behind the liquor store was a four-room, cinderblock hospedaje with a small courtyard in the center, big enough for one car. Three of the rooms were occupied, so we took the last shoebox-sized room with two cots and an open toilet atop a concrete platform. A wedding party mingled in the street outside, and we learned the bride and groom—and 10 relatives—were staying in the other three tiny rooms.

With illumination from a dim street light, kids played makeshift basketball. Some men motioned us toward a cinderblock building they called the “disco.” We weren’t sure if it was part of the wedding or a Christmas Eve celebration, but we accepted, hoping to find something to eat.

Inside couples were dancing to “Everybody Was Kung Fu Fighting.” The music blared from a funnel-shaped speaker attached to a pole in the middle of the room. I tried not to laugh, but the tequila had made itself at home in my empty stomach, and the events of the day had taken on a surreal quality. A forward young man asked my husband if he could dance with me. In a matter of seconds, a line formed. Young men, old men, even small boys, queued up to dance with me.

Within minutes, the man from the hospedaje appeared and insisted we return to our room where we—and our rental car—were locked inside the small courtyard. Once inside our room, no bigger than a jail cell, a key turned in the lock on the other side of our door. My husband and our friend tried the doorknob, kicked at the door and called out, to no avail. It was after midnight, and there was nothing we could do but give in to exhaustion and tequila.

Daylight arrived like something out of an episode of MASH. A loudspeaker outside played a bugling trumpet, followed by a man reading a list of announcements for the day as roosters crowed nearby.

The door to our room was unlocked. We stepped outside and viewed our surroundings in the early morning light. Positioned behind low-hanging tree limbs, stone-faced soldiers were holding automatic weapons and smoking cigarettes. One of the soldiers was my young, would-be dance partner. Gone was his cordial demeanor from the night before. In it’s place were the eyes of a predator.

Without a word, we gathered our things and left some money on one of the cots. My dance partner stood on the side of the road and watched as we backed out of the courtyard and drove away. As quickly as the wide spot in the road had appeared, once again, it was enveloped by fog and smoke.

Dressing Up for New Year’s Eve

They Say Everyone Has A Story, Me Too…

SWIM TOWARD THE LIGHT