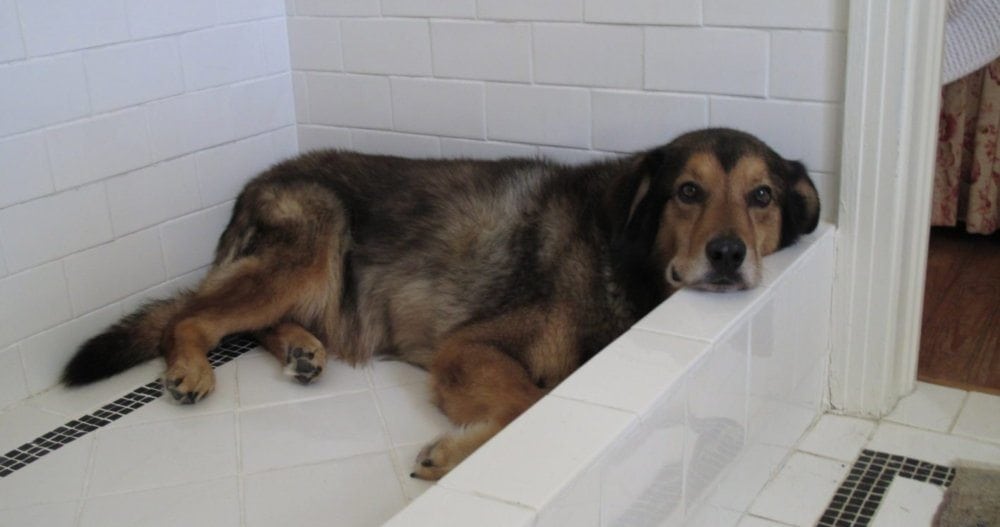 This was my little man, Sam. If you look closely, you can see fur peeking out from between his toes, a sure sign he was a house puppy, which was fine with me. Being an indoor dog made it easier for me to give him hugs, rub his soft silky ears and tell him how much he was loved and adored.

Sam captured our hearts the second we saw him. James said Sam was the only dog he knew who’d read and memorized the “Puppy Handbook.”

When James first found him on our property, Sam was emaciated and had a severe case of heart worms. Even so he smiled big, wagged his tail and pawed at the air as he danced around on his hind legs. The vet was amazed Sam had mustered that much energy because he wasn’t sure Sam would make it through the next few days, much less survive heart worm treatment. He was adamant, however, that Sam wouldn’t have survived another day or two without us. While both my dogs, Sam and Goldie, have gone to live with God, I’ve been thinking about the way they loved one another.

When we lived in the Little House at the ranch, there was a time when Goldie was restricted to the bathroom—the smallest room of our tiny 22 feet by 22 feet house—except when she went outside on a leash. Goldie had spinal stenosis, a type of arthritis that causes the joints in the vertebrae to swell and puts pressure on the spinal cord and nerves and causes acute pain.

The first week Goldie was confined to the bathroom, Sam kept pawing at the bathroom door. When I let him in to see her, he walked over to Goldie, leaned his head down until their noses touched and then placed his paw on top of hers. It was the sweetest thing. Goldie perked up and wagged her tail, and with that, Sam laid down in the shower and stayed there next to her until she was better.

We all value friendship and loyalty, but did you know love and friendship is one of the most important components of healing physically, emotionally and mentally? Like Sam, sometimes all you have to do is let your friend know you care. It’s a small gesture, but it means the world to the one in need.

Is there someone you should reach out to, someone who could benefit from knowing someone cares and thinks about them? So what if it’s “their turn” to call you? Send them an email or a Facebook message. Better yet, pick up the phone and call them.

…and thank you, God, for sending us Sam. He needed a good family, and we needed a great dog.

What Lurks In The Storage Unit?