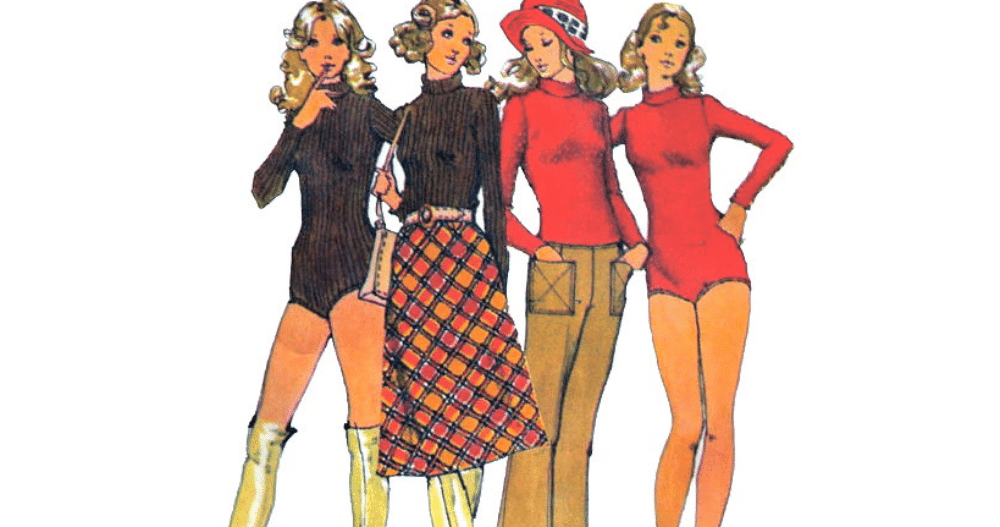 If you think thongs are uncomfortable and unsanitary, remember bodysuits? They’re back in style and the ultimate wedgie from stem to stern. In my 20’s, I owned a couple of bodysuits, but the snaps were soooo uncomfortable.

What sadist put those… there?

If we’re careful, most of us can get a couple of wearings out of a nice blouse before we dry-clean or launder it, but if it’s wedged along your vagina and tucked up next to your bare bum, how do you feel about wearing it again and again? I’ve seen a number of gorgeous bodysuits this season where the “panty” is done in a contrasting floral silk. They’re pretty, but only you can make the decision about the comfort and hygiene issues.

I prefer Danskin leotards over bodysuits. They give the same slim, pulled together look, but without the wedgie and painful snaps in the crotch. My favorite is Danskin’s long sleeve leotard. In my 20’s, I wore them with blue jeans, high heels and big, wild hair! Think Chaka Kahn wild hair! (See below.) In addition to black, Danskin sells leotards in a variety of colors, including this year’s popular dark plum. 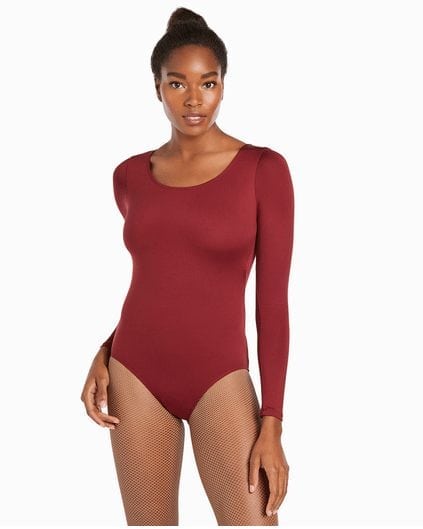 Bodysuits mean women are tucking their shirts in, again, which I like. If you’re self-conscious about your waistline or midriff, think Spanx. Believe it or not, a tucked in blouse is more slimming and less aging and frumpy than wearing something that’s not tailored and/or is too big for you.

As long as I’m venting about clothing styles, I’ll be happy when cropped pants have gone the way of the two-party phone line. Since cropped pants hit most of us at an unflattering place on the leg, there aren’t many women who look good in them unless you’re wearing shoes with an ankle strap or that lace up the leg, or you’re thin and have the right “torso to lower body” ratio. I don’t know if there’s a formula for that, but I know it when I see it.

I bought a cheap pair of Zara, pleated, navy with white polka dots, full-legged, silky, cropped pants. I knew I looked horrible in them before I bought them, but totally fell for the fabric and figured Annie and Lulu were the only ones who’d see me. Recently some girlfriends came for the weekend, and because the cropped pants looked SO AWFUL on me, my friend took a photo of me wearing them. I think she’s holding onto it, let’s not say for blackmail purposes, but “for when the time is right.”

These pants look much better in this online photo than they do on me!

Just in case you think I’m kidding about the big, wild hair… Here are a couple of photos of me, from 1982, interviewing crew members from an aircraft carrier in the Gulf of Mexico where, the next day, I experienced two cable arrested landings but only one catapult takeoff. On the first pass at landing on the carrier, the pilot crash “controlled crash” landed onto the deck, but missed the wire that was supposed to stop us! At an insane rate of speed we slid right off the edge of the aircraft carrier and dropped like a stone toward the ocean. They land full throttle–full speed–incase this happens. Woah! Not a peep or a gasp escaped my lips! At what seemed like the last second, he pulled up, came around, again, and hooked the wire. He was embarrassed, especially because he had a journalist in the backseat. 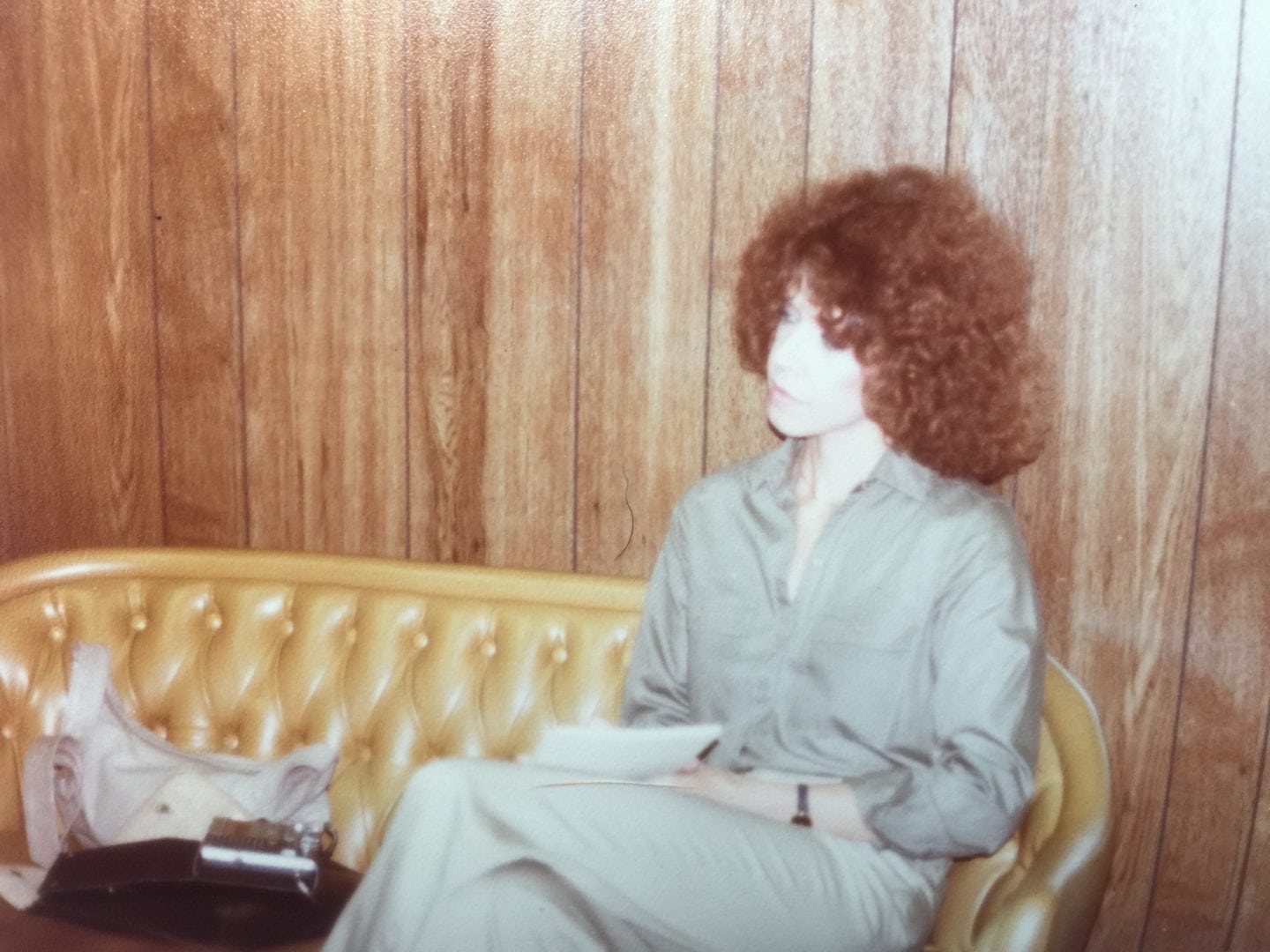 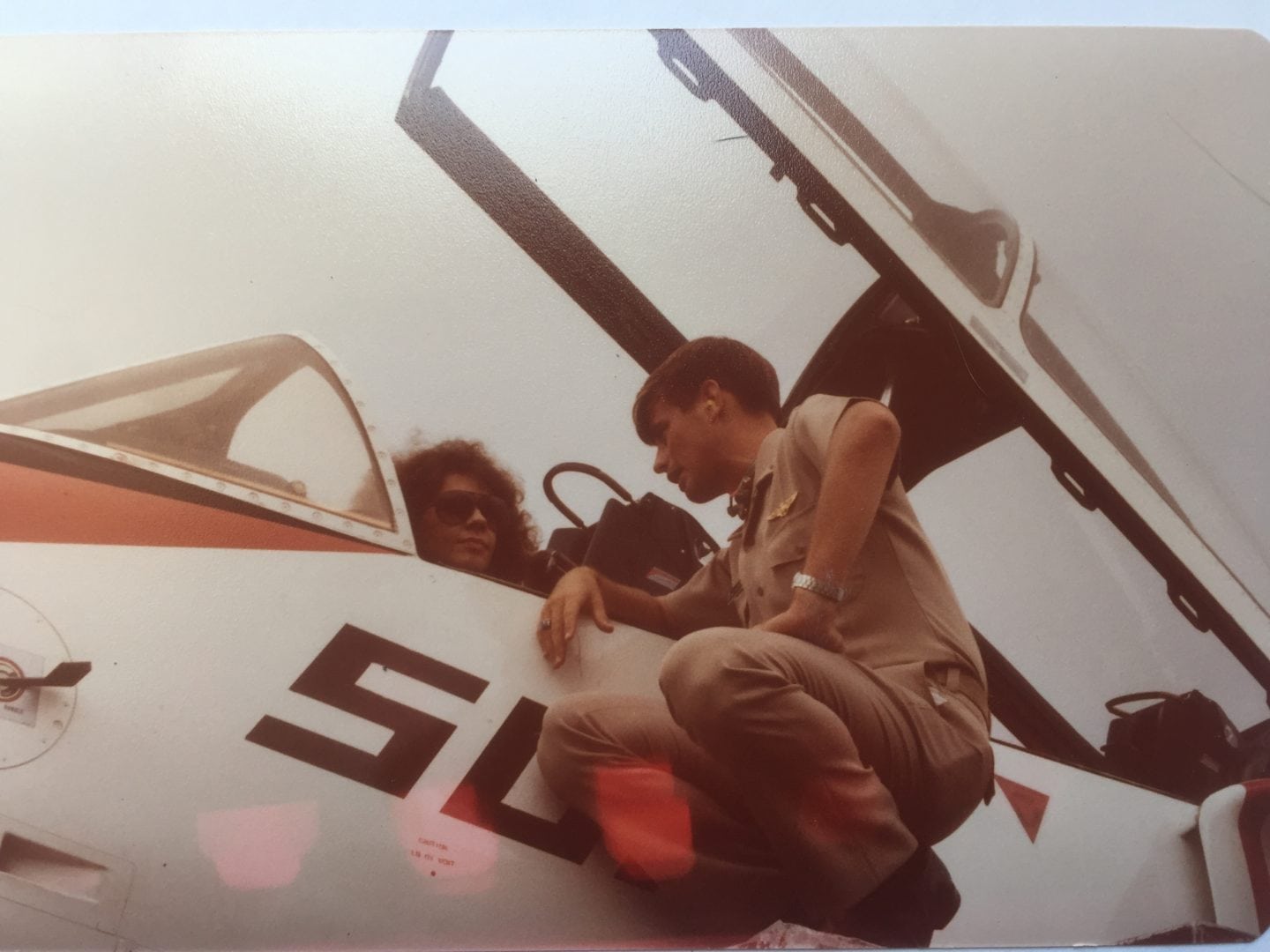 Getting familiar with my “ride.” You can’t tell from this photo, but he was dreamy! Men in uniform always look great, but I’m confident this guy would have looked better out of it… 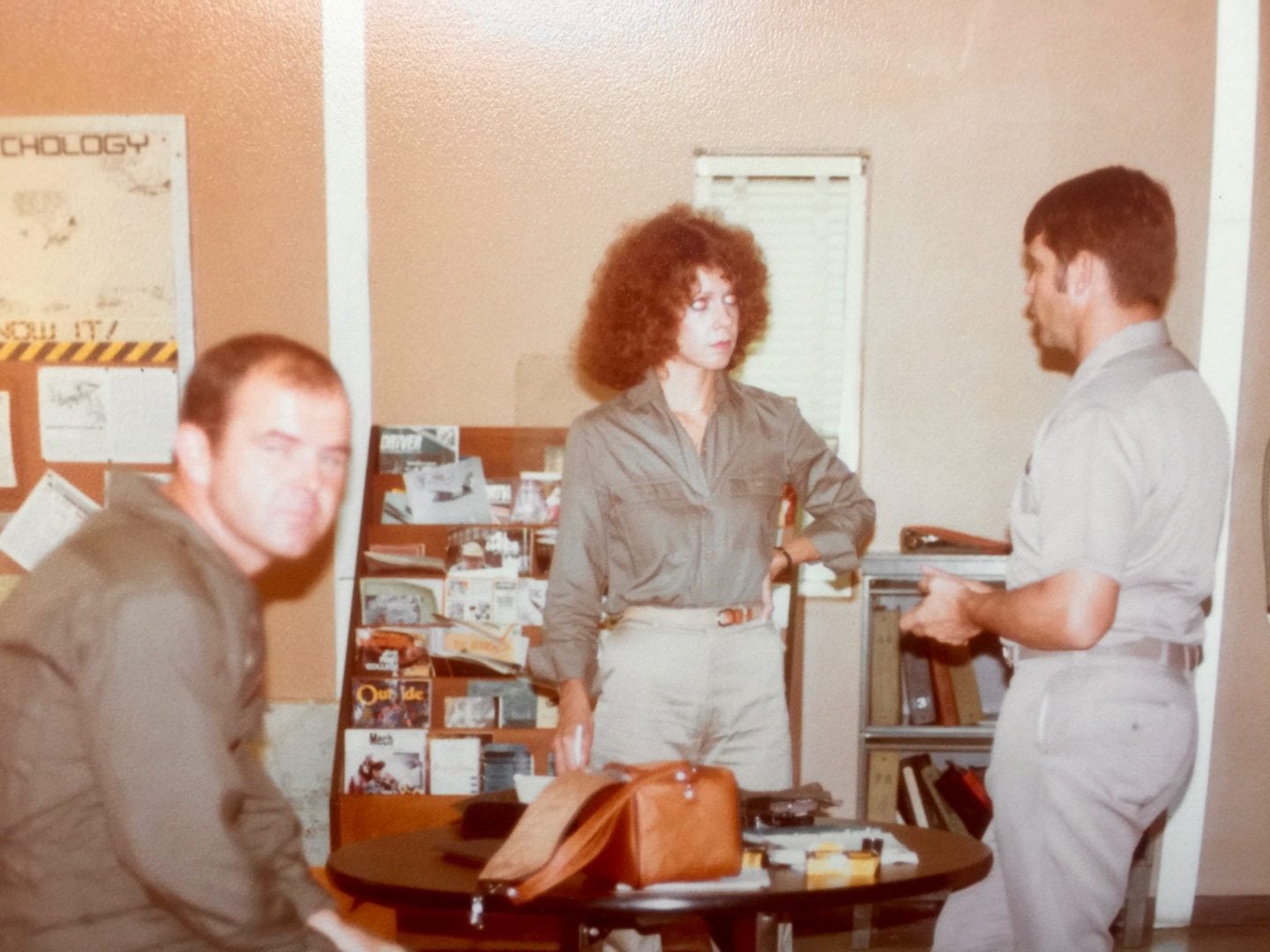 I pulled things from my wardrobe that would be as close to how the officers dressed as I could… olive and khaki. My clothes were Calvin Klein. Theirs were U.S. government issue.

TO FUR OR NOT TO FUR?