Music, The Fabric of My Life 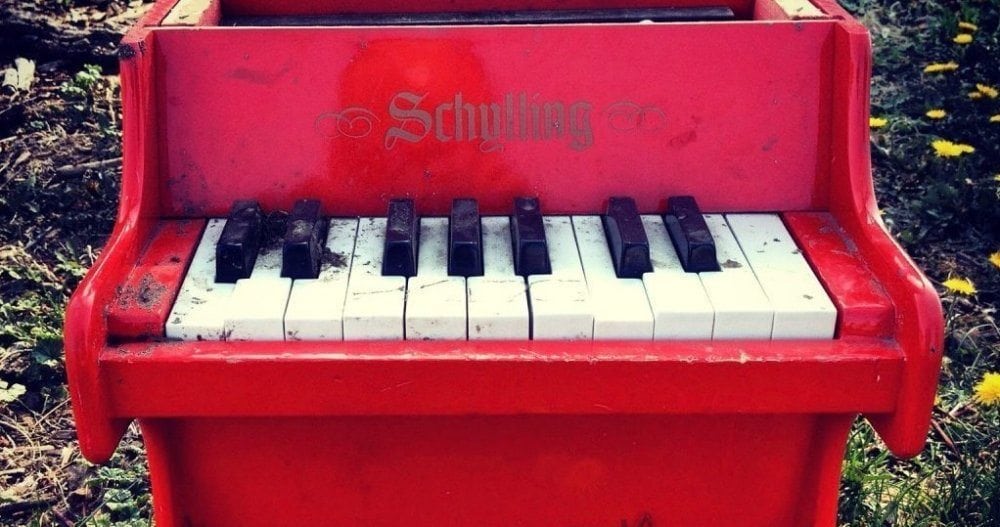 Twinkle, twinkle, little star. I sit on the floor, my tiny fingers plinking out notes on a plastic toy piano. Its tinny sound evokes thoughts of carnivals and calliopes, clowns and cotton candy. I can’t remember a time when music didn’t fill me with rhythm and wonder.

Music is like air and water, the most basic life-giving force. It’s my personal time machine that transports me back to forgotten memories. I climb inside…

My father’s playing the blues on his saxophone. I’m only five, but I know the music of John Coltrane, Charlie Parker and Dave Brubeck. My father’s eyes are closed, and he’s lost in his music; removed from the pressures of my mother, a mortgage and snow in the driveway that needs shoveling.

My musical time machine moves forward. I’ve abandoned my classical piano lessons and lost my heart to rock n’ roll. The Rolling Stones, Bob Dylan and The Band… They changed my life. My mother throws away their albums, but I buy another and another.

Ten years later Stevie and I are singing Carol King in our hotel room. But will you love me tomorrow? Just as the desert sun rises over the Vegas strip, room service delivers pancakes and juice. We decide there ought to be a law: You can’t see Las Vegas in the daylight. The boy sets the breakfast tray on the table, and we tip him with our best Mick Jagger imitation, pursing our lips and strutting our stuff to Honky Tonk Women. Yeah… Gimme the honky tonk blues.

We dress and go downstairs, winding our way through a maze of gaudy and garish lobbies where bored housewives pull one-armed bandits, hoping to win the big one or fall in love for the night. Memories to see them through a long winter of distant husbands, homemade Halloween costumes and Christmas with the in-laws.

Past the All You Can Eat Buffet, there’s a hooker singing off key in the Elvis Presley Wedding Chapel. Love Me Tender, Love Me True… She tells us her friend, Johnnie Girl, just married a trick from Duluth. Her blue mascara has settled in a smudge under her eyes all hard and jaded like. A sad little woman child who’s lost her way only she doesn’t know it yet.

Years later my musical time machine sets me on the steps of a black church. The congregation is clapping and throwing their heads back in jubilation. When Jesus Washed… My friend and I slide into the pew at the back of the church where his mother plays the organ. I imagine what they’re thinking: White folks don’t know gospel, don’t feel it oozing from the bottom of their feet, running into the dirt as it nourishes the earth and all God’s children. I smile and pay them no never mind and sing l’ll fly away.

In a little while my friend leans over and asks, “You ready to go yet, girl?”

I shake my head no. I’m the only white woman there, but I won’t embarrass him by swaying down the aisle behind the woman in the lavender dress.

This time he’s the only brother in a country dance hall. I’ve waited 20 years to hear Willie Nelson, and now I’m close enough to reach out and touch him. I look at Willie’s braids—bound by strips of red, white and blue cloth—and wonder if he smoked some good weed before he came onstage? The lady next to us is giving my friend the eye. Her hair is the same size as her posterior, and she asks him to two-step to Red-Headed Stranger.

The chords of my life are harmonious, yet dissimilar, cast like meteor showers from the Pleiades. The clouds are pulsating in the moonlight. I hear the Indian drums of Robbie Robertson’s Broken Arrow; the spirit of the Crow and the Cherokee, the Comanche and the Choctaw. I lean against the rock wall as the long shadows of the Madrone tree etches its way across my body. My arms beckon my lover toward me. There he goes, turning my whole world around.

Searching for a Complete Set of Silverware

THIS AND THAT AND A TUSCAN TEASE

It’s Not a Diet But a Lifestyle Change