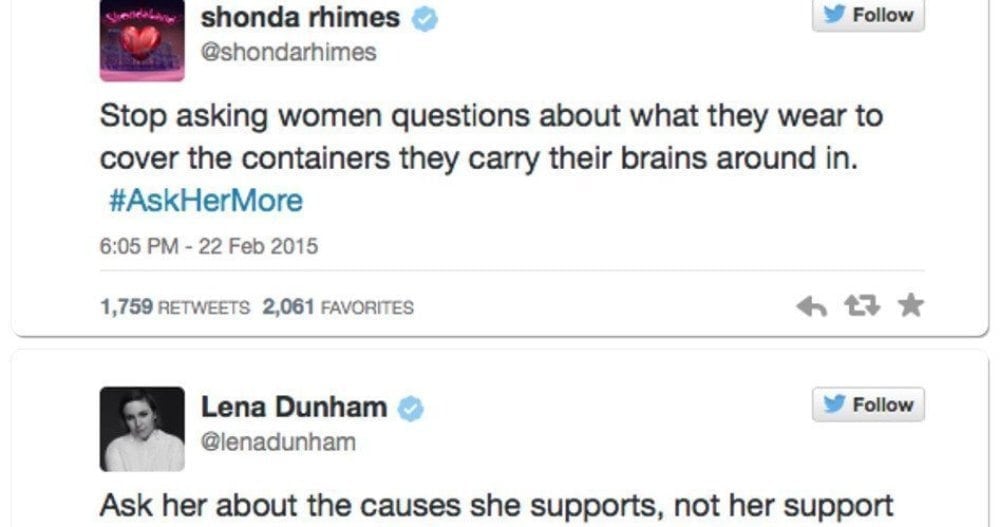 Anyone who watched the actors on the red carpet at this year’s Oscars was aware of the hashtag #AskHerMore. Reese Witherspoon championed the hashtag by saying, “We’re more than just our dresses. We are so happy to talk about the work we’ve done.”

WHILE IT’S FUN TO SEE OSCAR GLAM, THE MAJORITY OF THE “WHO ARE YOU WEARING” QUESTIONS HAVE COME FROM OTHER WOMEN.

On one hand, “we’ve come a long way baby,” but women’s rights and female equality are still an evolving process, even within our own community. If women are to succeed and thrive, we need to push through every impediment with the same support and confidence men have expressed since time began. Leaning in includes asking a woman where she bought those kick-ass shoes; listening and brainstorming career decisions; helping her gain access to positions of leadership and investing in her company. #ShowYourPower

When I did a hostile takeover of a public company, except for my attorney, I didn’t have a support system of any kind. I would have given anything for a smart, savvy girlfriend who understood the stakes. While I gained a seat on the board, replaced management, became managing consultant and co-signed every check that went out the door, for the next 14 years, board meetings were mandated cease fires. Literally and figuratively, I sat alone on one side of the cease fire line. The president and the all-male board sat together on the other side. There was an unspoken undercurrent of hatred toward me. I understand. I publicly humiliated some of them. In the board meetings—and elsewhere, I’m sure—they called me a liar, but we all knew they were the liars.

If I had it to do over again, I’d have chosen the same paths. On the plus side, I learned a lot and gained valuable knowledge and confidence. #FindYourVoice

There are some things, however, I would do differently. I would fight harder to be #PaidLikeMen I wouldn’t have spent so long wearing power suits, carrying a briefcase and overthinking my words. #BeYourself I would have gone into the CEO’s office, years earlier than I did, and called him on his alcoholism. #SpeakWithHonesty

Today I read a quote about board diversification from a CEO of a well-known company: “While we don’t have an open slot for a director, the company is more than willing to consider female candidates for the board and would be anxious to find one that fit in.” Hmm… History makes me skeptical. I can only imagine their definition of “fit in.”

Over 30 percent of U.S. companies still don’t have a woman on their board. The average corporate board has nine members. In addition to leaning in and admiring her shoes, #ShowYourPower so we can enable every woman we know to reach higher and achieve more than she imagined.