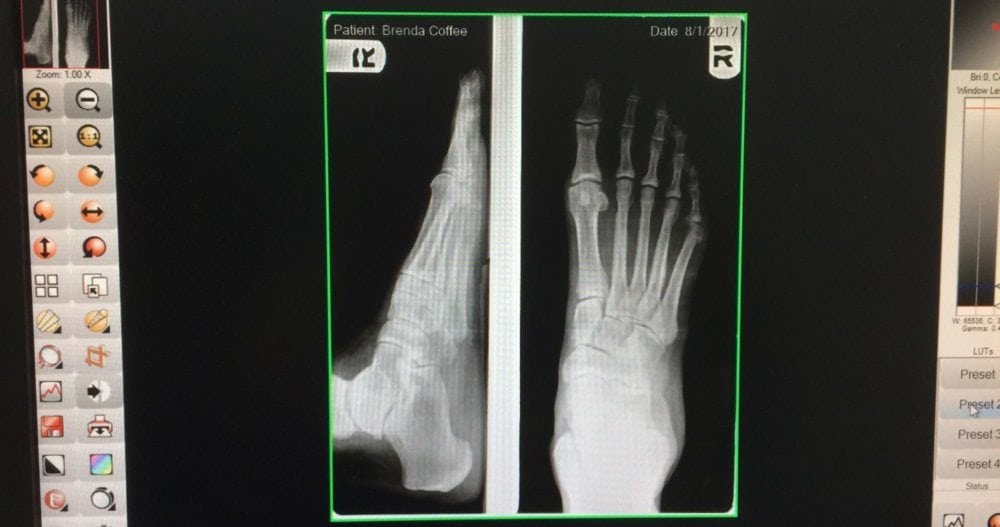 The podiatrist says age and gravity are having their way with my feet. The toes on my right foot have begun to curve backward toward the sole of my foot—hammertoes—so the end of my poor middle toe is bearing the weight when I walk. As a result I’ve developed a callus on the bottom of that toe, which I tried to trim, but it only made matters worse. When I asked the doctor what the little dot in the center is—thinking it’s a “core” of some sort, like with a corn—he said it’s my bone.

When I was in elementary school the neighbor lady thought my toes were long enough to be fingers and frequently said my feet were beautiful and graceful. Each time my mother corrected her and said, “No, they’re just expensive.”

My feet are crazy skinny! I wear a size 9.5 with a 6A heel. There are only a couple of brands that make shoes that narrow, and they’re Italian and expensive. No cute, trendy shoes for me and shoes on sale? It’s easier to find an albino, baby elephant than a pair of shoes narrow enough so I don’t walk right out of them.

James had skinny feet as well. He once said if we’d had children, they would have had ice skate blades for feet. He told me about a woman, we both knew, who was vain about her feet. She thought they were pretty. I’ve seen her feet. I’m not sure whose feet she was comparing them to, but the only women of a certain age I’ve seen with really pretty feet are foot models.

Did you know the most sought after foot models need to have more than pretty feet? Their feet need to be able to “flirt” with the camera, as in… They need to look like “they’ve just been tickled, or they’re excited.” In other words, their feet need to imagine someone or something—other than age and gravity—is having their way with them. Those are some talented feet, which reminds me…

In my 20’s, I had a friend who was a madam. Yes, I know you’re wondering how we met, but that’s another blog… or two. She was one of the smartest, most well-read people I’ve known, not to mention a natural blonde beauty who was also cross-eyed. It made for an irresistible combination for politicians, celebrities and wealthy men. You think I have good stories? You should have heard hers.

Sometimes my first husband and I would meet her and her husband somewhere fun and catchup. One year they met us at the Ocean Club on Paradise Island. While the guys went off to rent motors scooters, she and I sat by the pool while she told me stories about her clients.

One well-known guy paid her $500 every time she unzipped her boots and took them off and another $500 every time she put them back on and zipped them back up. He never touched her. Now she had expensive feet. She also had an artful way with words, so much so that all the waiters were hiding in the bougainvillea behind us, hanging on her every word. No wonder our Piña Colada’s were slow in coming…

PACKING FOR SEPTEMBER IN ITALY

Sleep Masks, Sam and the Gecko