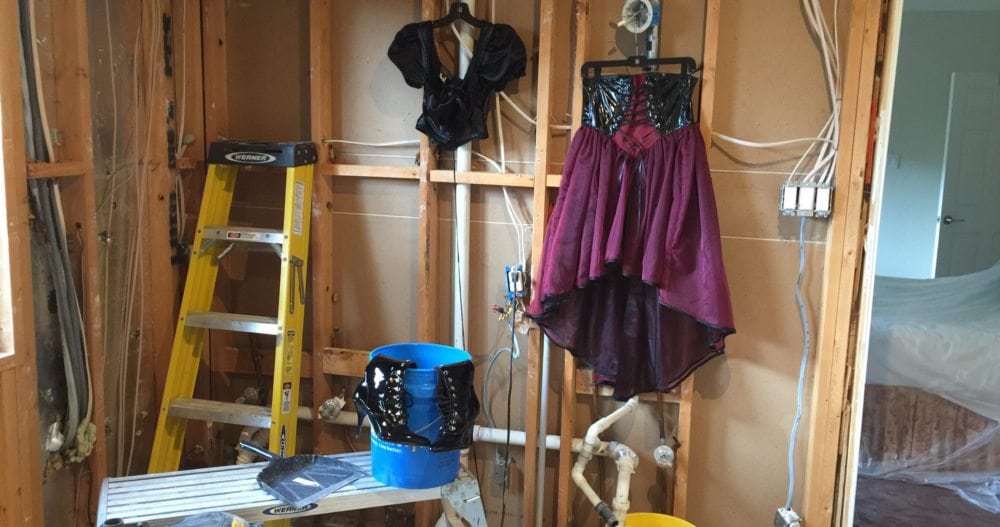 They used to call me Snow White, but I've drifted... Photographed in my bathroom that's been gutted. 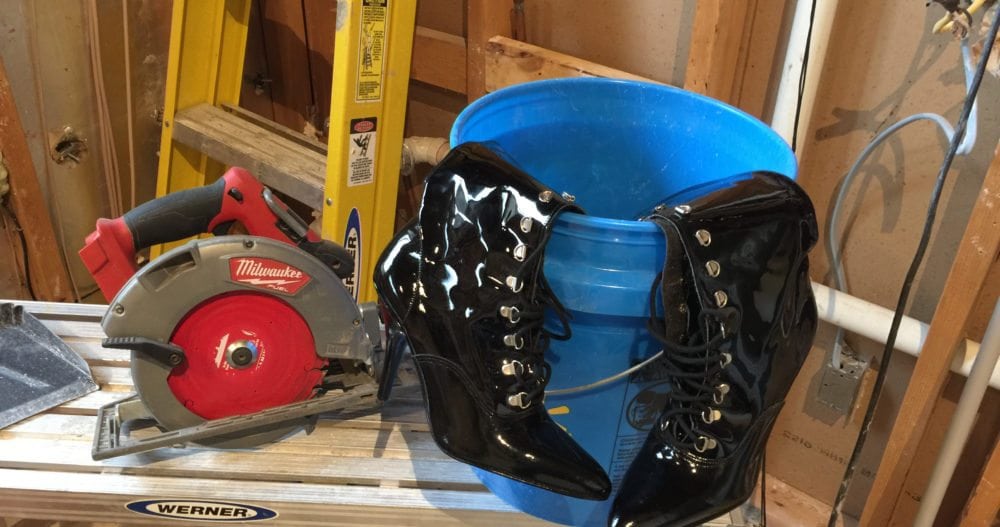 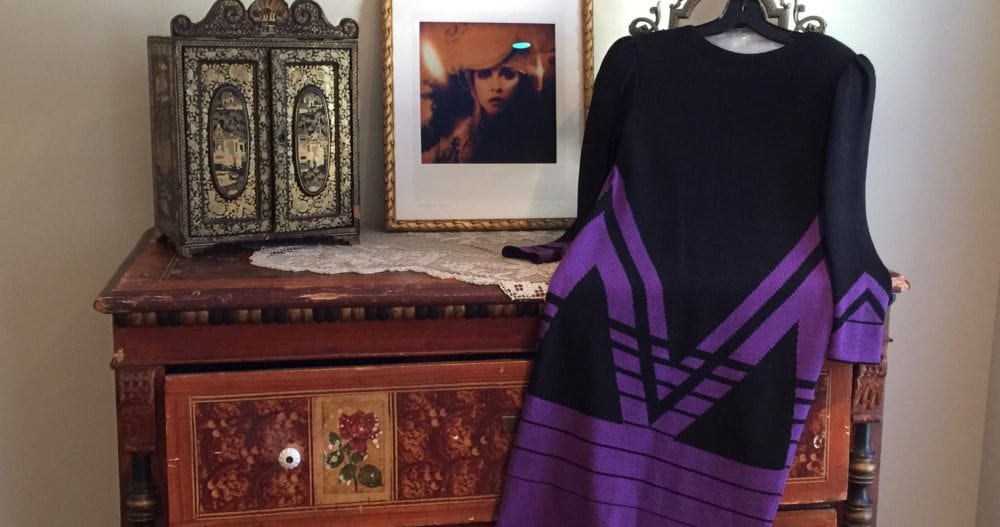 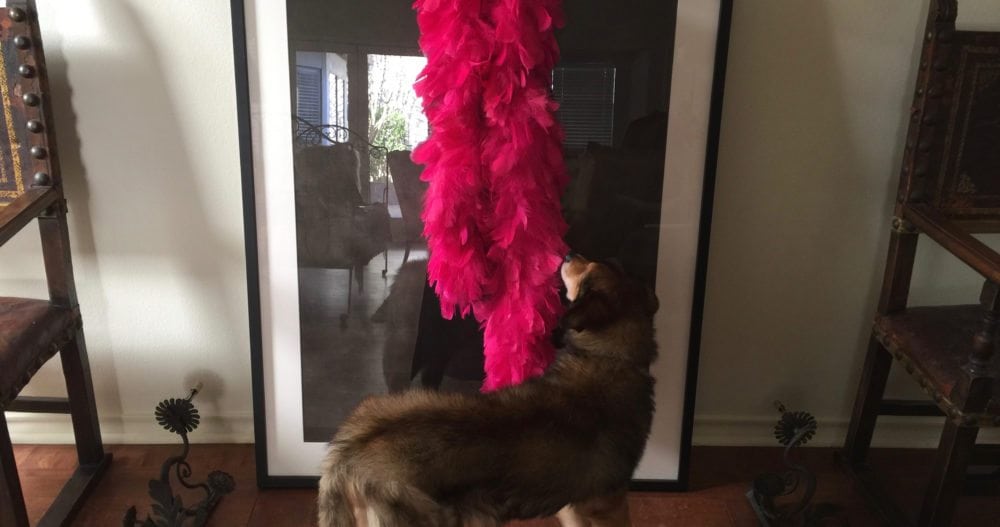 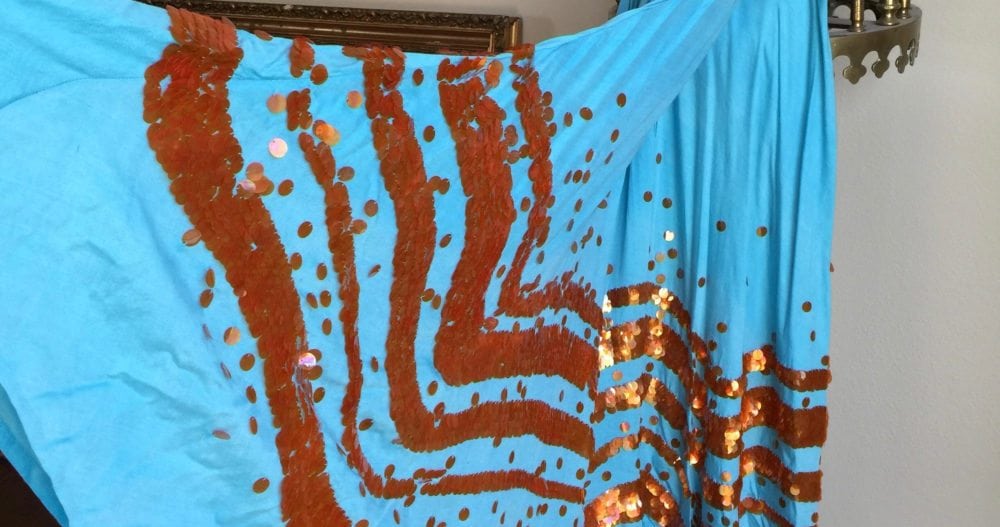 Today I unpacked seven, cardboard wardrobe boxes that have been in storage for 10 years. I just thought it would be an easy process, and I’d move on to the other 44 unpacked boxes. Instead, I tried on old clothes of mine, mother’s, James’s… even my first husband’s, while Sam and Molly watched and sniffed with great interest. So many memories…

Mark Twain said, “Clothes make the man. Naked people have little or no influence on society.” I wonder what he would say about my Snow White “gone bad” outfit?

In one of the boxes was my first husband’s slim-fitting, soft, black leather jacket. I remember we walked into a store on Rodeo Drive in Beverly Hills. His blond hair hit his shoulders, and he was wearing his tailored jacket and thin-soled Bally shoes. I had lots of hair, as was the style, and was wearing high heels and a black, Calvin Klein, thin wale, corduroy jumpsuit with a fitted waist—collar turned up—like Lauren Hutton wore in that month’s issue of “Vogue.” As someone told us that day, “You look like movie stars.” I was 23.

In another cardboard box I pulled out the black and purple Adolfo knit I wore to a wedding soon after my first husband died. I remember standing on the balcony of an historic, Texas limestone hotel, sharing a joint with my friends and thinking I was having too much fun for a new widow. It had been a year-and-a-half of his surgeries and chemo, bone marrow pulls and experimental treatments and before that… seven years of his multiple, substance abuse problems. I was more than ready to feel what it was like to be out from under the fear of living with a Dr. Jeckll and Mr. Hyde, drug-induced personality. I wanted to know what happy felt like, again. I was 37.

Then there’s the Snow White “gone bad” stage costume (… another story) I bought at a San Francisco S&M bondage store. This may be my favorite shopping experience. As if on cue, two strangers and I would exit our dressing rooms in unison, stand side-by-side–seemingly unaware of the person next to us–and look at ourselves in the store’s only mirror. My fellow shoppers included a bare-chested, well-built guy in biker boots, who was trying on silver chainmail jockstraps. Lots of adjusting going on there:) The other shopper was a tall, way-y-y-y overweight redhead whose outfits got smaller and smaller as her tiny man clapped louder and louder. And then there was me, dressed in lace-up, black patent leather stiletto boots, an off the shoulder black satin and patent leather lace-up top and a multilayered, plum colored skirt, shorter in front than in back. My kingdom for a video camera that day! I was 44.

I also found mother’s detachable fur collar and cuffs she added to sweaters and jackets and a voluminous blue skirt with giant, copper colored sequins–price tag’s still on it–I bought after I finished chemo for breast cancer. The skirt was an affirmation I’d still be here the following year and have someplace festive to wear it. That was 12 years ago, and I’ve never worn it.

On this Thanksgiving weekend, I hope each one of you know how much I value and appreciate your support and friendship; that you take the time to visit 1010ParkPlace and read not just my blog, but all of our great writers. Here’s wishing you a safe and joy-filled weekend.

Would You Scream Obscenities At Her?

DO YOU STRUGGLE WITH HOW YOU LOOK?