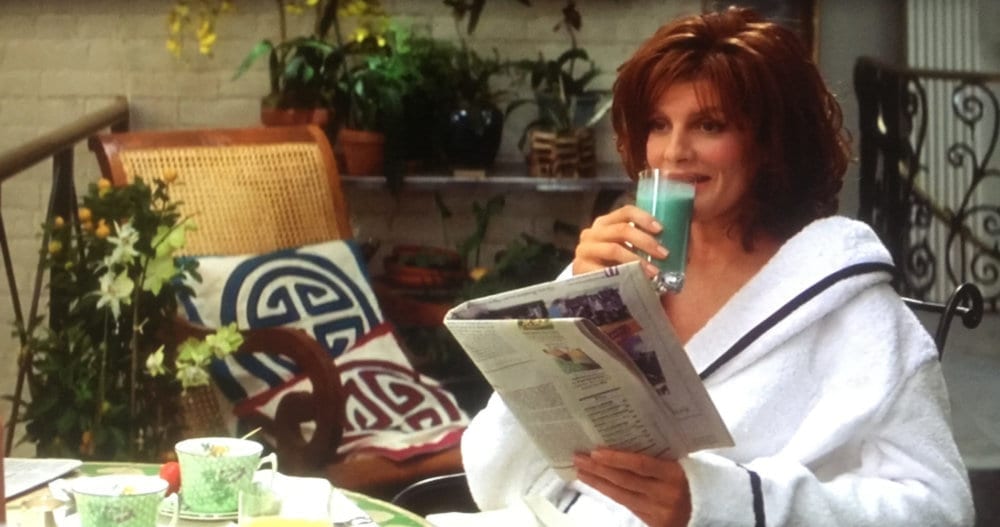 Remember Rene Russo’s Italian Riviera colored smoothie in the Thomas Crown Affair? The enticing blue-green concoction that made many of us decide—then and there—that we wanted whatever she’s having? While I began drinking green smoothies, I must have used the wrong recipe.

Instead of having a man on my arm like Pierce Brosnan, I wound up with kidney stones.

A couple of years ago I switched from my usual breakfast of Shredded Wheat or Grape Nuts, with almond milk, no sugar, to a slice of Whole Foods’s cranberry walnut bread with almond butter—no added sugar or salt—plus a smoothie made with almond milk, Amazing Grass’s plant based protein powder, a banana, blackberries, strawberries and copious amounts of spinach or kale. It was filling and carried me through the morning and sometimes into the late afternoon.

Everything was great until what felt like lightening passed through my midriff in the middle of the night. I bolted upright—out of a deep sleep—and screamed. It was one of the worst pains I’ve ever experienced. The first thing that came to mind was when my oncologist said I didn’t need to come back every six months for a checkup.

“If your cancer recurs,” he said. “You’ll find it before I do. It will be a sharp pain that wakes you in the middle of the night.”

Once I began thinking about his comment, I couldn’t go back to sleep. Since I carry one of the BRCA breast cancer genes, breast cancer can recur in my pancreas, and at 1:40 am I realized the pancreas was somewhere in the vicinity of my excruciating pain. For the next four hours I laid there and replayed this information and wondered if my breast cancer had metastasized, and how would I get through it without someone here to lean on?

When morning came I called my doctor who scheduled a number of tests, that day, including a urinalysis and an ultrasound. Thank you, God! It was only kidney stones!

Who knew spinach and kale caused kidney stones in some people, even young, healthy females? Dark green leafy vegetables—like spinach and kale—are oxalate-rich foods and can bind together with calcium and crystallize. Coincidently I’d upped my daily dose of calcium. These crystals can build up into hard little masses in the kidney and get stuck there… or elsewhere in the urinary tract… until you “pass them,” which means they exit in your urine. The pain I felt that night was one of those little suckers exiting my kidney.

Since then I’ve had another kidney stone, but I’ve learned they can be prevented by making modest changes in my diet. I’ve stopped eating kale, spinach and “brown things” like coffee, tea, colas and chocolate… Chocolate’s the only brown thing I eat. I’m also drinking more water.

So while I don’t see a Pierce Brosnan in my future—there aren’t many of those out there anyway—I’m still drinking smoothies every morning, just not with kale or spinach.

THE T-SHIRT TO PROVE IT