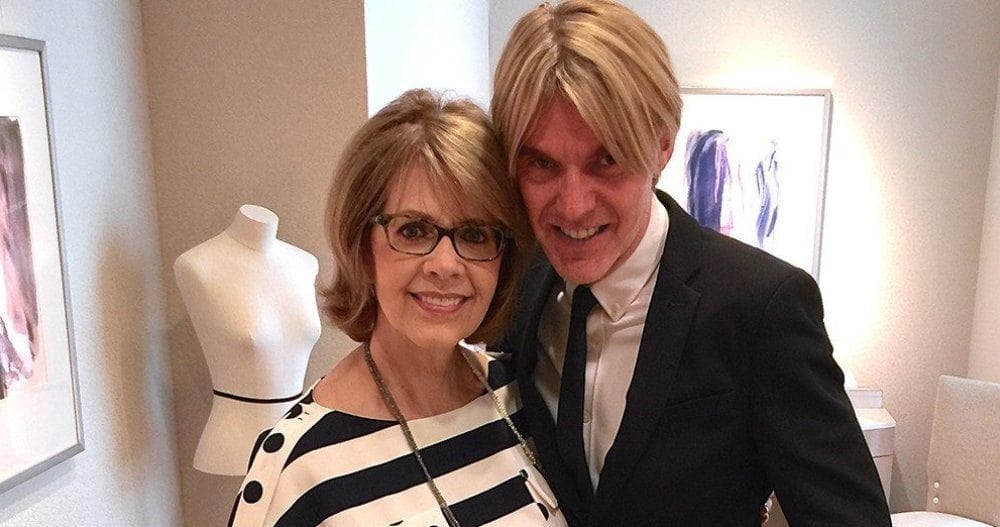 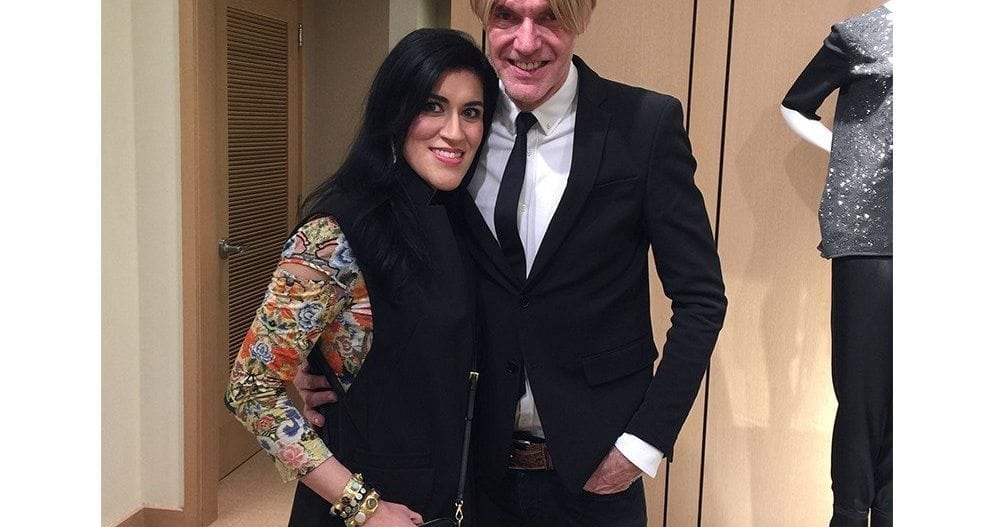 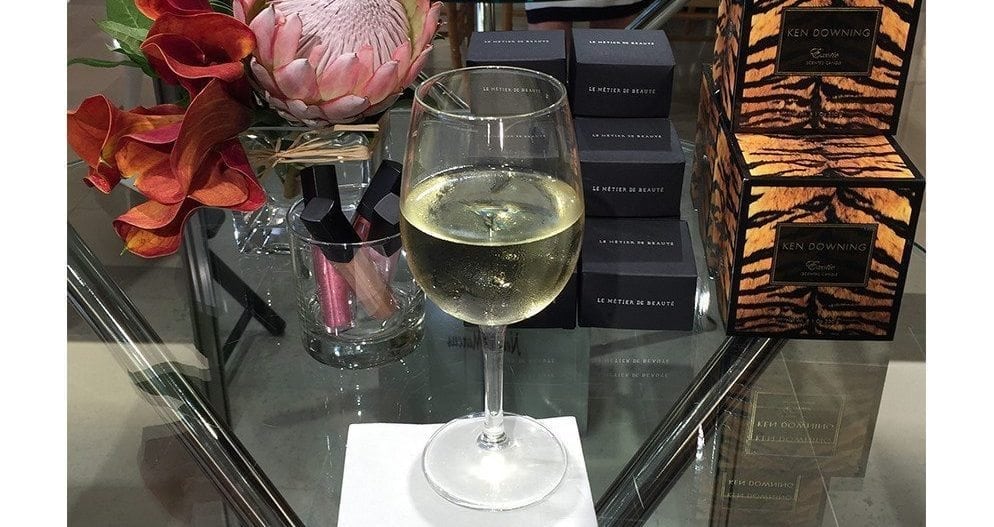 “More is more and less is a Bore.” 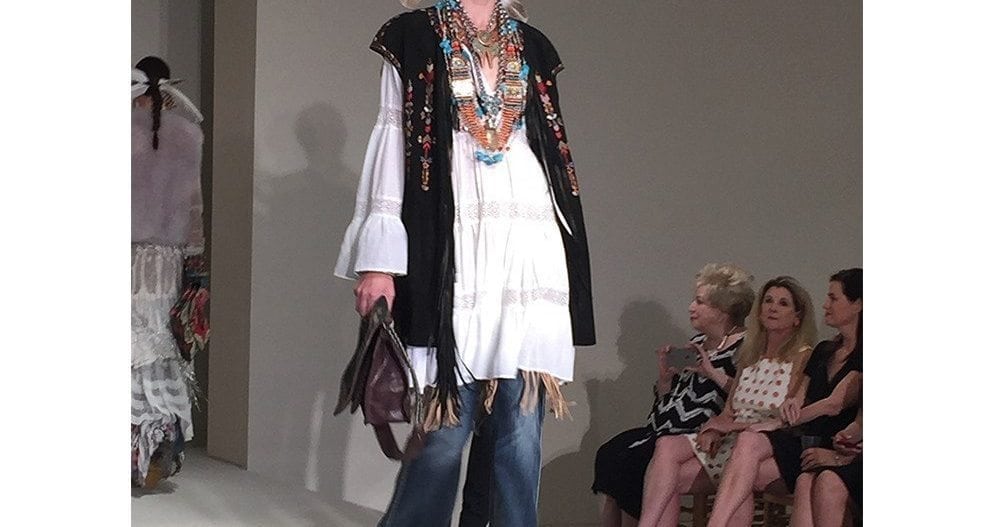 “It’s back to the 70’s with Bohemian chic, antique lace and turquoise and coral jewelry.” 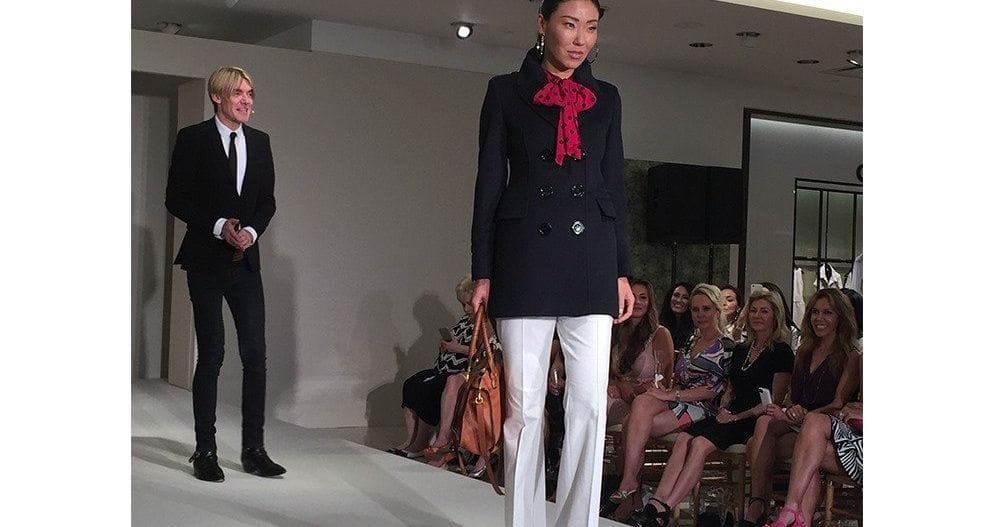 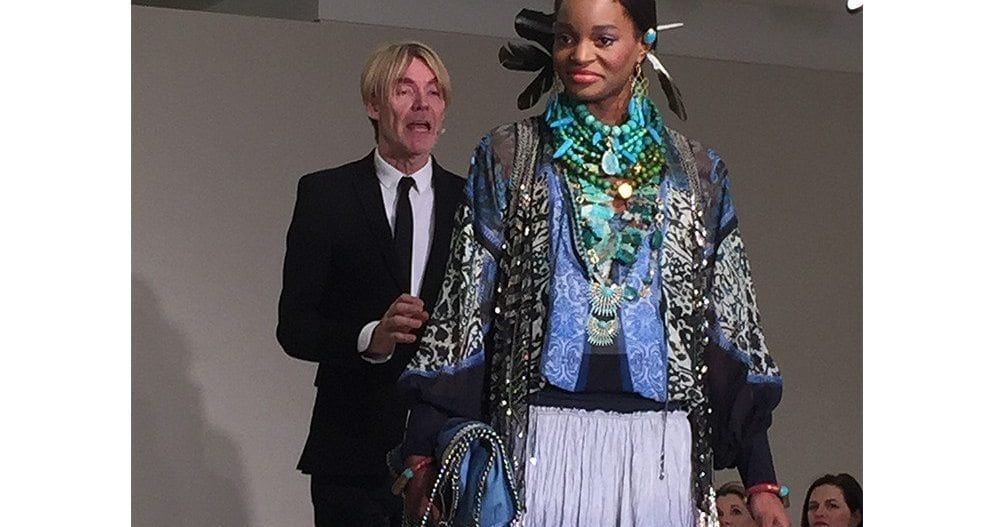 “I will say that “age appropriate” dressing makes me crazy.” 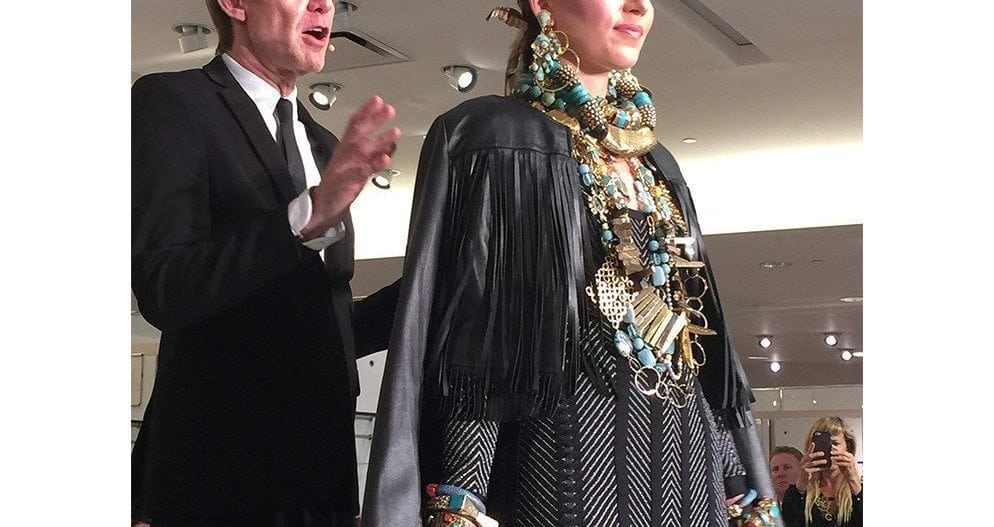 “One child is fine, but never one necklace.” 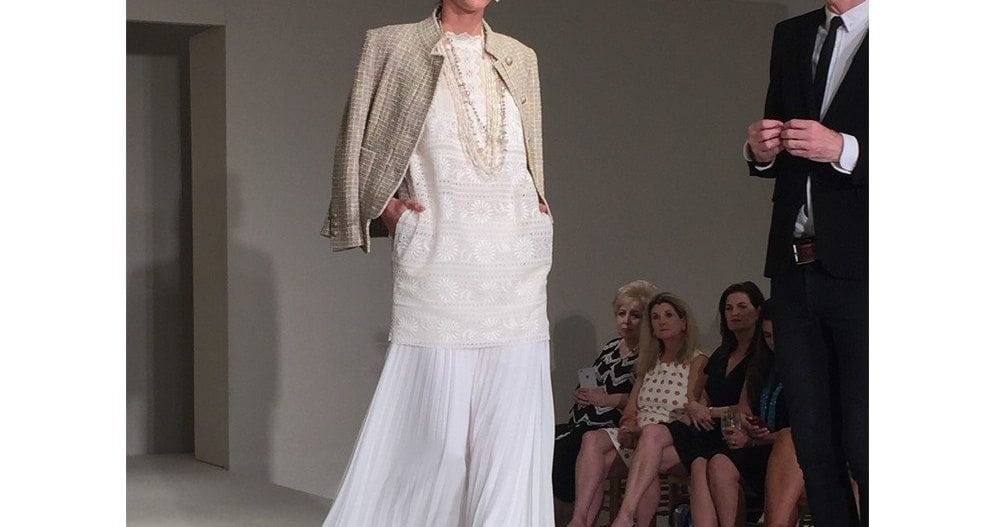 “Jackie Kennedy gave us permission to wear all shades of white, year-round, and to mix them.” 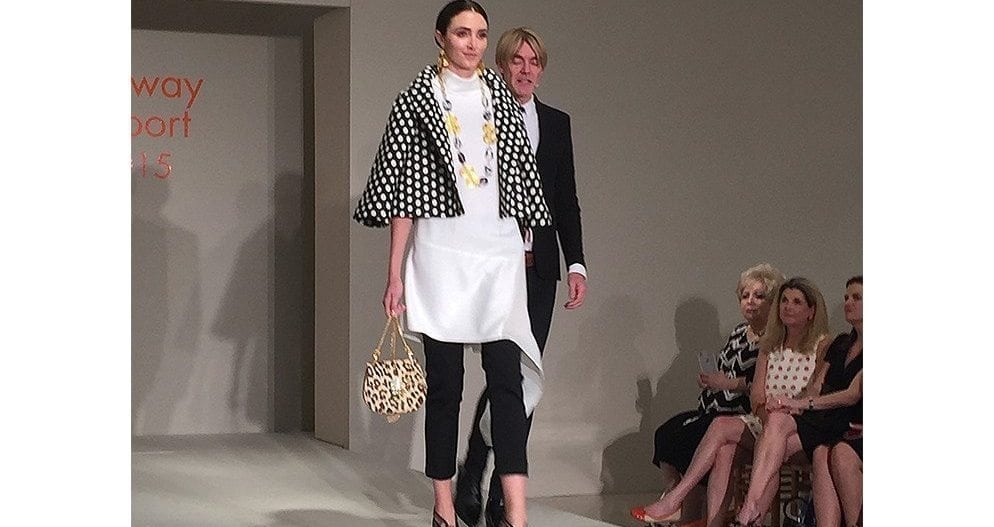 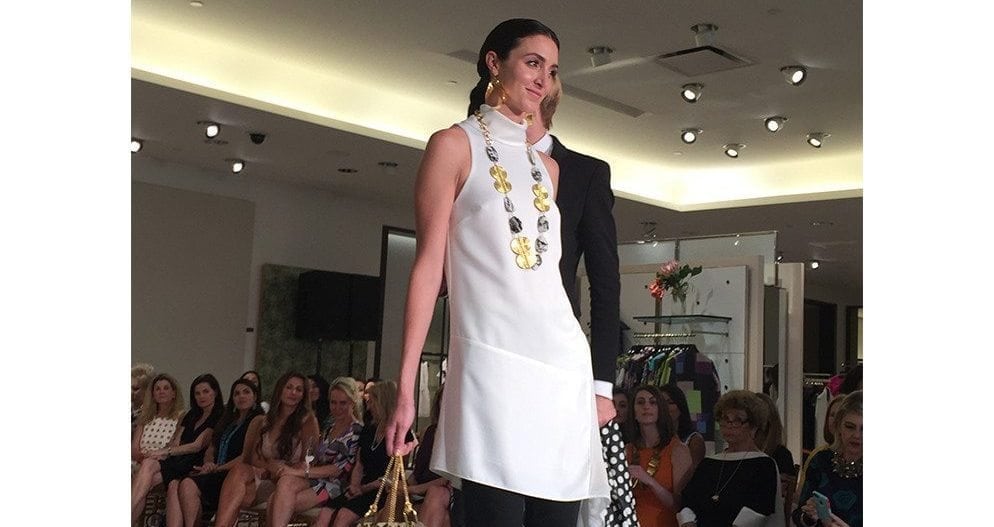 “My advice is always, if you feel great, and you experience fantastic confidence when you put it on, you probably look great.” 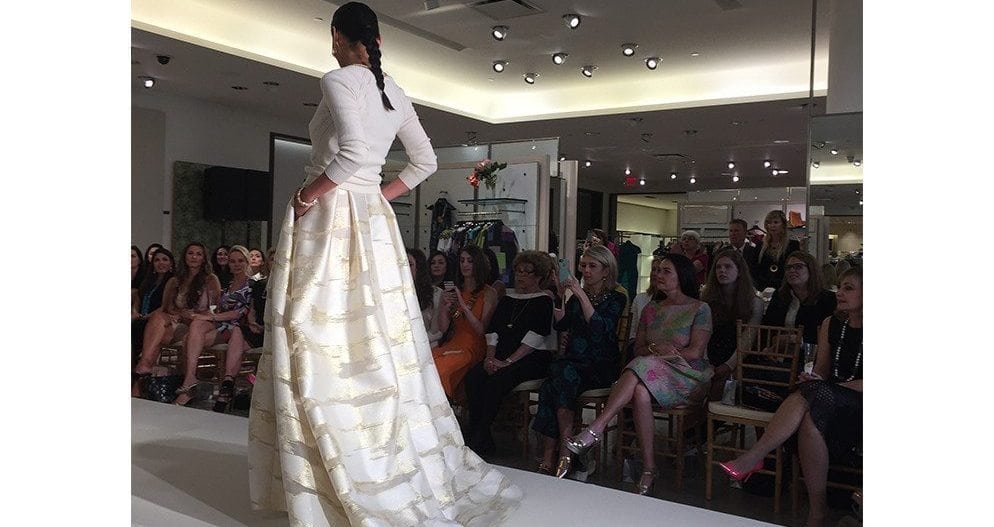 “Reinvent an evening dress with a cashmere pullover.” 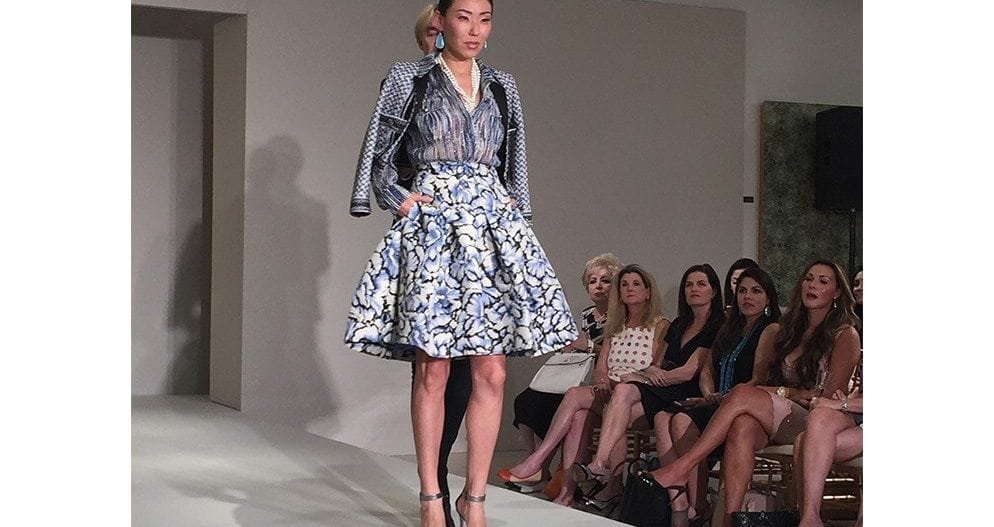 “There are gorgeous clothes out in the world, and I think women sometimes feel they’ve been abandoned when they really haven’t.” 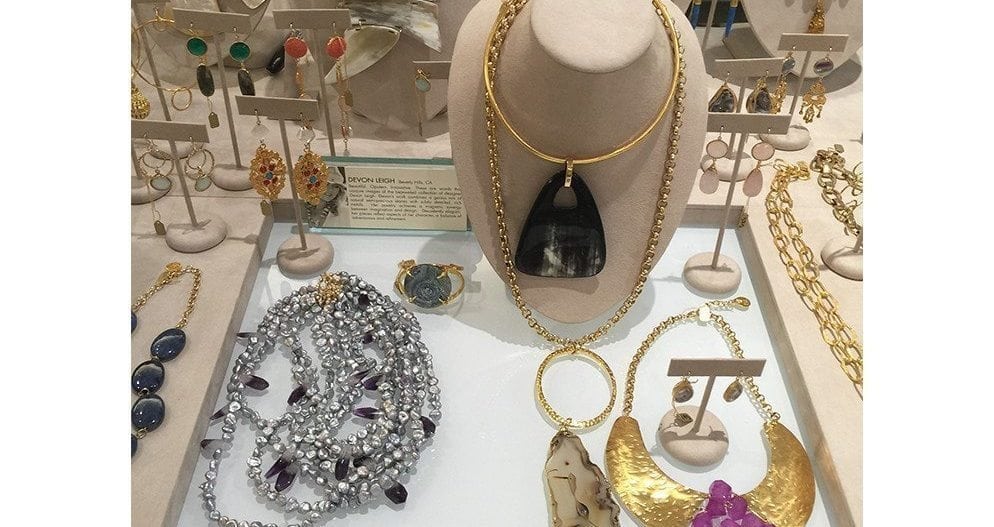 “Devon Leigh brought eight trunks of jewelry with her from LA. Six of them are on the models.” 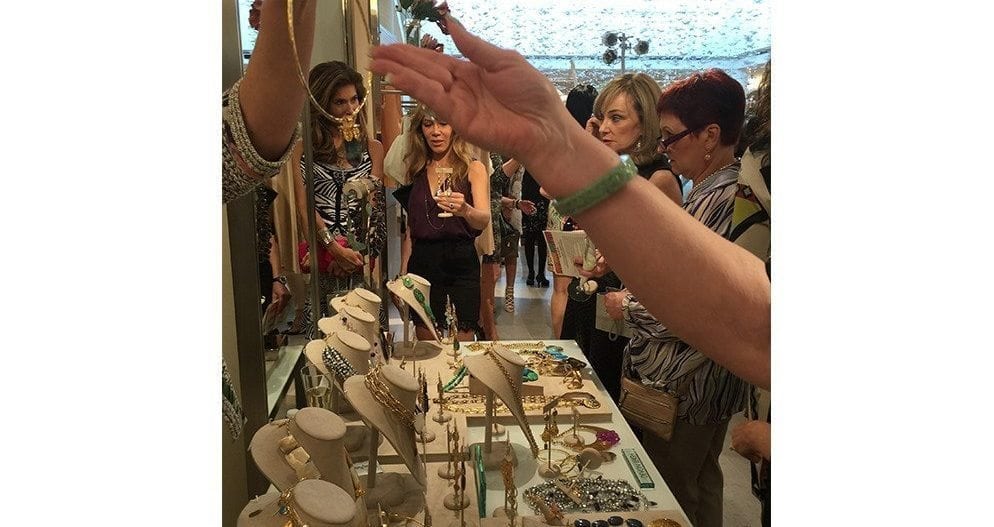 “They’re focused on the magazines, on what Hollywood is wearing. Sometimes I think the noise of fashion scares people.”

This week 100 women came to Neiman Marcus La Cantera, in San Antonio, to be inspired by Ken Downing, Fashion Director and Senior Vice President for Neiman Marcus, and to see Neiman’s 2015 Spring and Resort fashions. Anyone who follows fashion is familiar with Ken Downing. He’s not only the face of Neiman Marcus, but the definitive tastemaker, stylist and fashion arbiter for anyone interested in clothes and great style. If he’s not on an airplane, meeting with designers, or sitting alongside Anna Wintour at Fashion Week in New York, London, Paris and Milan, Ken is collecting 20th Century contemporary furnishings and art.

“DON’T GO SHOPPING WITH YOUR GIRLFRIENDS, BECAUSE THEY’RE GOING TO TELL YOU THE OPPOSITE OF WHAT YOU WANT TO HEAR.”

If you’ve never been to a Neiman Marcus fashion show, you don’t know what you’re missing! Before the show started, I sat down with Ken Downing, a fun, funny and engaging man, to talk about fashion and women over 40.

KEN: I love that your 1010ParkPlace audience is not 12-year-olds. It’s important that we engage younger generations, but I wish they were more interested in fashion and having a great looking home. Gracious living is about everything in your life: How you prepare a meal; how you present yourself and put yourself together.

BRENDA: Is fast fashion having an effect on couture?

KEN: I think what’s interesting about couture, and we saw Karl Lagerfeld embrace this year’s ago at the house of Chanel, the importance of fashion really being relevant and being based to the street—not being street fashion—but the idea that clothes have to feel in the here and now. We like the dream of the runway and the fantasy that haute couture can be, but clothes have to feel like they’ve stepped off the runway and become the reality of a woman’s closet.

We’re seeing sneakers appearing on the runway, and we’re seeing customers who’re buying couture and haute couture that’s not just a Rose Bowl Parade, one-time wear. I like that there’s now becoming a balance of that fantasy and more of a reality.

BRENDA: Along those lines, I’ve developed a passion for Brunello Cucinelli.

KEN: Why shouldn’t you? He’s changing what’s happening in the industry right now. He’s such a charming, lovely man. He’s tapped into something many designers have forgotten women want: Casual clothes, but they still want to look dressed up. They want to look chic, but they want to be comfortable. Brunello understands there’s something between jog pants and a luncheon dress, and he’s been able to create clothes that feel good on the body. His creamy cashmeres and soft satins look good on a woman when she walks out of the house. You don’t have to be dressed to the nines, but you don’t look like you’re on your way to the gym. I think it’s brilliant. He’s actually reinvented the world of knit, and now we’re seeing everybody in the industry putting knit dressing into their collections, season after season, really following his lead.

BRENDA: Our 1010ParkPlace 40 plus audience is the wealthiest demographic in history, yet a lot of women feel like designers aren’t paying attention to them. They’re hungry for advice. What do you tell women about how to dress?

KEN: It’s interesting because so much of what I do is being in the stores and talking to women about how to dress. I will say that “age appropriate” dressing makes me crazy.

BRENDA: It makes us crazy as well.

Forty looks different on one woman than it does on another, so to say, “You shouldn’t show your legs,” or “Your arms aren’t right in that dress…” Not every woman is created equal. My advice is always, if you feel great, and you experience fantastic confidence when you put it on, you probably look great. Don’t go shopping with your girlfriends, because they’re going to tell you the opposite of what you want to hear.

I say to young designers you have to go into the stores and meet the women who are buying your clothes; who are engaged in fashion and want to look great. That’s why I’m in stores, because not all women are created equal. I’m in showrooms all the time and hear, “Where are the sleeves? Where are the sleeves?” Sleeves are not an old-fashioned idea. Sleeves are chic. We’re actually seeing more and more sleeves now, because designers are sick of me pounding it into them. I also say, “Where are the pockets?” A woman loves a dress with pockets.

I think it’s important your readership understands that even though we follow the runway religiously—because it’s where the ideas come from, and the dream of the runway is what really propels fashion forward—we are out in the marketplace, looking for clothes for all women. I am the eyes and ears, on the ground, that are guiding my buying team, and I don’t only have eyes for clothes for a 17-year-old girl. I have eyes for clothes for women of every age and every lifestyle. Because I travel around the world—from Shanghai to Sydney to San Antonio—I know what women are looking for. Trends are something that move us forward, that keep us looking relevant to the moment.

KEN: There are gorgeous clothes out in the world, and I think women sometimes feel they’ve been abandoned when they really haven’t. They’re focused on the magazines; on what Hollywood is wearing. Sometimes I think the noise of fashion scares people. I really try to make sure, through all of that noise, there’s solid advice and solid education. I’m very forthright when I do a show. I may do something super exotic and over the top, because I like a little shock value. You need to have people’s eyes readjust to the moment: Now the lines are getting longer, things are more languid, there’s the whole 70’s moment happening, and then you can bring them back with ideas they will relate to and understand.

The eye, as Diana Vreeland used to say, has to travel, but the eye also needs to rest on an idea and contemplate it so your eyes can start to say, “yes.” I see so much, so my eyes say yes to new ideas, but good ideas. There’s a lot on the runway that never makes its way to Neiman Marcus because no woman wants to look like that. Every woman always wants to look her best. She wants to be beautiful, or look her prettiest, and if she tells you she doesn’t, she’s probably not telling the truth. I’ve never met a woman who says, “Is there anything to make my hips look bigger, or my backside look larger?”

The Return of Pantyhose