I’m Living in a Film Noir 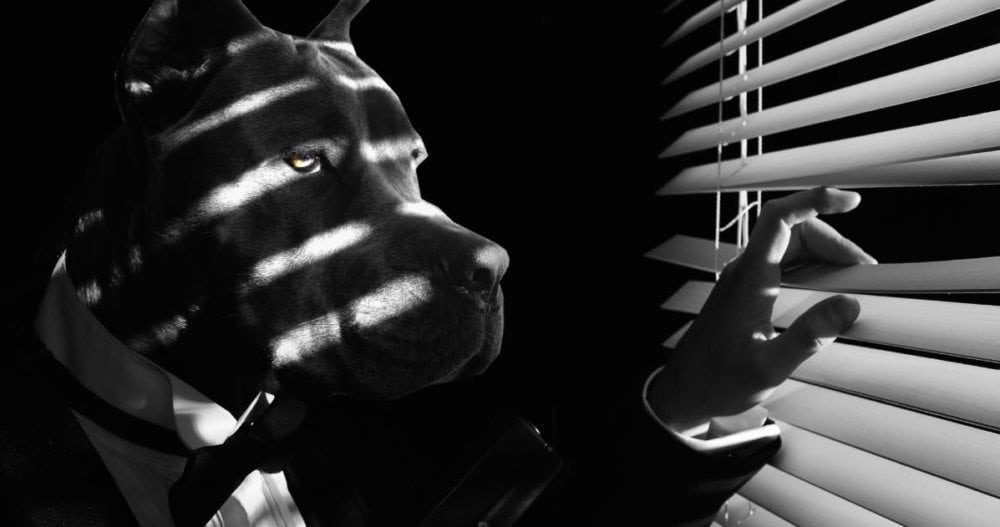 It’s been a four-police-car-day at my new apartment building. This morning it sounded like the people in the apartment above me were hurling furniture, and one another, across the room. At some point, two police cars pulled up in front of the building. The burly guy upstairs—with the word “SEMPER” in a six-inch tattoo down the back of his left calf and a “FIDELIS” tattoo down the back of his right calf—went outside and spoke to the police. Together they all went upstairs where the stomping and throwing continued, even after the police left.

I thought I was moving into a chi-chi, upscale building, but so far all I’ve seen is its dark and seamy underside.

My dog, Sam, barks at everyone, especially the woman in the burka and her male companion who hauls large, heavy, metal suitcases in and out of the building. This morning at 4:30am, a police car and a tow truck hauled their car away from the “No Parking-Tow Away” zone in front of my window. (Did I mention I live on the first floor? My desk faces the window, so I have a front row seat for everything.) Their car’s been parked there, more often than not, since I moved in last week. Later this morning, when the man discovered their car was gone, the look on his face made my blood run cold. The same kind of cold as when I collided, hard, with someone wearing a burka at a nearby mall. I’m 99 percent certain it was a male body and a male who grunted from inside that burka. Think about that for awhile… Your blood will run cold as well.

Next door there are the four screaming children. I understand where they get the idea that screaming, versus talking, is okay. After they leave for school, mom and dad start yelling at one another, saying things like “I know my legal rights,” and “I’m going to continue to live here.”

Then there’s the neighbor who told me she’s a retired Major who had her finger on the button of the underground nukes outside Las Vegas. Speaking in rapid sentences she said, “Have you seen the apartment upstairs with the red light in the window? That’s me! I’m command central for anything you want. I’m wearing a dead woman’s shirt. Senator John Cornyn likes me a lot and is going to help me learn to fly.” Oookaay… If she was a Major in the military, I was the King of Siam.

In the meantime, I’ve unpacked and am nesting… Uh-oh! The police are back! Mr. Semper Fidelis is outside, again, while upstairs it sounds like a document shredder is working overtime.

I feel like I’m trapped inside of a film noir, waiting for the “coppers” to arrest someone or the bad guys to make a run for it. Let’s hope I don’t turn into the wisecracking detective, although trench coats are in fashion this season.

Downsizing, Am I Becoming the Invisible Woman?