I’M WITHOUT A MAN IN MY LIFE 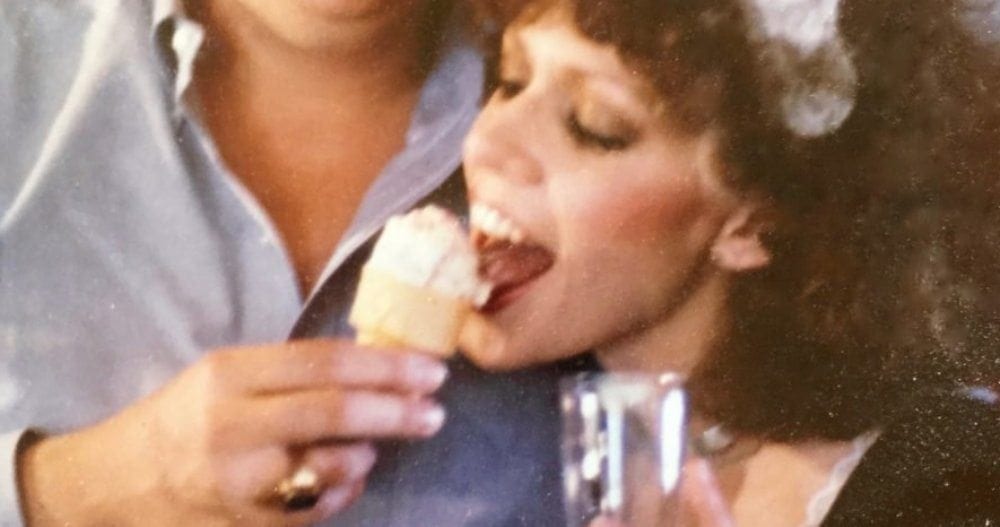 My friend and I when we were 23. I'd just won First Place at the Austin Spam-a-Rama with my "Spam Wellington & Madera Sauce," original recipe borrowed from Julia Child. I served it on a silver platter & was dressed in a short, French maid's outfit with black fishnets and high heels. We're eating Spamoni Ice Cream, which won Second Place. Photo by my first husband.

The other day I had lunch with a dear friend I’ve known since college. He and my first husband and I travelled together on some of our Indiana Jones expeditions, digging for minerals and Mayan artifacts. He also knew—and disapproved of the boyfriend from Hell—but loved and respected my second husband. When I told my friend this was the first time—since I was 18—I don’t have a man in my life, he was surprised.

I think what surprised him most was that I wasn’t looking.

Even though I’ve always been a serial monogamist, I’ve never had long lulls between relationships. I’ve also never set out to meet anyone. It just happened. With each of my three, major relationships, we’d known one another before we started sleeping together… I almost said “dating,” but when you’ve known someone for awhile, you have a tendency to skip the “so where did you grow up” part.

From my friend’s perspective, I understand his surprise that I’m not in a relationship. The question he should have asked is “Why?” I’m not sure I even know the answer to that one.

I sometimes think I’ve had abandonment issues. My father, who died when I was 12, was emotionally unavailable. Perhaps I’ve been looking for a man who didn’t abandon me in some way. I’ve succeeded and failed—sometimes with the same man—but that no longer matters to me.

Maybe I’m content being alone because I don’t have the sexual urge that comes with estrogen. I had this conversation with my doctor, who suggested vaginal estrogen might give me the impetus to seek a relationship. Truth be told, I’m not sure I want a relationship. Besides, my breast cancer 12 years ago was estrogen positive, so I’m not willing to bet my life–on just any man–that estrogen won’t feed a random, stray cancer cell.

My first husband once told me when women reach a certain age, “they start cramming for their finals.” They latch on to anyone within arm’s reach. That’s been confirmed by many women I’ve known. Most, including my mother, married men they shouldn’t have married. Perhaps the idea of growing old without a mate—or financial security—made them say, “I do,” when they should have said, “This isn’t a smart decision.” I’d like to think our generation is not as financially dependent on a man, but I do understand wanting someone with whom you can share your life. It’s also been my experience that men of a certain age are also looking for a mate, but I think men are looking for someone to take care of them in their twilight years.

I’d also like to think I’m not looking for a man because I value myself more than I did when I was younger, plus I no longer have abandonment issues. That’s not to say if a smart, healthy, funny, adventurous, interesting-looking, nonsmoker, who’s not a bullshitter, or a player, comes along, I wouldn’t at least think about it.

Your Body In The Bedroom