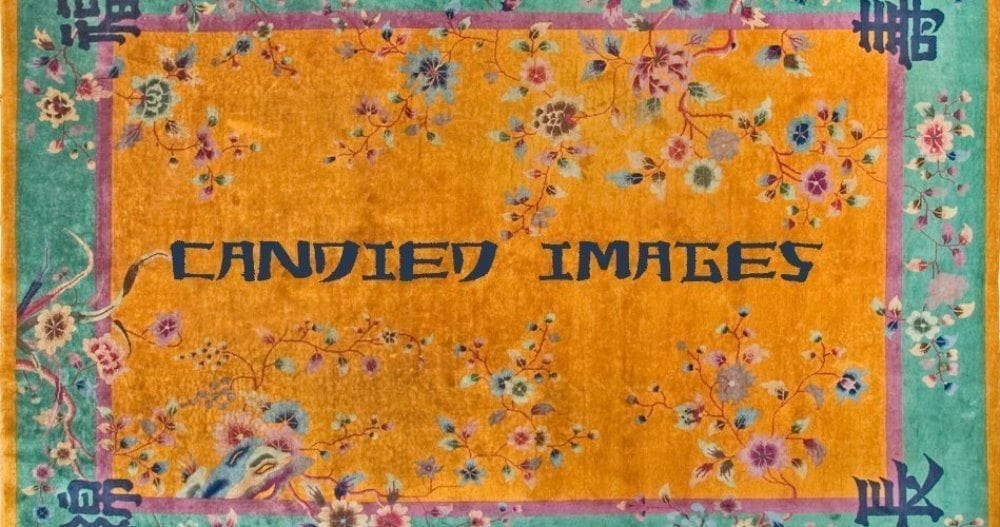 When my friend, Tina, returned from Hong Kong, she brought me a gold drawstring bag and a tin full of candies. The bag is small, made from fabric worthy of a royal robe, but the tin is uninteresting and void of color. The candies are small and hard and wrapped in a waxy paper that smells of oranges, old shoes and urine. I unwrap one and bring it to my nose, unable to do mored than speculate about its appeal. I wonder if the Chinese reserve the candies as punishment for petulant children, or maybe they place them in the mouths of deceased relatives, an offensive offering designed to ward off evil spirits.

Tucked inside the tin is a piece of brittle yellow paper. Lilies and what looks like figs and mangoes trail delicately down the sides of the page and scroll along the bottom in red ink, then blend into brush strokes of Chinese script and one line of English that reads, Mr. Chan Tea Room.

BETWEEN BITES, THEIR VOICES RISE, AS THEY EXCHANGE HIGH NASAL COMPLAINTS ABOUT THE FISHMONGER WHO CHARGES TOO MUCH FOR WHOLE FISH AND INSECT CRABS.

Over the next few days, I find myself drawn to the tin, repeatedly opening the lid and grimacing at the repulsive odor. Surely, there is something I am missing. I decide to give the candies another try. Perhaps the flavors will meld and reward me with an exquisite surprise.

I unwrap one and place it in my mouth, grimacing as the foul smell permeates my nose and twists my tongue in disgust. As I resist the urge to spit it out, I unfold the yellowed paper inside and re-read the small red script: Mr. Chan Tea Room. The longer I stare at the page, the more the decorative border resembles a proscenium, surrounding a stage, on which my imagination begins to project faint and faded scenes like the ones on the outside of the tin.

I imagine Mr. Chan Tea Room is known only to the residents of Hong Kong and serves diminutive women with round bun feet; their hair slicked back and knotted tightly behind their neck. The women enter from the street, shuffling in a halting manner on stilted wooden shoes, their true feelings hidden behind masks of polite propriety. A small, flat-faced man, presumably Mr. Chan, ushers them through a curtain of cloisonné beads, to an ornate room with rice paper ceilings that float high above dark marble pillars.

The women take their seats and order tea and small cakes of goose liver, sandwiched between sliced hard-boiled eggs, wrapped in cabbage leaves. They sit stiff and erect, silently observing the other residents, who also dwell near the street of Long-Necked Swans. When their tea and cakes arrive, the women eat with pinched precision, their chopsticks clicking rhythmically on plates hand-painted with mockingbirds and tall bamboo.

Between bites, their voices rise, as they exchange high nasal complaints about the fishmonger who charges too much for whole fish and insect crabs. They trade greedy bits of gossip, about the family behind Woo Fong’s, whose daughter abandoned them to study western marketing in America. Surely her family knew she would disappoint them. The girl’s eyes are too large and see too much, unlike her mother and her mother before her, who saw much, but acknowledge only what is put in front of them.

When the women finish eating, the waiter brings more tea. Mr. Chan presents a lacquered tray full of small candies for their approval. The women’s eyes light-up as they each take a candy from the tray, then pop it into their mouth and purse their lips. In ritualistic fashion, they fold their hands in unison and place them in their laps.

In a few moments, the oldest one begins to speak. “I see another woman here with us.”

“I see her too,” says the woman in the red dress. ”But she is not one of us. Not Chinese.”

The older woman leans back in her chair and closes her eyes. “No,” she says. “But she is most fortunate to have discovered the pleasures of our candies.”

Boxes of Life and Love

How to Build a Better Wardrobe

I ALMOST FELL FOR A PHONE SCAM