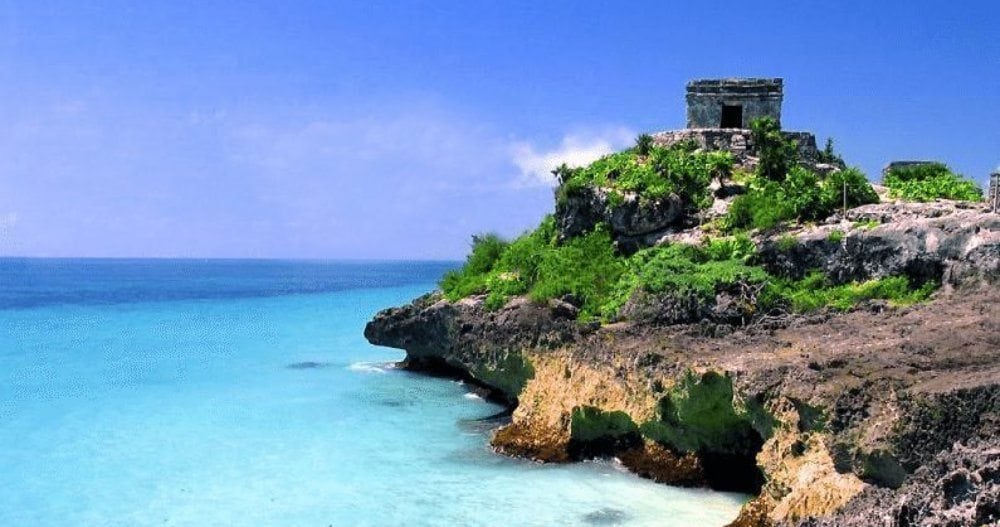 I’ve been thinking a lot about one of my favorite places in the world, Tulum, the walled Pre-Columbian city in the Mexican Yucatan Peninsula. It’s very different, today, than when I first saw it it over 30 years ago. It holds such special meaning for me that I don’t want to see what it’s now become: a resort full of tourists, clubs and drinks with little umbrellas. I want to take you back in time and tell you about my Tulum.

A two-headed serpent sat on the rocks next to us, its tongues darting in and out of twin throats.

Even the name, Tulum, fills me with wonder and reverence. It is magical and mystical. The Mayans believed it was the place where the sky was born—Sh’ian Ka’an—ascending from the sea, soaring upward like a giant bird in flight. With each flap of its wings, it painted broad strokes through the air, taking the blue from the sea and the white crest from the waves. Together with the toucans and herons, the howler monkeys and jaguars, they surround and protect my ancient Mayan city of Tulum.

I remember the first time I saw Tulum. There was no road; no directions; just stories about how untouched it was by modern man. We battled the dense three-canopy jungle, enduring mosquitoes so thick they hovered in clouds around our eyes and ears, filling our nostrils with a buzzing sensation that felt like a mild electrical shock. We worked most of the morning, chopping and hacking our way through vines as big around as our waist. Soaked with the salty taste of sweat and an insect repellent that served little purpose, we turned around to look at our progress, only to find the jungle had removed all traces of our presence. It was like nature was reminding us of our insignificance: mere mortals, present for a millisecond of God’s time.

At some point the jungle gave way to a series of small lagoons and meandering palm trees. A cool breeze caressed our skin, leaving behind small patches of crusty salt on our arms and legs.  And then… There it was. Perched on the edge of a cliff. A small Mayan temple, towering above a sparkling white beach and the mesmerizing blue of the sea. I ran toward Tulum like a child runs toward the outstretched arms of a loving parent. I stopped to trace the carved relief images in the stone with my fingers, then was drawn, inexplicably, to the top of the temple.

A local emerged from the jungle, barefoot and brown-skinned. He climbed to the top with ease and grace and sat next to me on a ledge overlooking the sea. I noticed his eyes were yellowed and smiling, playful and wise; welcoming me like he would an old friend who’d returned from a long journey.

Pretending to strum a guitar, he softly hummed an exotic melody. “The Murder of the Jaguar,” he called it. A two-headed serpent sat on the rocks next to us, its tongues darting in and out of twin throats, hissing in a syncopated rhythm with the native’s song. Perhaps the serpent was a descendant of Quetzalcoatl, the feathered snake god. Perhaps it was there to remind us of the beauty of its Mayan ancestors and the power of Tulum.

Thirty years later, I sat on the edge of the same temple Castillo, watching as a barracuda cruised back and forth, below, in the waters of Sh’ian Ka’an. I said the name over and over again in my mind like a mantra: Sh’ian Ka’an. The place where the sky was born.

Overhead a bird let out a startled human-like cry. “The invaders are coming,” while behind me, a bus load of pale-skinned tourists with fanny packs approached like bargain hunters at a garage sale. I was reminded of a refrain from a Joni Mitchell song: “Find paradise. Put up a parking lot.”

I watched as a man and woman ignored painted frescoes on a nearby temple. The faded colors depict Itzamná, the sky god, and the rain god, Chac, together with the moon, the stars and all the fish below. As the couple moved on, bits of their conversation drifted upward on the wind.

“You think they sell margaritas here?” the man asked. He wore a Dallas Cowboys cap and a New Zealand Hard Rock Cafe t-shirt.

“I don’t know,” the woman replied. “But I hope they have someplace I can buy one of those little ceramic frogs.”

I watched as they hurried past and wondered if they “appreciated” the beauty of New Zealand as much as they appreciated Tulum. I was sad and depressed by the changes since my first visit, and I remember wishing the jungle would close in around me, leaving only me, Tulum and Sh’ian Ka’an. The place where the sky was born.

Like a time traveler, I would gather the energy around me and become part of the painted histories of warriors and virgins, princes and priests. I would enter hidden rooms filled with cups of hammered gold and necklaces of jade and obsidian, then emerge into the sunlight, ascending upward from the sea like a great bird in flight.

The energy vibrates in waves from the temple, Castillo, rising and joining forces with the sea and the sky. I don’t believe it was a coincidence I found Tulum. In some ways, I think it’s part of my past; part of who I am, and who I hope to be. Like a small sapling, I gathered strength and nourishment there. Now, I only go in meditative prayer, to sit on the edge of temple Castillo and watch the sea as my soul fills with rapture.

Would You Wear This?