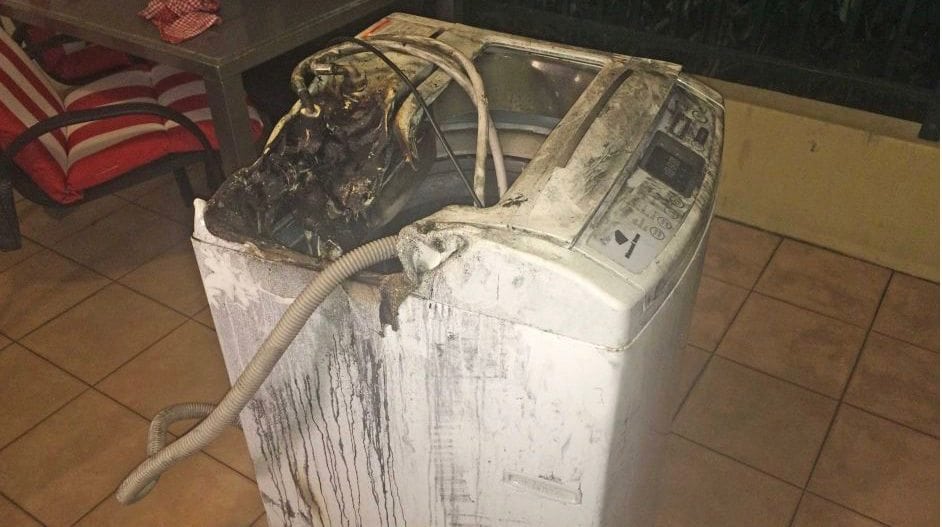 In August of this year, 2016, I purchased one of what would become 2.8 million recalled Samsung, top-loading washing machines (involving 34 different models) that may EXPLODE FROM WITHIN. Samsung has known of almost 750, documented, serious consumer injuries and damages to consumer homes since 2011, but didn’t notify purchasers of a problem with their washing machines until November, 2016. They mailed us “warning labels” with instructions on how to apply them to their machines.

I love this line in their instructions: “You have successfully applied the under-the-lid warning label to your washer.” Gee… Am I supposed to feel better now?

Samsung has a well-documented pattern of not only selling defective, dangerous products, but downplaying the resulting large-scale, life-threatening consequences as though if they ignored them, they would go away. Samsung drug their feet on addressing their Galaxy S7 Note cellphone’s combustible batteries. When they finally spoke up, they promised their Galaxy S8 cellphone replacements were safe.  They were not.

So why should I believe their free “in-home washing machine repair” is safe? BTW, even after their “fix,” they warn you not to run the machine on a high speed with heavy items inside like towels and sheets. Numerous worldwide reports say the machines STILL explode after the company fixed them. The other consumer option is $127 toward the purchase of another Samsung washing machine, or a paltry $27 toward another other brand. This doesn’t acknowledge those of us who purchased “matching” washers and dryers. We’re screwed, regardless, on that one.

Each day since receiving my warning labels, I’ve called Samsung’s recall hotline. Each time I’m told due to extremely high call volumes I need to call back when they’re less busy. Samsung’s recording then suggests I go online to address my problems but then says, “Due to heavy traffic on the website, you may experience ‘latency issues,’ and you may want to reach one of our support channels at a later time.”

Whether it’s the high number of dead and dying Samsung semiconductor plant employees with suspicious, rare cancers and terminal diseases; a fine by the European Commission for being part of a price fixing cartel; the guilty verdict against Samsung’s willful patent infringement of Apple’s intellectual property; Samsung’s knowledge of cellphone explosions dating back to 2012 and now their washing machine debacle they’ve known about since 2011, Samsung needs to take an ethic’s lesson and put the consumer first. As sure as day becomes night, Samsung won’t do that. Why?

In the meantime… Tell me again what the warning label is for? It sounds like a warning about Russian roulette. How many bullets—I mean washes—do I have before my washing machine explodes?

1010 Park Place Book Club: Plum Johnson’s They Left Us Everything

Life Lessons from the Kitchen