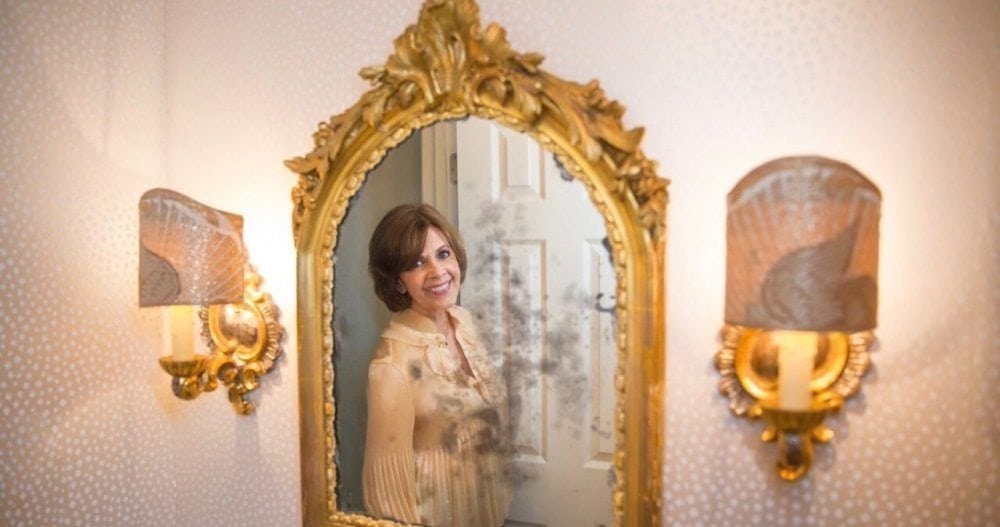 This time last year I took you on a video tour of the house I bought. That was the “Before.” Now I’m going to show you some of the “After.” Even though the house had been “flipped” before I bought it, the bathrooms were a disaster. On my first walk thru, the instant I saw the master bath and the powder room, I visualized what I wanted to change, and that’s never wavered.

Except for things like flooring, most of the pieces in my new bathrooms, I already owned, and each piece has a special story.

BEFORE: The plumbing all leaked; there was no good way to close in the shower; there were too many sizes, colors and directions of tile, and the counter height was too short for anyone but small children. 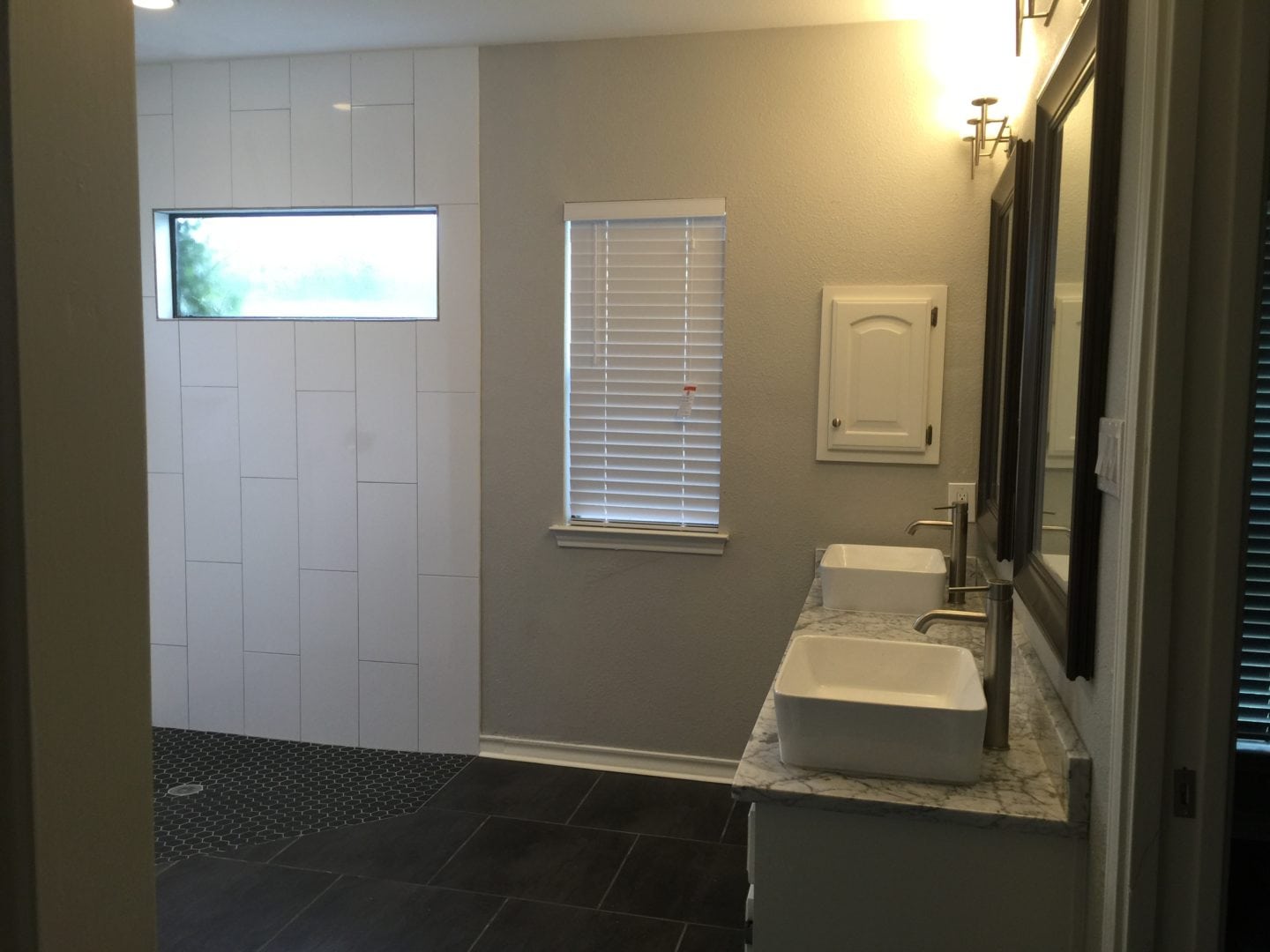 The contractor tore everything down to concrete and studs. Plumbing was replaced, and the floor was leveled with more concrete. 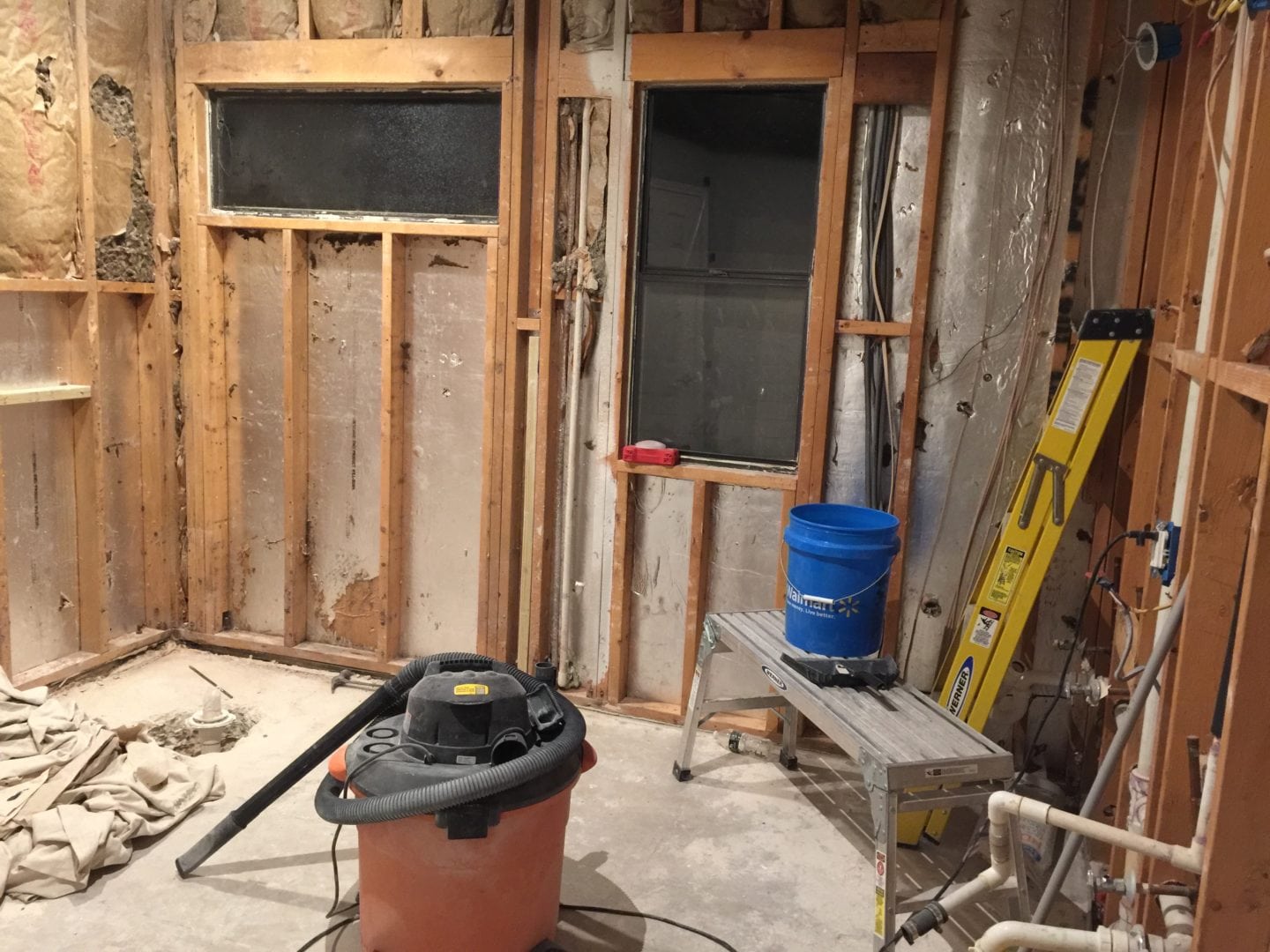 AFTER: The floor and the entire shower were tiled with travertine marble. Instead of a traditional bathroom sink/cabinet, I wanted an old Italian or French console. For months I looked online and found a couple of “museum quality” consoles that were too $$$$$. Then I found this 19th Century one in Round Top, a fabulous, twice-yearly antique fair between Austin and Houston. It had the original marble top (I had it cut later for the sink); I loved the patina, and the price was right, so I hauled it home in the back of my SUV. 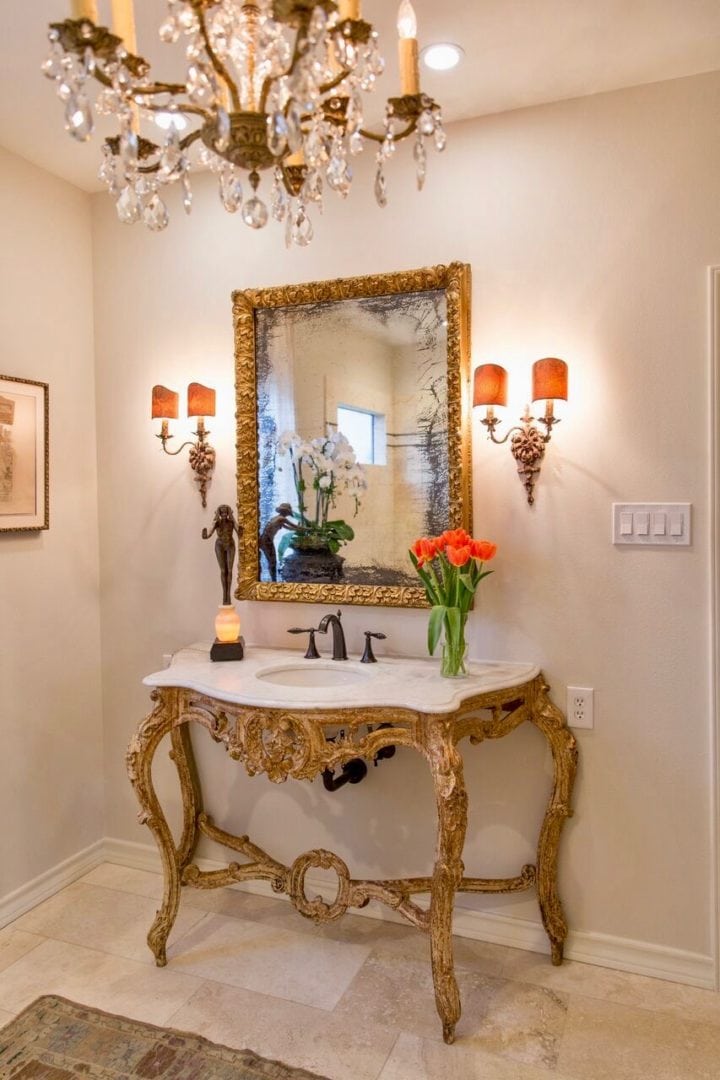 Much of the gilt is missing, plus there are centuries of worm holes. I LOVE the patina on old pieces! It makes me wonder who owned them and how they were used? 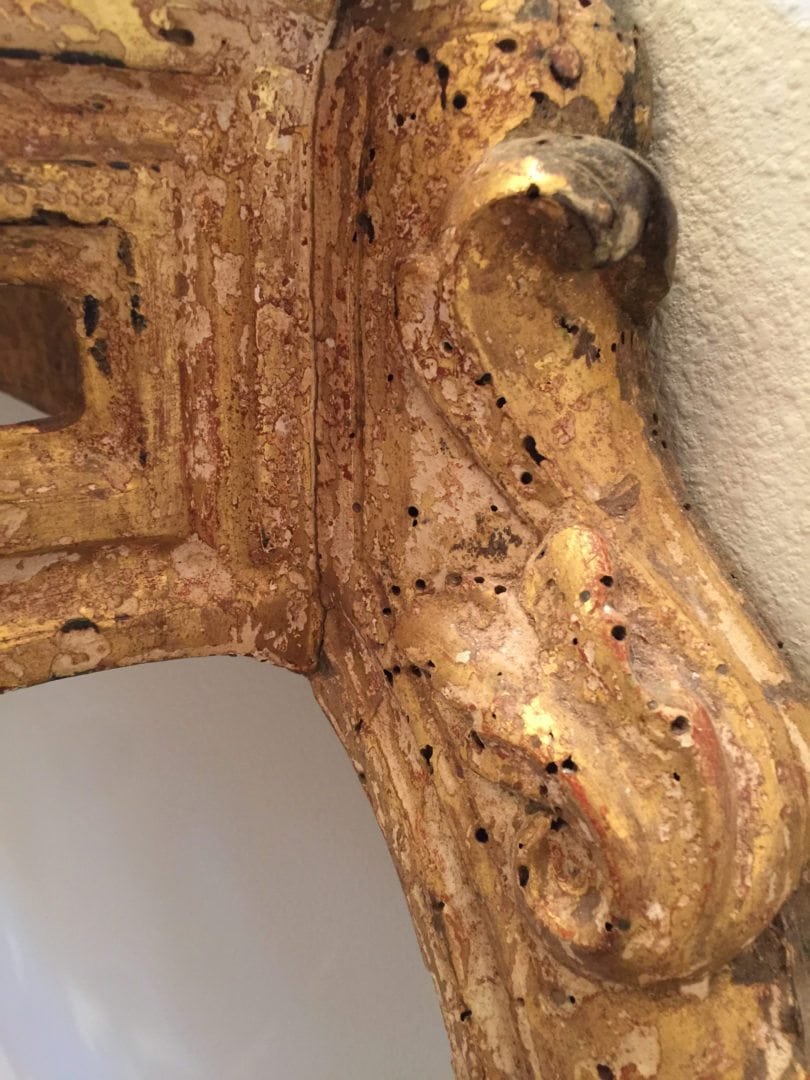 The sconces flanked the fireplace in our Little House at the ranch. They were 19th Century candle sconces I had electrified and shades made from old Fortuny fabric. The Victorian, iron plant stand I bought for the house James and I never got to build, and the Oushak rug was in my dressing room in the Spy House on the Hill. The wooden rosary, hanging from the iron curtain rod–made by a craftsman in the Texas Hill Country–was given to me 20 years ago by an interior designer in San Miguel de Allende, Mexico. 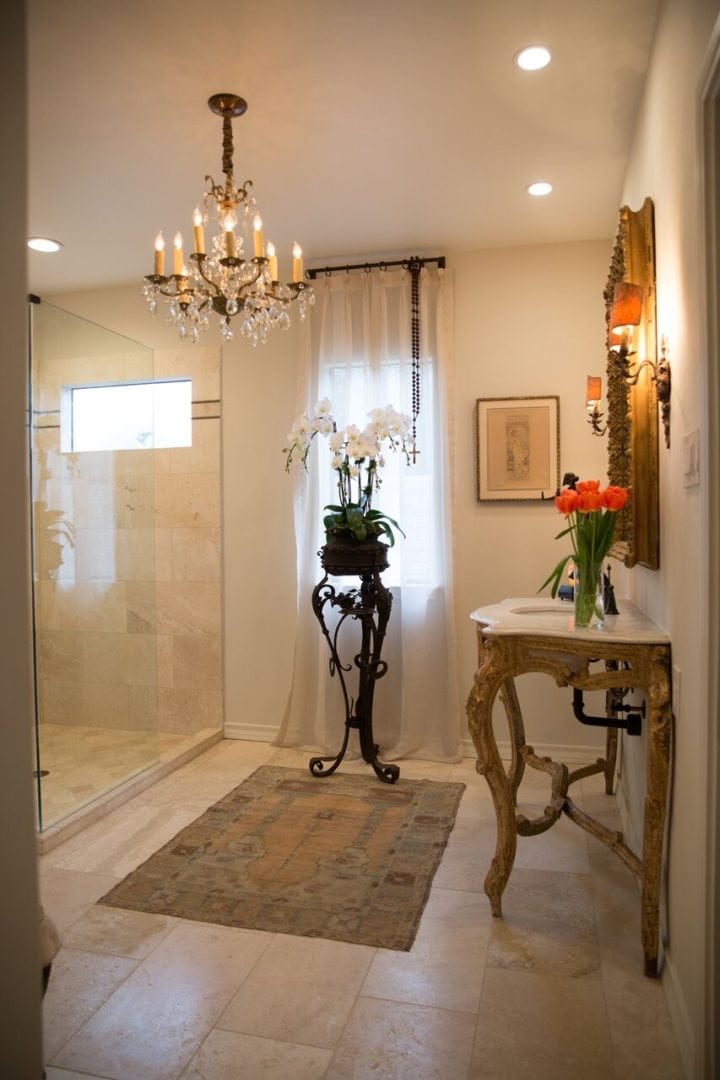 The fish on my shower window are some of my most treasured pieces. My grandmother gave me the big fish after she came for a visit and saw the live goldfish in our giant bathtub. While sitting on the edge of the tub, trolling for those fish, my cat, Blanch Dubois, knocked it over and broke its tail and lips, but I’ll never get rid of it. The little Lalique fish was a Christmas gift from dear friends, because they knew I had other Lalique pieces. Everyday I see these fish and know how loved I am. 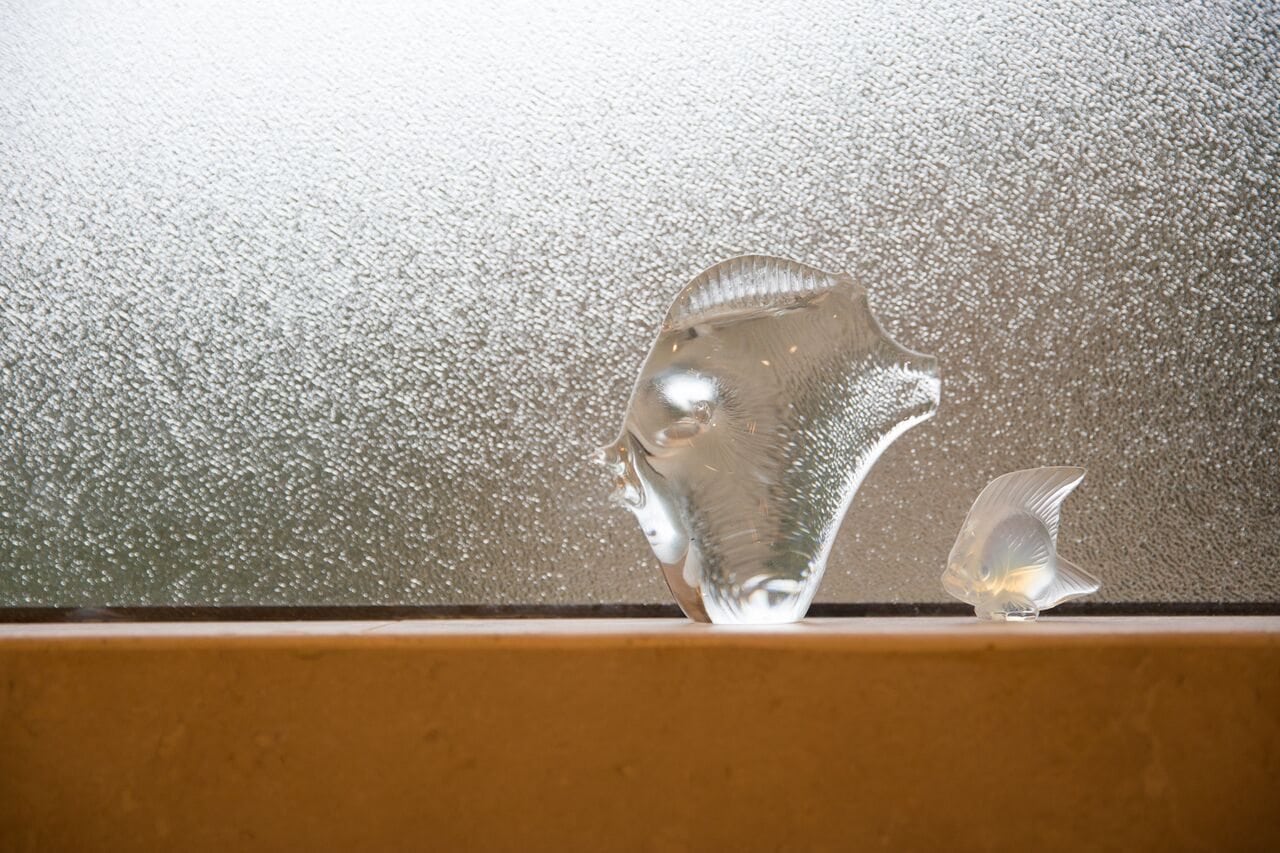 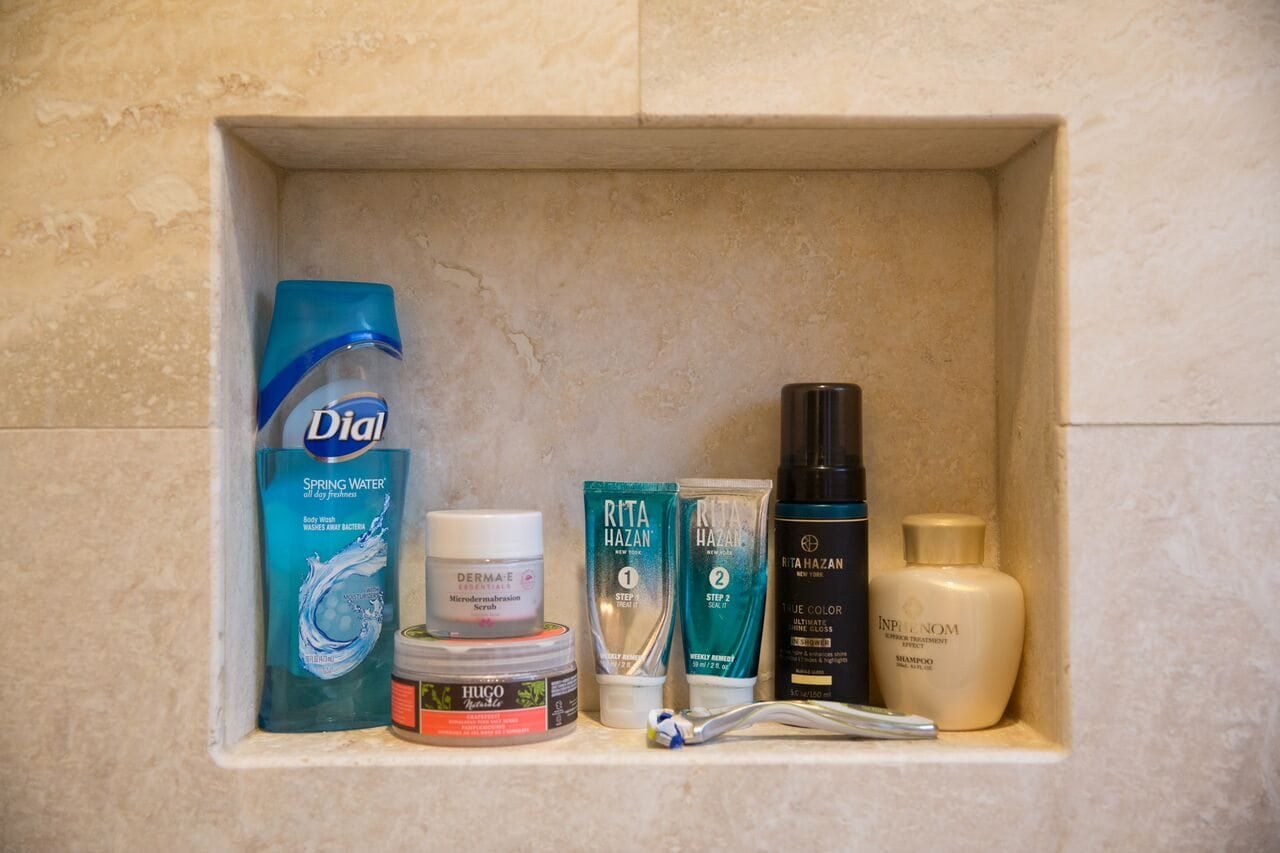 While the contractor worked on the master bath, I disassembled the big chandelier, cleaned and polished it–careful not to take all the patina away–and put it back together. My first husband bought it when we were in a small antique store in Austin after we were married. It hung over the butcher block in our kitchen until I sold the Spy House, and James and I moved to the ranch. 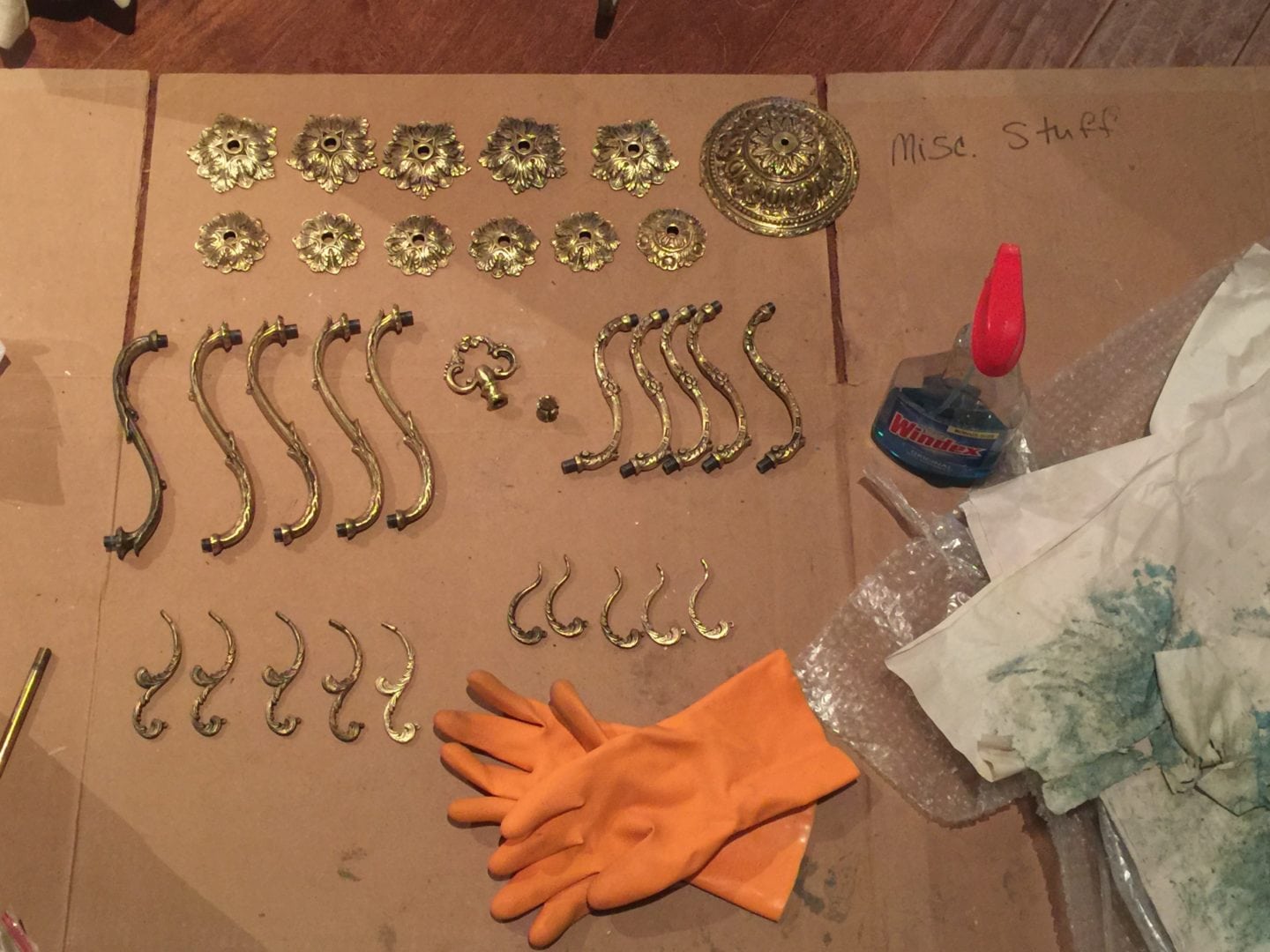 The mirror frame over the sink is old and crusty–I like the patina–but the mirror itself is new with an “old” look. Not sure I’m crazy about that, but haven’t gotten around to changing it. The lighted, Art Deco bronze on the marble counter I bought in my 20’s. At one point I wrote a new will and left it to a friend, who was a Harlem Globetrotter, along with a note: “She’s black, beautiful, has cornrows and a great butt! What more could you want?” 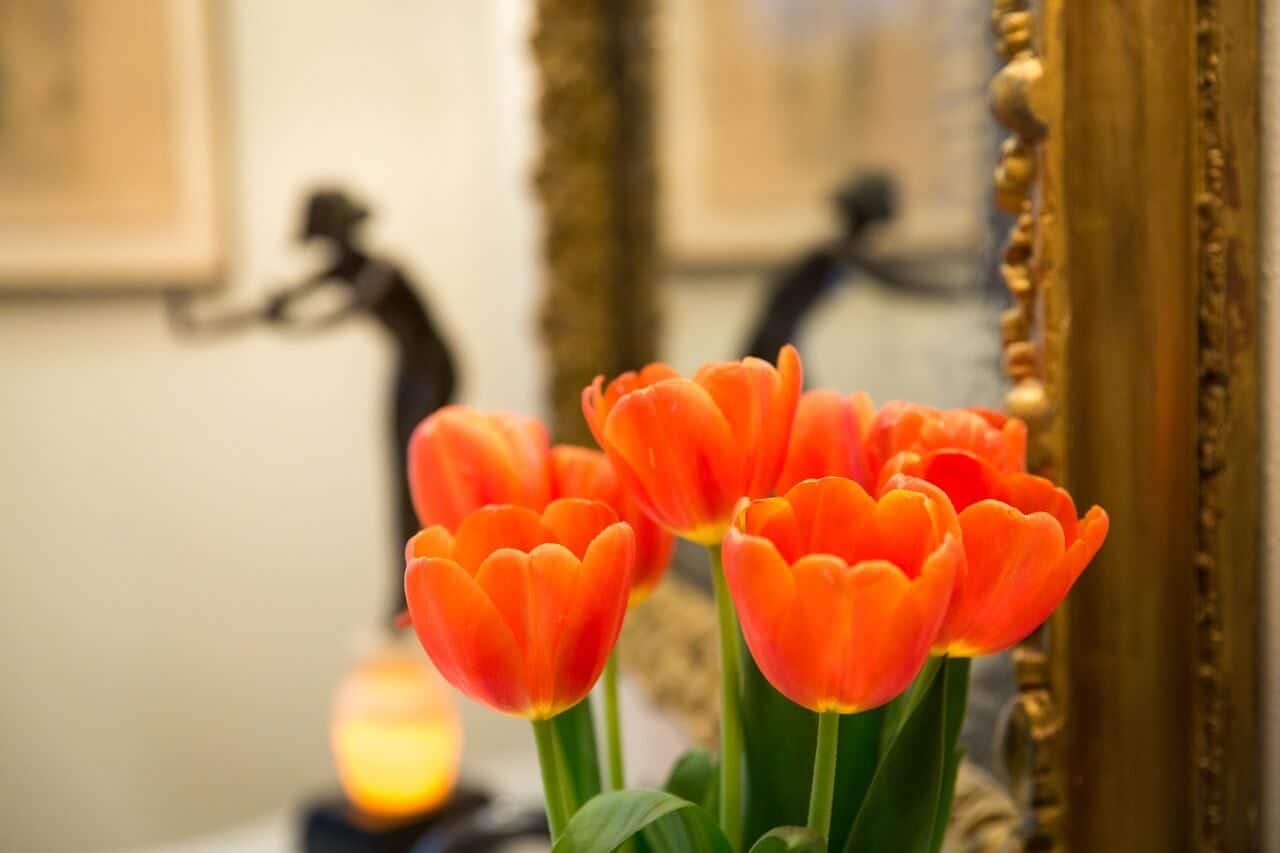 The big, gilt antique mirror on the wall is 5’7″ by 3’6″. I love this mirror! It’s great for getting dressed because I can see all of me. The little seat in front of the mirror I bought for mother’s dressing table when she was in the dementia facility. One day she told me “her mother” had bought it for her… It made me sad she didn’t remember the day James and I brought this seat and a fabulous Art Nouveau dressing table and mirror to her room, but then perhaps she was right… Because we role reversed when I was 12, and never went back, maybe I was like a mother. 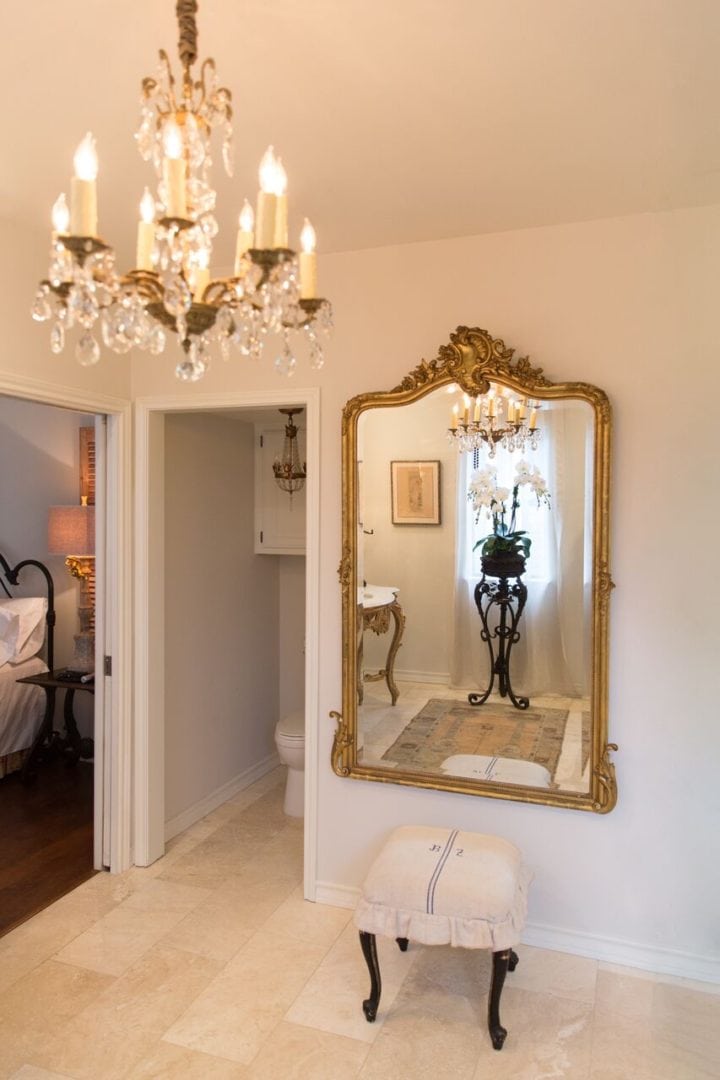 BEFORE: The powder room was a tiny, uninteresting room. Like the master bath, when the faucet was on, water ran all over the floor. You can’t tell from this photo, but the toilet was four inches from the wall and had an elongated bowl.

There wasn’t enough room for a tall person to sit down without scraping their face and knees on the wall. No basketball players in this room!

The rear wall slanted back at a 45 degree angle and had a laundry hamper. Too much for this little room! My biggest challenge was finding a sink small enough so you could close the bathroom door. 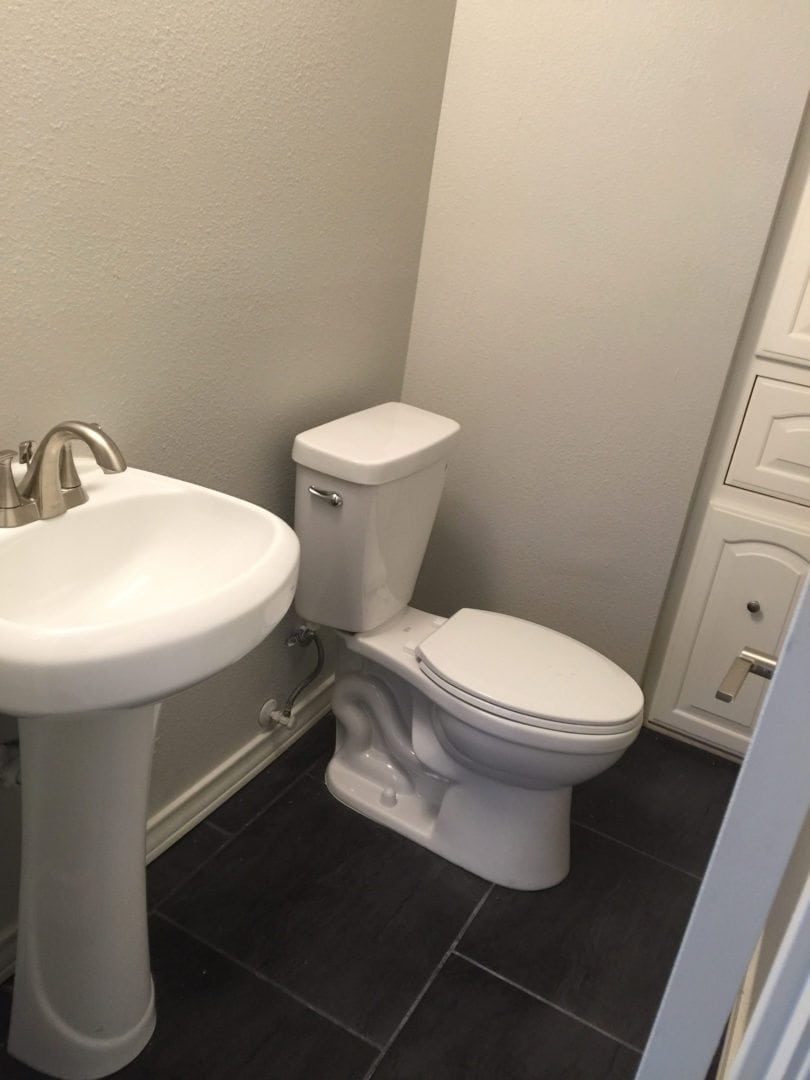 AFTER: Once again the contractor gutted the room down to concrete floor and wood studs. I had him remove the cabinets, square the rear wall and move the toilet back two inches… which required a special flange. I also bought a smaller, round toilet. Those two things gave me almost four more inches, so tall people don’t have to worry now when they sit down.

This floor is also travertine marble. Because the room was too small for a sink/cabinet, and I didn’t like the sink that was there, I found a hand chiseled, travertine, wall mount sink online that left just enough room to close the door. 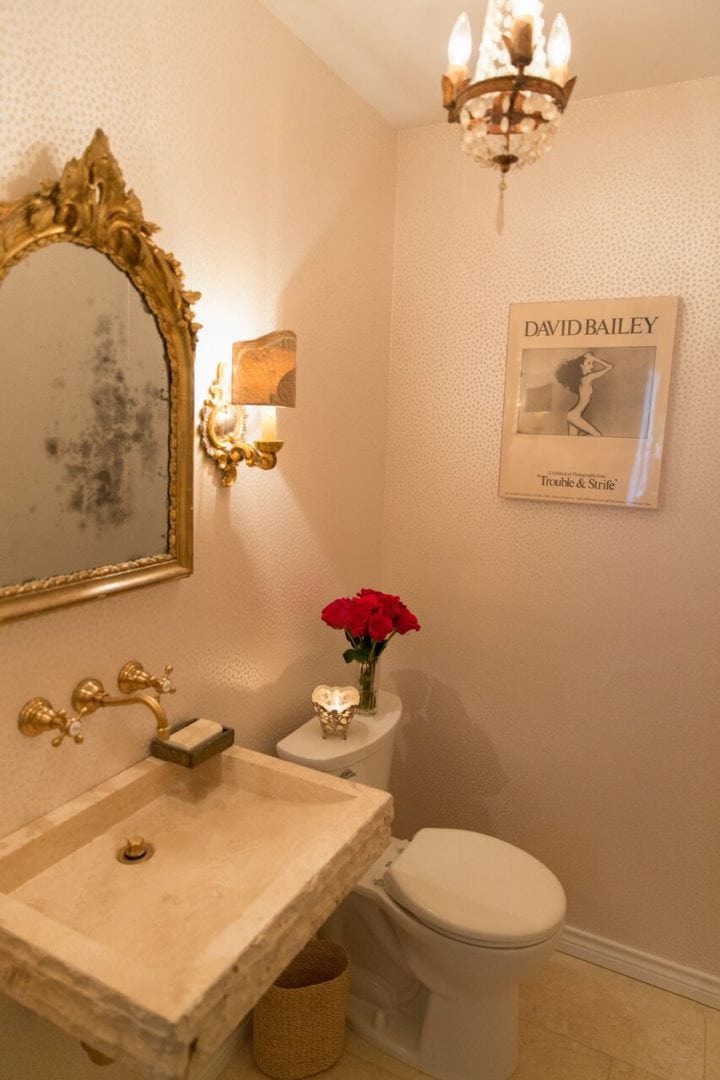 You can’t get the full effect of the gorgeous shimmer of this wallpaper. It’s pearlescent with tiny glass beads. I saw it online from a company in Germany that first sent me a sample before I purchased it. 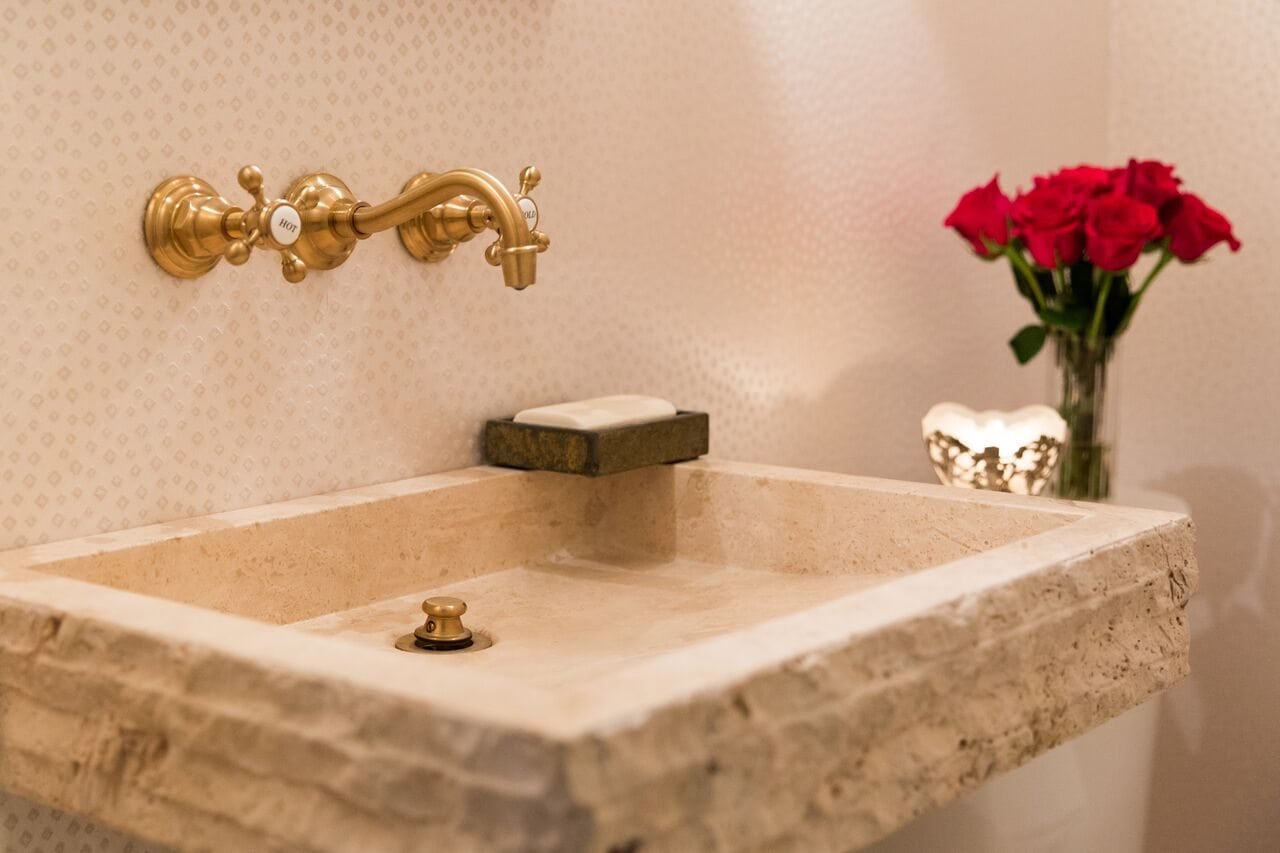 The sconce shades are done in gold and silver threads. Each shade has an angel wing on it. (Perhaps I should name them Brunello.) The sconces and the small, three-light chandelier are on dimmers. Most of my lights have dimmers. 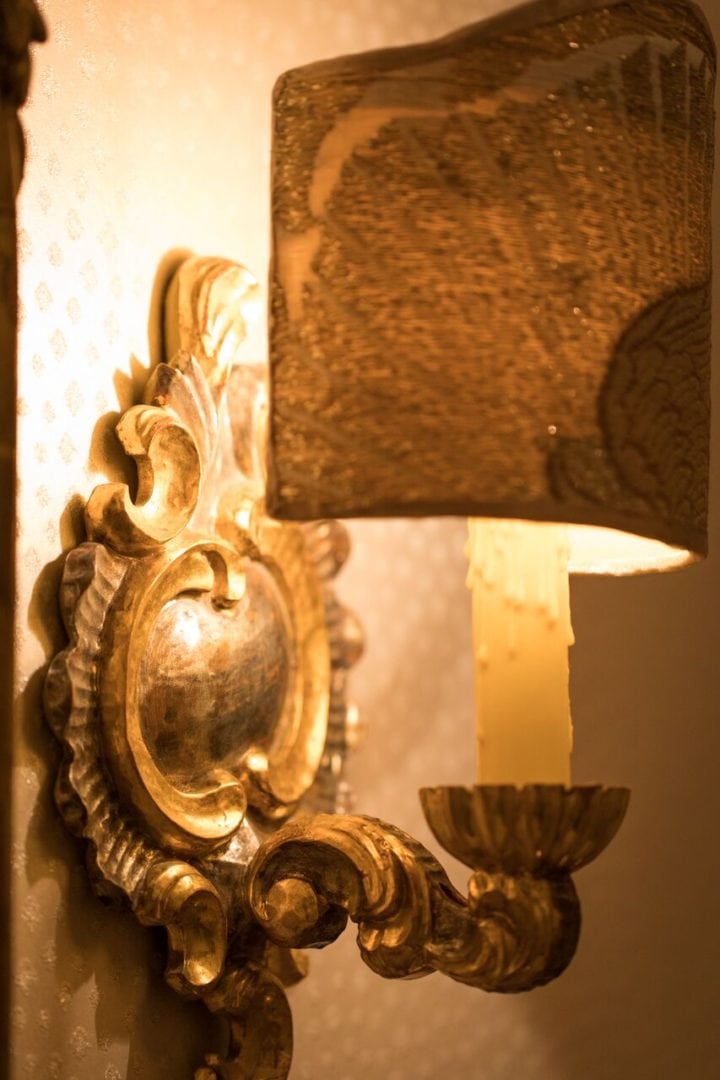 I bought photographer, David Bailey’s, poster at his exhibit in London the day John Lennon was murdered, December 8, 1980. I remember it because when a London cabbie heard my accent and asked if I was American, he pulled the cab over to talk to me about the killing. The television show, Dynasty, was also a hit in England, and the season had just ended with “Who Shot JR?” Heartbroken and confused, the cabbie wanted to know why Americans were so violent? It’s still not an easy answer. 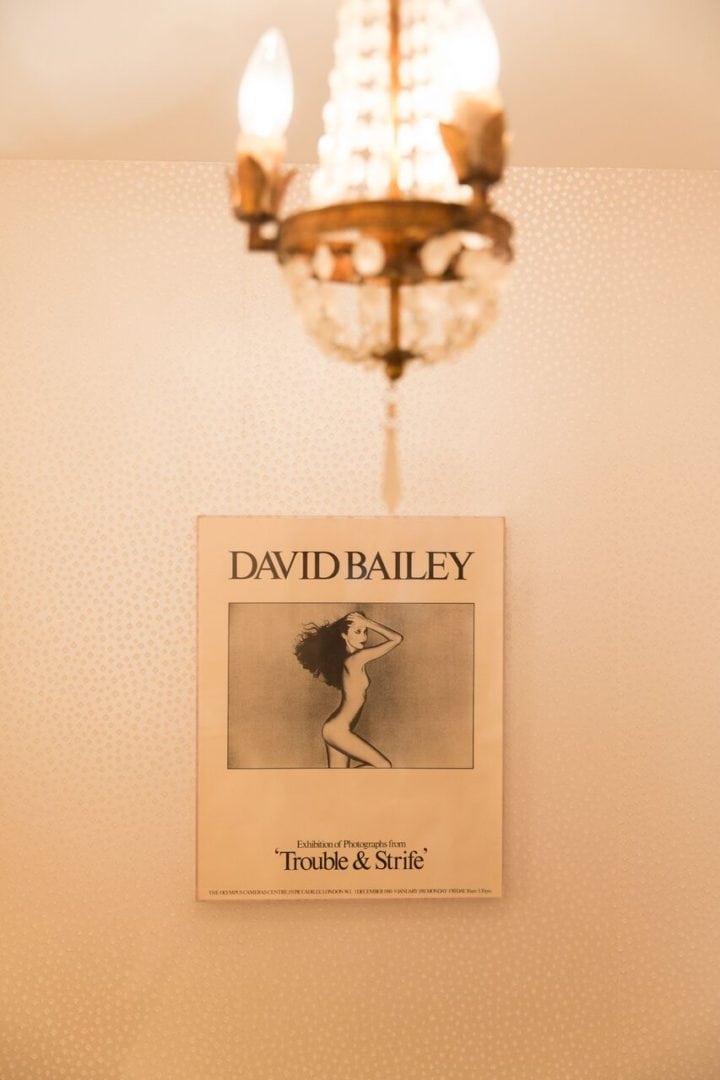 Whether it’s the way we dress or decorate our home, style is the way we mix the old and the new with a flair that tells the world something about us. Like my wardrobe style, with my decorating style, I’m still using good pieces I’ve bought over the years.

Most of my things have been in storage since 2007. Because each one tells a story and holds a memory, unpacking them has been a bittersweet experience. They’re like old friends who’ve been there for the best and the worst of times, and now, like great friends, they’re still here with me.