The Wisdom of the Kalimba 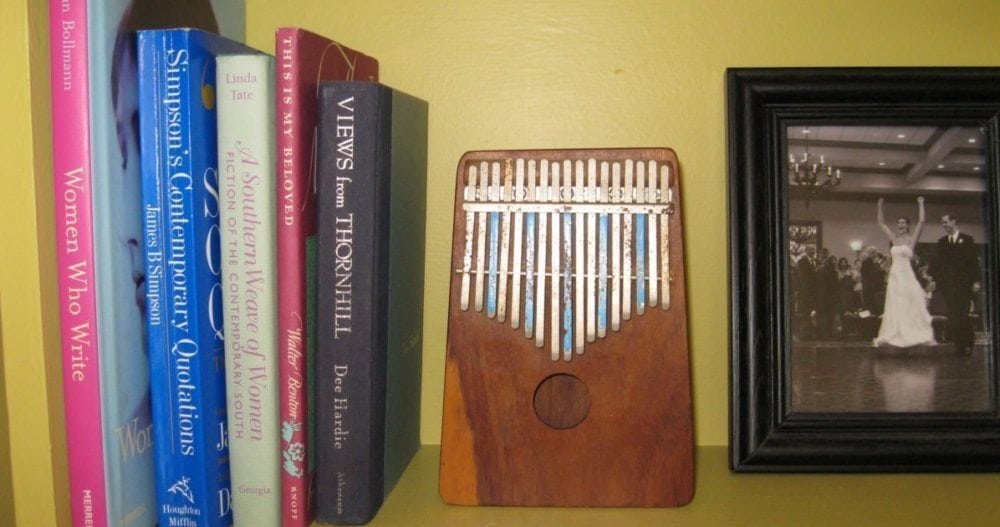 We were at the pier in Provincetown, Massachusetts, and so, so young. I watched off to the side as my boyfriend negotiated with the street vendor and eventually wore him down.

I would have just pulled a $10-dollar bill out of my pocket because I hated to negotiate as much as it fueled him.

“Is it a thumb piano?” I asked innocently.

“It’s an African Kalimba,” he said, “made of rosewood. The keys are gorgeous, aren’t they? Look at that patina!”

My boyfriend was so good at elevating things. “I wonder if I could learn to play it,” he said plunking the keys. This is not anything that would ever occur to me. We were the perfect couple, always complementing each other.

So the kalimba became his, and after two years and a wedding, it became ours. It graced our apartment, a third story walkup.

When we bought our first house, a Craftsman cottage near the university where my husband was a grad student, it went to live there, too.

It found a home on the mantle of our second home. By now we lived in Buffalo. My husband was a college professor. Sometimes we’d let our toddler make silly music on the keys.

By our third home, there were three kids, and we kept the kalimba up high on the mantle, out of their hands.

“What do you call it?” people over for dinner might ask.

“It’s a kalimba, an instrument native to Africa,” my husband would say if he got to answer first. “Made of rosewood. Used at weddings and other important ceremonies.”

“It’s a thumb piano,” I would answer if someone asked me.

It didn’t come to us quickly, but finally it came to us — that we were not the perfect couple after all. We began the dark days. Those began with lists and the intention not to fight as we divided what had been our life together.

My husband said, “You can have this,” as he handed me the kalimba.

I took it, along with the potted plants I knew wouldn’t survive without me, and the sewing basket, for which he would have no need. We got busy with our new lives, the lives apart.

My new house is small but quaint. Before I moved, I made dozens of hot summer trips to Goodwill to unload “stuff” I knew wouldn’t fit.

But I kept the kalimba. It’s on a bookshelf in my study, just to the right of my desk, a prime spot really. It reminds me of the harbor air in Provincetown that morning so long ago. And what I believed that day.

Its keys are a little rusted at the tips, a few are bent. The rosewood is still rich. Its finish belies its years. I plunk the keys. The sound is still sweet.

A Walk Down Memory Lane

GIRLFRIENDS AND SHOES ARE A LOT ALIKE