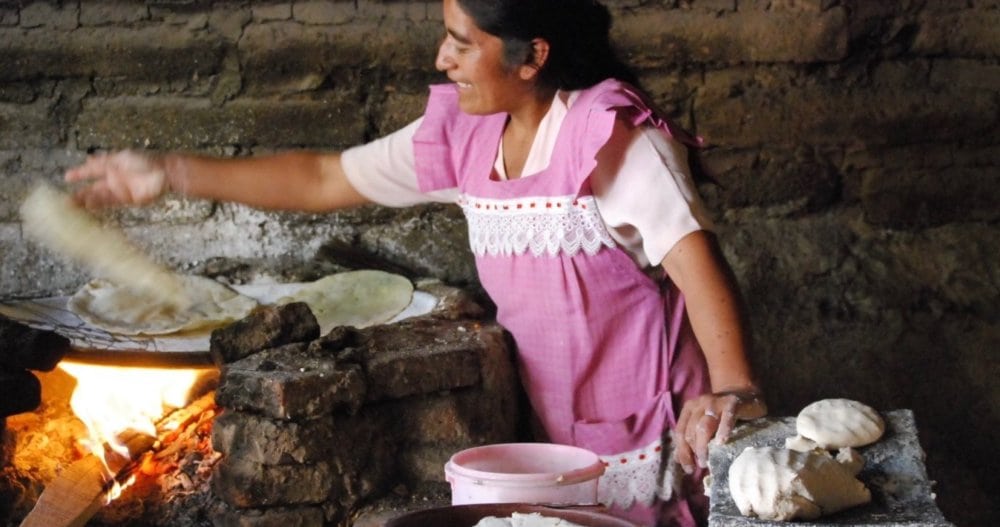 When I was unpacking my dishes and cookbooks that had been in storage for 10 years, I took a break to watch Rick Bayless’s PBS series, “Mexico One Plate at a Time.” A chef and restaurateur, Rick specializes in traditional Mexican cuisine. As he talked about the subtle, but complex dishes of Oaxaca, I was reminded of the many meals I’ve eaten in Mexico and Central America over the years.

My first husband and I and our friend, Rob, were hiking the rugged foothills of the Sierra Madre mountains in Oaxaca, searching for an unexcavated Zapotec ruin built about 500 AD. Often I walked ahead of the guys, because I loved the feeling of being on my own, thinking I might be the first outsider who’d been there.

This trip I followed my nose up the mountain toward something that smelled like a five star restaurant. I found myself near a small thatched hut on the edge of a cliff. Just inside stood two women in simple dresses and aprons.

On the floor was a log fire surrounded by rocks. On top of the logs was a sturdy iron grate that held a giant pot like we might use to steam several large lobsters. Because tourists never ventured this far, the women were shy. I smiled and said it smelled good. Their faces beamed, and they motioned for me to come closer.

One of the women got a yellow plastic plate and a corn tortilla while the other ladled something from the pot—which was at a full rolling boil—onto the tortilla. She then folded the tortilla around the contents and handed me the plate. The women stood next to one another, expectantly, their hands folded in front of them.

I took the plate and bit into the tortilla. I tasted onion, carrot, potato and serrano peppers. It was as good as it smelled. I smiled and made “yum yum” sounds. The ladies nodded and gestured for me to take another bite.

Long, spiky bristles gouged the tender roof of my mouth. Not wanting to offend the ladies, I resisted the urge to spit it out. Instead, my tongue pushed the bristles further into the corn tortilla as I chewed a tiny bite of carrot, and made more yum yum sounds.

As if on cue, my husband and our friend, Rob, walked up. I introduced them to the ladies and handed Rob the yellow plastic plate, knowing Rob would eat anything! As he bit into the tortilla, my husband saw the bristles protrude from the other end. Without hesitation, he diverted the ladies’ attention away from Rob, as Rob did a sleight-of-hand and took the meat with the bristles out of his mouth and put it in his pants pocket. Gracious to the end, Rob finished the rest of the tortilla.

I hope the ladies were never the wiser. We thanked them and continued up the mountain. I also hope they didn’t hear Rob give me a bad time for tricking him into eating the rest of my boar bristle stew.

Are You a Nomophobe? Time to Kick the Addiction