Perils of a Sold-Out Train 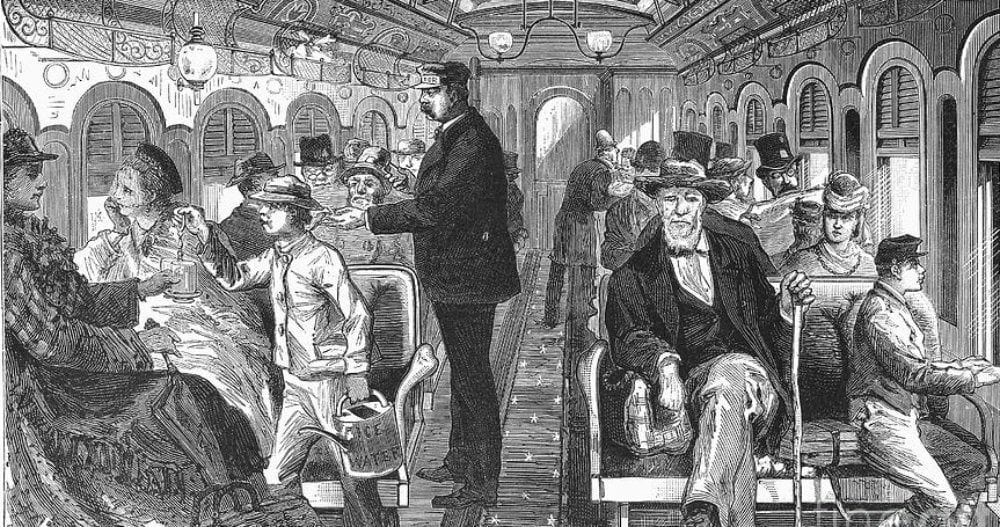 The train is sold out. I’m hoping for a seatmate who will sleep. I know there are people who have found their soulmates on public transportation, but I’m convinced I’m not one of them.

“Is this seat taken?” He’s about my age, nice looking and smells good.

During my years of work travel, I discovered a universal truth. There are two types of seatmates: Ignorers and Chatters.

“What are you reading?” He hasn’t finished putting his bag on the overhead rack.

I recognize this as a pivotal point in this relationship, which — unless magic happens — will be over in two hours. What if I make it clear that I just don’t want to talk, to anyone? What if I ignore him? The best I can do is to hold up the book so he can see the title. Then I give him lukewarm body language. Bette Davis I’m not.

I grew up in New York, so you might think it would be easy for me to find one terse sentence that would let me travel in quiet. But it’s more chronology than geography. It’s growing up in the 50s, I think, that keeps me unable to say “Please be quiet!” to the loud talker in a restaurant or the smarmy salesperson on speakerphone in the airport. I’ve just never been good at it. It came with the territory of my WASPY polite family. Golden rule, schmolden rule.

First hour down, and this is what I’ve learned: He is divorced, bad break up. He dates a lot, at least once a week. His son goes to Dartmouth. He has a Cocker Spaniel, and it has a name. Did I say he was a Chatter? He is King of the Chatters.

He does punctuate most of his sentences with, “Don’t you think?,” but I realize 25 miles in that his “question” is just a placeholder until he can catch his breath. It wouldn’t matter if I said, “Let’s get naked and see if anyone notices.” He is on an amazing one-way frequency in this conversation.

For the last 15 minutes of the trip, I retreat to nodding or shaking my head in response to what I guess he’s been saying. I take my cues from his facial expressions. Smile = nod. Frown = shake.

The doors are about to open at the station. I have just spent two hours of my life that I’ll never get back again. I have regrets about that.

“So, are you on Facebook?” he asks, as we gather our belongings.

I want to say, “Everyone’s on Facebook.” I want it to be worthy of a Maggie Smith exit line as she harrumphs out of a room in “Downton Abbey.”

In my head I can hear my parents, my grandparents, and all my aunts and uncles in some heavenly choir. If you can’t say anything nice . . .

I pretend I don’t hear his question. And then I smile. Of course I do.

The Path to Reinvention

IS YOUR PHARMACIST GIVING YOU THE WRONG MEDICATION?

Chasing My Lion With Joy